When it comes to spending money we don’ t have and calling it rescue, the nation has been there, done that, bought the t-shirt.

We call it flash policy at our shop; the frenzied do-something response, embodied in the creation of the Department of Homeland Security after 9/11, and the “shovel ready” spendulus after the 2008 financial meltdown.

The Covid-19 outbreak is different since lives are directly imperiled if face-to-face economic activity were to proceed unabated.

But seemingly no one can question the underlying process even if the cure is potentially worse than the disease. In the case of Cornoavirus, even asking for a recorded vote on the Phase 3 rescue package was deemed too extreme, and the one person tapping the brakes, Kentucky Rep. Thomas Massie (R), was demonized by both parties.

Yet there remains a distinct, widely shared queasy feeling, evident even when President Trump signed the Phase 3 Coronavirus package.

After three coronavirus recovery packages and a wait-and-see holding pattern until Congress reconvenes April 20, it is not unlikely that a Phase 4 bundle would emphasize yet more trillions, this time in infrastructure spending, since President Trump and House Speaker Nancy Pelosi alike seek it. 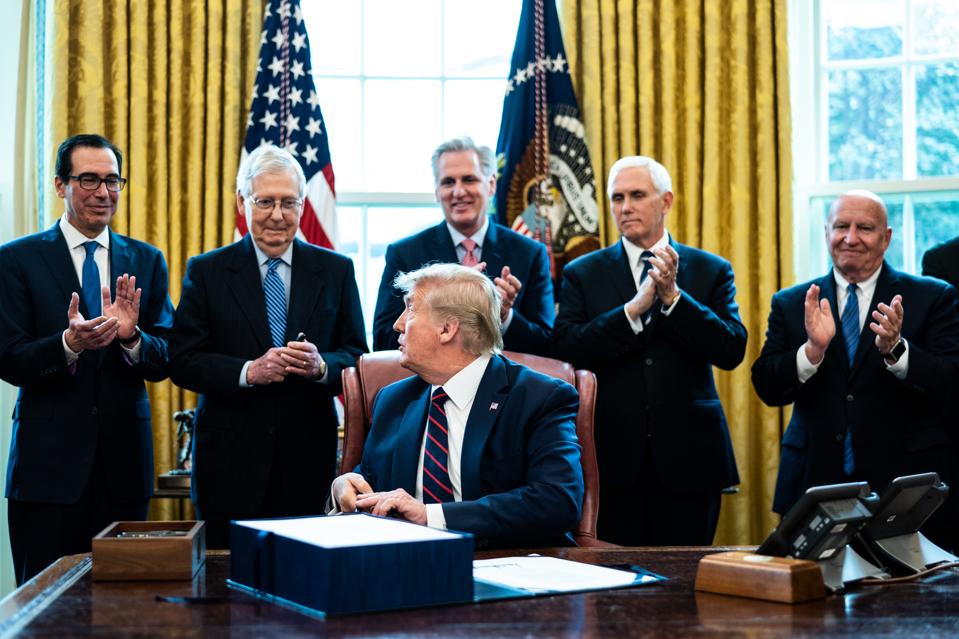 Republicans recently called Pelosi’s temporary backdown on adding a list of progressive social-policy demands to Phase 4 a pivot, yet even their protests barely conceal an underlying inclination to spend more without too much provocation.

Before it’s too late, there are alternative ways to grow private infrastructure that do not entail the reflexive default to more deficit spending.

If the Senate cedes control of negotiations to Treasury Secretary Steven Mnuchin as they’ve done so far, they’ll never wrest government back into its pre-crisis limits, just as it never reverted after 2001, and after 2008 under President George W. Bush. 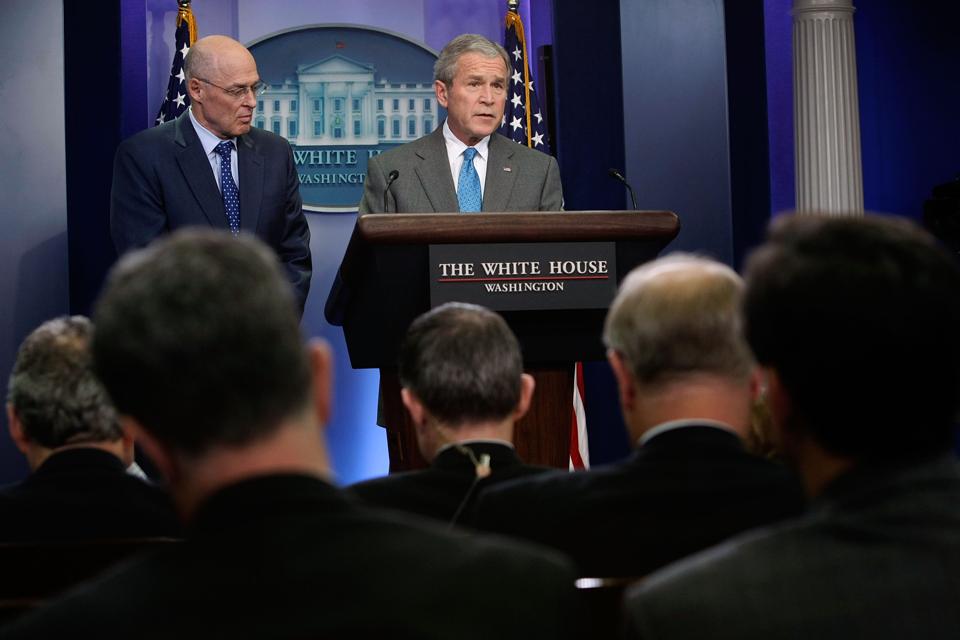 WASHINGTON – JANUARY 24: U.S. President George W. Bush (R) speaks as Treasury Secretary Henry … [+] Paulson (L) listens as he makes a statement to the media January 24, 2008 at the White House in Washington, DC. Bush made a statement on the economic stimulus package deal with the congress. (Photo by Alex Wong/Getty Images)

Mnunchin told Americans unemployment could hit 20% without bailout. Some projections now exceed 30 percent with the bailout/stimulus.

If spending is to remain the name of the game, maybe Larry the Cable Guy should get the economic recovery czar role. Paraphrasing the Blue Collar Comedy Tour star;

As an important alternative to spending, policymakers should contemplate the deeper implications of the wide range of #NeverNeeded regulations being enthusiastically rooted out and ejected by local, state, federal, even international governments to aid Covid-19 response. These reactions have been not just widespread but rapid.

Top-down rules can be relaxed not just for the medical crisis as has been the case so far, but also to alleviate the economic one that increasingly threatens not just livelihoods but lives.

In phase Four (and Five, Six and beyond if need be) the process of getting rid of #NeverNeeded rules should be amplified to regulations across the board, not relegated to health-related ones; and also applied to the operation of the regulatory process itself.

Let me say what I mean.

I’ve warned that Trump’s infamous “one-in, two-out” executive order on reducing regulations was likely to run out of steam, as the low-hanging fruit was picked, and in very important ways, it has.

But the reaction to Covid-19 has shown that E.O. 13,771 and other measures haven’t caught everything. Streamlining at agencies like the Food and Drug Administration and the Centers for Medicare & Medicaid Services implies there’s more in the tank.

For instance, at Trump’s March 30 press briefing on the Coronavirus outbreak, CMS Administrator Seema Varma described: lessening regulations so that hospitals could hire more workers without too much red tape burden; removing regulations that have stood in the way of allowing child care and other services to be provided for workers; and removing barriers to emergency room teleheath and requirements for face-to-face meetings.

What struck me most was not the specific reductions, of which there have been many beyond CMS, but Varma’s observation that this regulatory streamlining was done in two weeks, when normally revoking a regulation “takes a year.”

This is an important point about the likely prevalence of general over-regulation that the Covid-19 outbreak has “accidentally” brought to the forefront. More broadly, an observation like Varma’s implies that the 1946 Administrative Procedure Act (APA) itself, which is supposed to protect the public by allowing input and preventing regulatory abuse, has over time evolved #neverneeded elements of its own.

Generally, one can’t eliminate a regulation under the APA, but must replace it with a new one. So very likely the streamlining actions at CMS, as well as at other agencies, have involved not implemented notice-and-comment rules, but things like enforcement discretion, the use of guidance documents to clarify policy, and “interim final rules.” These latter can allow agencies to skip public notice and comment for self-proclaimed “good cause.”

It isn’t quite right to say shortcomings in the APA are being rectified by the crisis, but rather, the loopholes for agency discretion that can in normal times disadvantage the public are now being enlisted to benefit them.

This notion of shortcomings in protections of the regulated public is a longstanding issue. Over time, the Administrative Procedure Act has enabled the expansion of the administrative state by means such as the following:

The health emergency is now influencing the character of these loopholes, which tend to disadvantage or “punish” the public, in the opposite direction; an ephemeral balancing of the scales.

But this state of affairs will disappear once the crisis is over, and it’s back to (bashing) business as usual — unless Congress takes note, and action.

Impelled by the Covid-19 crisis, there’s both a fresh chance and fresh urgency for Congress to get aggressive in making these temporary light-touch-only interpretations of the APA strictures more permanent, while more broadly aiming toward restoration of Article I rather than agency lawmaking (more about which another day).

Next steps for “Phase X” stimulus packages should entail collaboration in particular between Congress, the White House Office of Management and Budget’s Office of Information and Regulatory Affairs, and the Council of Economic Advisers.

These and other bodies — in contrast to the usual spending stimulus reaction — should streamline regulatory processes in ways that help the economy (once moving again) to rebound higher, not with just temporary and targeted health-related streamlining, but with broad-based economic regulatory process liberalization.

It has become plain that, in response to Coronavirus, progressives, socialists and collectivists have not hesitated to toss in their entire wish list including the kitchen sink, the bathroom sink and toilet besides. Countries like Spain are rolling out the tragic universal basic income, while the Financial Times is calling for a UBI and wealth taxes besides. Plenty want these alien projects implemented in the U.S..

The whole country and its foundations of federalism and individualism are perilously in play, and opponents of these principles are playing for keeps and using Covid-19 as a lever. (”Constitution Dies of Coronavirus,” jokes the Babylon Bee.)

There is a classical liberal alternative to the statist opportunism prevalent today. The starting line for it now is to grab the low hanging fruit of ending the capriciousness of regulation, and generalizing the liberalization we have seen at health-related agencies to the economic sphere.

That means adopting some pro-human reforms of the Administrative Procedure Act that allow much more flexibility for the regulated public, small business in particular. As we ponder #NeverNeeded directives, it’s worth revisiting not just regulations but the underlying statutes and agencies that govern us, too. Phase “X” and beyond.

One template for such reformats could be the Regulatory Accountability Act; there are others. Indeed there is no shortage of serious and longstanding regulatory liberalization measures — including bipartisan ones — that deserve time in the spotlight while spendulus takes a break in the shadows.

To expand upon these, later we’ll likely take a deeper look at some of these “#Needed” reforms that should accompany #NeverNeeded regulations.

‘Avengers’ And ‘Avatar’ Are Returning To China, So...

3 Industries That Should Prepare Now For Post-COVID...

Alexa, Order Me A Pizza!…And Other Small Business...