How To Navigate Regulation Crowdfunding With Crypto And Blockchain

Read this article to learn from a seasoned entrepreneur who has been working for 20 years at her craft how to take advantage of SEC Regulation Crowdfunding. Regulation Crowdfunding is an exception at the SEC that allows companies to raise up to $1,070,000 through an online platform to the public. She found that to receive the necessary SEC approval for her second crowdfunding campaign, it was unspoken but necessary to drop the use of crypto and blockchain. From challenging the typical way of raising money through venture capital to navigating the U.S. regulatory landmines for fundraising, this is a story you do not want to miss. 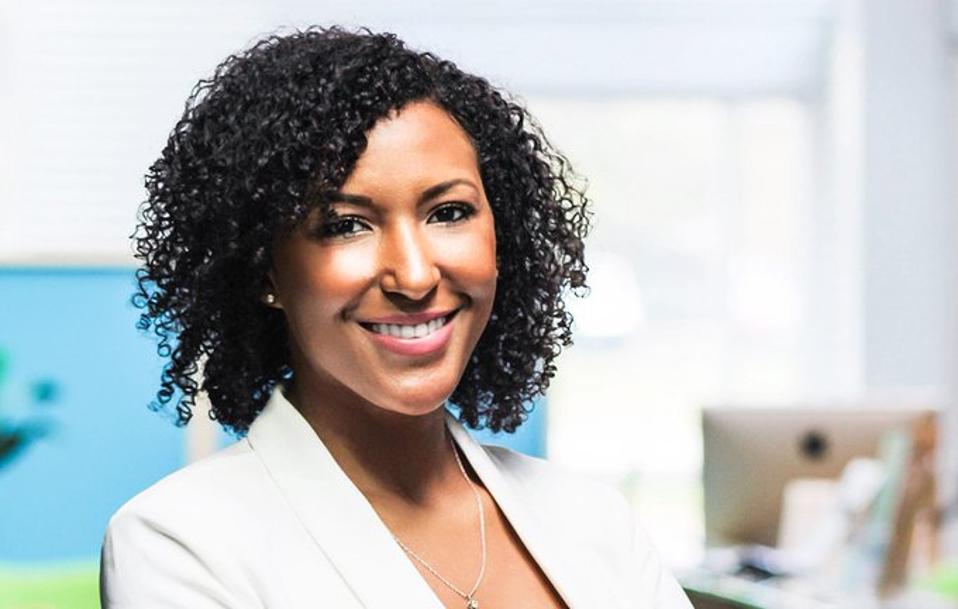 Dawn Dickson is the founder and CEO of PopCom, a company she has been working on since 2012 that is an automated retail technology company with a hardware and software (SaaS) solution for self-service retail. Essentially, PopCom makes vending machines and kiosks smarter by allowing retailers to collect important analytics at the point of sale and deliver targeted content, similar to how Google analytics analyzes web traffic.

With her business involving automated retail technology and self-service machines, the COVID-19 pandemic has resulted in increased demand for her company’s products, making her investor pitch that much easier. Dickson is the first Black woman to raise over $1 Million under SEC Regulation Crowdfunding (Reg CF) using a security token offering (STO). Currently in the middle of her second Reg CF, PopCom has raised $800,000 in about a month and a half.

And if you believe you can start up a technology company easily, she will tell you to start by getting an education in technology first and prepare for months and months of planning before you go to investors – privately or publicly – to raise money. And if asked about her achievement in her first crowdfunding campaign, Dickson will highlight that she formerly had become the first woman … not just the first black woman … to raise $1 million using a blockchain token offering. And as for a disadvantage, according to Dickson, being a graduate from The Ohio State University as opposed to a coastal college and living in the flyover state of Ohio were her biggest obstacles to raising capital for her business. The obstacle of not having the right network to fundraise for her company were the motivation to seek equity from the public.

‘The Jobs Act by Obama leveled the playing field and access to capital for businesses and allows leverage community from accredited and non-accredited investors,’ Dickson explains. For early stage deals where a company is not yet publicly traded, she notes, ‘…an accredited investor needs to make $200,000 as an individual or $300,000 if you are married, and have $1,000,000 in net worth’. Dickson notes these investors are the ‘…same people over and over again who are benefitting from the success of these early-stage companies where the wealth is circulated around the same group of accredited investors.’ Dickson explains she educated herself about how to do a crowdfunding campaign, as has been made possible by President Obama with the Jobs Act. She realized she had families, friends, and a community of supporters that were not accredited investors, but were educated investors with disposable income and understood the risks and rewards of an early-stage investment in a company.

Dickson’s time spent in TechStars built her credibility and helped teach her how to raise private venture capital. She notes that, to date, PopCom has raised over $3 million, of which the first million was raised from venture capital and accredited angel investors in 2017-2018. However, it was in 2019 when she took the leap to do a crowdfunding, and it was not an easy decision. When she did her first crowdfunding campaign, Dickson was out of ‘runway’ and spent her last $10,000 to pay for the platform and audited financials to conduct the 2019 campaign. Dickson notes, ‘No institutional investors were supportive of crowdfunding because it takes control out of their hands. They did not teach me about crowdfunding and, no, they did not support it. One investor actually said to me, if you do this, I will never follow on [with an investment]’. 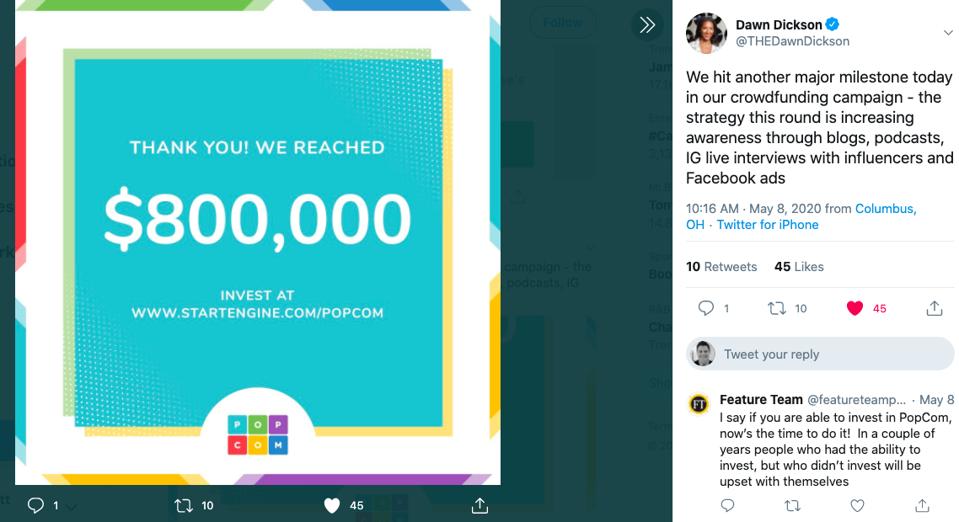 That campaign, Dickson states, was the, ‘…First time people had really seen on a mass level a black person [who] does something like this,…[as I was the] first black female founder, first female founder to raise million dollars in a crowdfunding campaign,’ Dickson proudly proclaims. Her first crowdfunding campaign was oversubscribed, with $1.3 million, and now, she is at $800,000, closing in on the $1,070,000 limit for this campaign.

Dickson noted that for her, the preparation to be able to answer any question during the fundraising and to not do it defensively is key. ‘In the VC world $1,000,000 is not a lot of money, but with crowdfunding, people are like you blew the money from 2019 already?’ states Dickson. She also emphasizes that a person should really start with going to school and learn about technology before starting a technology company. She cautions that, ‘…[to build a] tech company, you must have technology education, either whether you go to school for it or you go to Techstars or Y Combinator or [another] accelerator to get the proper mentorship and education to grow a company, to build a team, to give yourself credibility, to grow your network.’

This time, her crowdfunding campaign provides equity in the company in the form of stock certificates and is not a token sale. While the last round was a token offering, Dickson comments the SEC does not fully support token offerings. ‘They act like they are okay with crypto and blockchain but their actions show the opposite,’ states Dickson. In that the benefit would be selling the tokenized shares for liquidity on a secondary trading platform, until the SEC decides to approve this, there is no real benefit to having a ‘crypto’ security token offering anyway. A token is a digital version of a share instead of a paper share; the primary benefit of using a token for funding is so you can sell the token for liquidity. 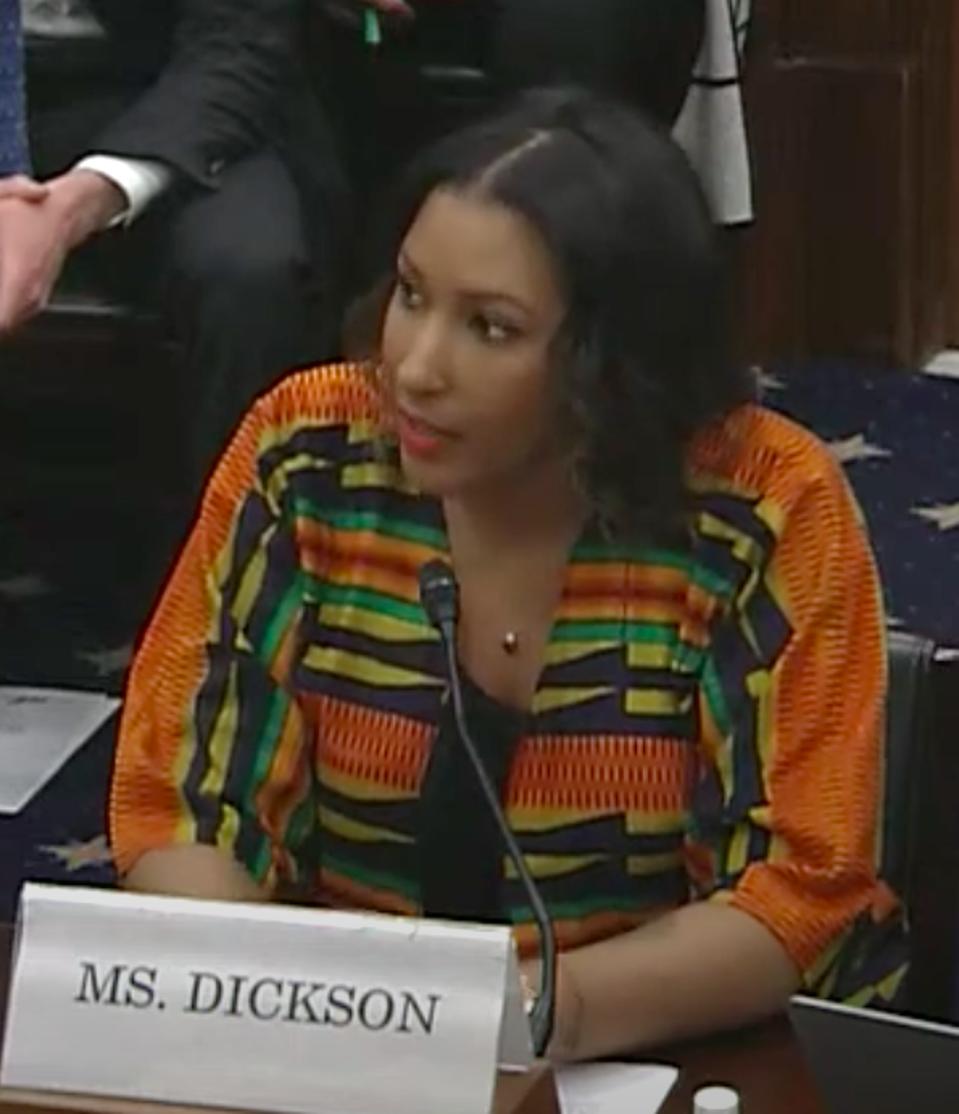 Dawn Dickson, Founder and CEO of PopCom, testifying at a U.S. Small Business Committee Hearing on … [+] March 4 called ‘Building Blocks of Change: How Small Businesses Can Benefit From Blockchain Technology’

Additionally, these investors could possibly have the option to convert to a tokenized share if the SEC does clear the way for a secondary market. However, for this fundraising round, it was removing any signs of using crypto in her offering. ‘If we included crypto or tokens in our offering document we did not feel confident that the SEC would approve our offering. It’s an unspoken rule. Our new page has no mention of blockchain because they [the SEC] don’t like it,’ Dickson explains.

‘I testified before Congress to help legislators understand the negative stigma put on blockchain is because of bad actors, and they are restricting companies that want to use this technology for good…Should people quit using the fiat dollar because some people are scamming with that?’ Dickson exclaims. When asked if she thought the SEC has a bias against tokens, and if so, where she believes this resistance to tokenized securities comes from, Dickson answers quickly, ‘2017. When many people were becoming millionaires from Bitcoin and the government and banks could not control those markets. That’s just my opinion.’

Dickson encourages people to look into the fact that with COVID-19, the SEC has provided relief and made it even easier to crowdfund, making it a great time to learn crowdfunding. Crowdfunding can be for as little as $50,000 to $100,000 to get the minimal viable product going, according to Dickson.

With her second crowdfunding campaign almost concluded, Dawn Dickson will be someone to watch. Her leadership is already illuminating some of the real-world challenges of navigating as a crypto or blockchain company. Most importantly, she has opened the door to a new class of thirsty investors using blockchain tokens and blockchain technology for crowdfunding.

How to Stay Creative With an SEO-Driven Content Strategy

WWE Money In The Bank 2020 Results: Will Fans Turn On Drew McIntyre Like They Did Seth Rollins?