Breaking
Three Essential Components of a Successful Small Business
Pandemic Pet Adoptions Add To Chewy’s Tailwinds, But...
How to Use LinkedIn’s Social Selling Index Like...
Strong Revenue Trend Could Drive EXACT Sciences Corporation...
9 Things To Know Before Starting A Business
‘Game & Watch: The Legend Of Zelda’ Will...
The 9 Fundamental Components Of A Startup Pitch...
How to Get Results from Broken Link Building
Florida Supreme Court Tells The American Bar Association...
How to Write Perfect Paid Social Media Marketing...
How Restaurants Can Design a More Sustainable Food...
Expenses That Small Business Owners Need to Be...
How You Can Make Saying Goodbye To The...
Biden To Meet Royal Family At Cornwall’s Eden...
It’s Going To Be Emotional — Going International...
Peer Mentoring For Students: STEM & Buds
Home Finance How To Overcome Major Life Setbacks
Finance 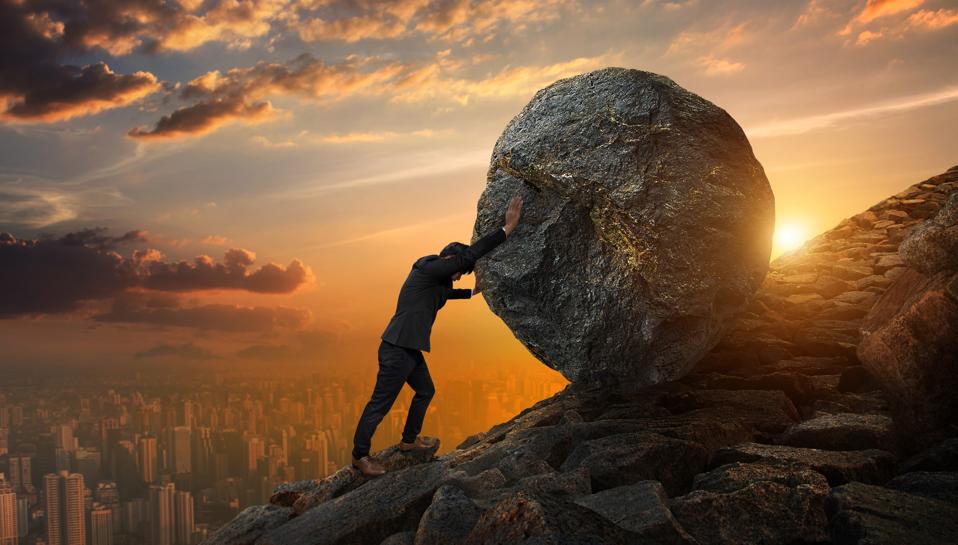 What if the mountains we face actually aren’t molehills?

A few years ago, I met with a portfolio manager who had a long track record of success. He had built a large position in the stock market, but felt that the market had perhaps gotten ahead of itself in the short run. As a result, he hedged his position with a second large position in volatility instruments. The idea was that if the market went down, this would likely occur on increased volatility, cushioning the downside. What he did not realize is that many other managers had hedged similarly. When the market moved much lower faster than anyone expected, those managers fled for the sidelines to avoid early year losses. They bought back their volatility positions and sold their equity holdings. What had looked like a good hedge now created a double loss for my portfolio manager. Within the space of a couple of weeks, he faced dramatic losses in his book, a cut in the capital he was allocated to trade, and a stern message from management that further losses could result in his dismissal from the firm. To use his phrase, he was facing a “career ender”. If he were to draw down further, no one would hire him after such a blowup.

My challenge as his psychologist was that his assessment was absolutely correct. In the existing job market, his dilemma would make him close to toxic to other hedge funds. It’s one thing to help people who blow events out of proportion and then suffer from anxiety, uncertainty, and frustration. It’s quite a different matter to help people recover from truly severe setbacks. How do we recover when we lose our dreams, lose our health, lose our loved ones? These are all-too-real and life-impacting setbacks; how can we move forward in their wake?

Imagine the situation of Viktor Frankl, who, shortly after beginning his book Aerztliche Seelsorge (”The Doctor and the Soul”), decides to not emigrate to the United States so that he can be with his father. He and his family are apprehended by the Nazis and his pregnant wife is forced to abort their child. They are sent to a ghetto and then a concentration camp, where Frankl’s father, wife, and mother die. Beset with typhoid fever, Frankl avoids complete collapse by focusing on reconstructing his book on small pieces of paper. When the concentration camp is liberated, he returns to his profession as a psychiatrist and is granted a teaching appointment based upon the book he has reconstructed. In nine days time, he dictates yet another book, Man’s Search for Meaning, which has become his most famous legacy. The thesis of that book is that we can overcome life challenges by finding a purpose in life and immersing ourselves in imagining and working toward the fulfillment of that purpose. Revealingly, the original title of the book was “Nevertheless Saying ‘Yes’ to Life: A Psychologist Experiences the Concentration Camp”.

If anyone deserved to be overwhelmed with grief, trauma, loss, and depression, it was Frankl. His ability to focus on the meaningful purpose of recreating his book enabled him to nevertheless say “Yes” to life. The Heal Grief organization, which has assembled a wide range of resources to help people deal with loss, chose the hummingbird for its symbol, as the hummingbird seemingly becomes lifeless in the cold weather, only to be “resurrected” when the temperatures warm. The idea is that, in memorializing those we’ve loved and connecting to the larger meanings and influences of their lives, we can achieve a similar rebirth. The key, Frankl recognized, is finding a purpose that gives meaning to our setbacks and sufferings. Fascinating research described by Lydia Denworth finds that having a sense that life is worthwhile not only benefits our moods and health, but also is associated with greater positive life changes over a next four-year horizon. This is the value of the Option B described by authors Sheryl Sandberg and Adam Grant: when we find meaning in adversity, we build our resilience and increase our ability to move forward constructively.

Psychologist Seth Gillihan recently described lessons he has learned from a lingering debilitating illness, including accepting the situation for what it is and practicing self-compassion. Being kind to oneself, he notes, includes seeking out sources of support and reminding yourself that you’re doing the best you can. In other words, during the severe setback, you become your own support system and expand that system with the right people. Gillihan’s podcast with Dr. Jill Carnahan, who has suffered from her own chronic diseases, points out the importance of “meaning and purpose” during times of setback and sustaining a belief that something better lies ahead. Through this resilient mindset and a sense of faith and purpose, they note, we can find a “diamond” in the midst of our pain and uncertainty. This very much mirrors Frankl’s experience. He was not just sustained in the concentration camp by a positive attitude, but by an active sense of meaningful purpose. As Gillihan shared with me recently, “ I felt like I discovered my spirit at the depths of my illness and depression, and it’s what pulled me back from the brink.”

That has been my experience working with people who have experienced profound setbacks. They emerge, not just by coping, but by connecting to a deeper, more meaningful sense of self. From pain and uncertainty, they connect to a renewed sense of purpose. Sometimes this occurs through religious faith, sometimes through social support, and sometimes through the guidance of a helping professional. My portfolio manager came back from his brink, but the experience changed him forever as a risk-taker. He became more diversified in his approach to markets, spent increased time generating arrays of non-correlated ideas, and built a team to support him in these efforts. He learned that he was an effective team leader, and he affirmed that he was a creative and fertile idea generator. In a very real sense, he became a different money manager. His return from setback, like Frankl’s, like Gillihan’s, required a renewal, a rebirth, and a discovery of his spirit. We overcome major life setbacks by connecting with the essential self that is never lost.