Breaking
Want to Boost Your Business Marketing? Hire a...
What We Know—And Don’t Know—About Biden’s And Trump’s...
The FDA Will Not Inspect Vaccine Production Plants
Three Things Newborns Can Teach CEOs
Got Negative Feedback? Nine Smart Strategies For Handling...
Inclusive Hiring: How To Address Bias In The...
Trump On Student Loans
SAP BrandVoice: How A Synchronized Supply Chain Addresses...
How To Create A Culture Of Appreciation In...
How To Drastically Improve Your Mobile Conversion Rate
China’s Alibaba And Ant Group Billionaire Jack Ma...
The Adorably Cute ‘Part Time UFO’ Is Now...
Trump Will End H-1B Visa Lottery
In The Hot Seat With Forbes Advisor India:...
New Zealand Apparel Brand Aims To Go Entirely...
Among Republican-Led Rural States Vermont Is Vastly More...
Home Technology How To See A ‘Solstice Shooting Star’ On The Longest Night Of The Year North Of The Equator
Technology

At a specific time—4:19 a.m. Universal Time on Sunday, December 22, 2019—the sun hangs over the Tropic of Capricorn in the southern hemisphere at midday before turning back. As the sun creeps northwards, it will appear higher in the sky above the equator and the days will slowly get longer.

Our seasons are all down to the 23.5º tilt of Earth’s axis, which means each hemisphere gets a differing amount of sunlight during the planet’s annual orbit of the sun.

Is solstice something you can see?

Not exactly—and not normally—but a well-timed cosmic coincidence in 2019 makes it easy to visually appreciate the solstice by seeing a nicely positioned shooting star or two in a very meaningful place in the night sky.

Is the solstice a stargazing event?

If you happen to live in a part of the world where the solstice occurs at midday—in this case, that’s China, the Philippines, Brunei and Western Australia—then you could glance in the Sun’s general direction and give it a knowing nod (though NEVER actually look at the Sun!).

However, in 2019 there is a great way to mark the solstice visually, and that’s by looking for a shooting star or two from the Ursid meteor shower (though this meteor shower is only visible from the northern hemisphere). 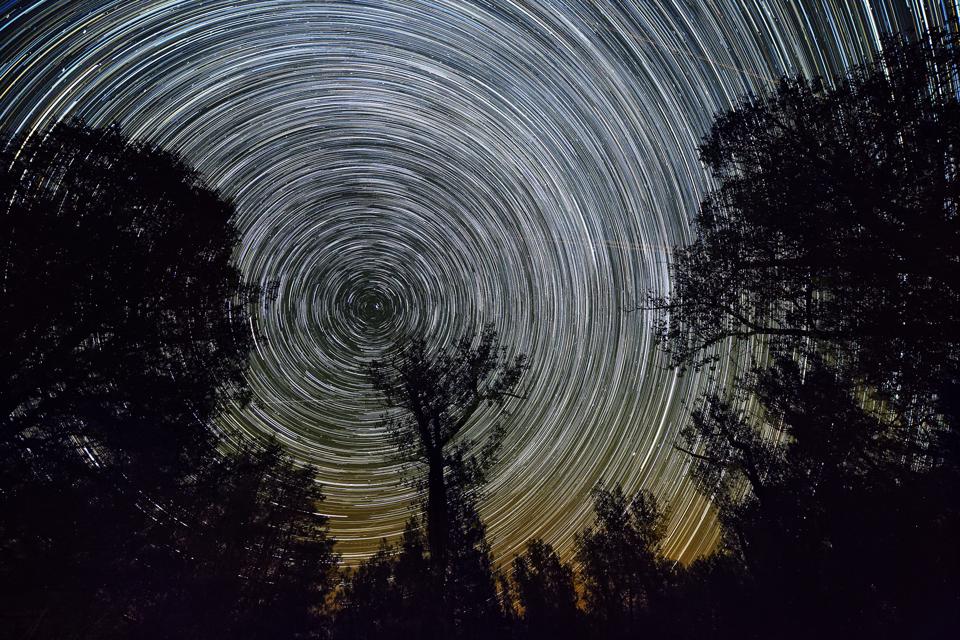 A startrail taken from Theodore Roosevelt National Park in North Dakota, which shows where the North … [+] Star is—close to the “radiant point” of this weekend’s Ursids meteor shower.

What is the ‘cosmic coincidence?’

It’s all about timing, tilt, and the North Star. In North America, the winter solstice actually takes place on Saturday, December 21, 2019 at 11:19 p.m. EST. That’s exactly when (given a clear sky and a very warm jacket) you should be outside looking at the peak of the Ursid meteor shower. The coincidence comes from the Ursids also happening to originate from the constellation of Ursa Minor, which contains the North Star—Polaris—which Earth’s 23.5º axis points at.

Solstice and Earth’s seasons are all about that tilt.

When to see ‘solstice shooting stars’

Due to peak after dark on December 21 and into the early hours of December 22, the Ursid meteor shower only brings forth about 10 shooting stars per hour, so you will have to be patient. If it’s a 100% clear night and you can stand the cold, this is a fabulous night to go stargazing. Not only is the sight of a shooting star streaking across the night sky a great way of marking the arrival of the solstice, but where it happens in the night sky is key to understanding Earth’s tilt and its ever-changing seasons.

If you want to understand Earth’s place in the cosmos, seeing some “solstice shooting stars” is a great place to start.