Breaking
Looking To Improve Efficiency In Your Business? Here’s...
AI and machine learning for business
How Social Media Changed the World
Shopify: The Pros and Cons
Should your business go green?
Expanding Your Business Into Spain: What You Need...
Essentials For Your Office Coming Out Of COVID-19
What Can Marketers Learn From Digital Cults?
Why NASA’s James Webb Space Telescope Will Never...
Increasing HR Effectivity and Efficiency through Software Solutions
The Difference Between Building A Startup In Bull...
Fluor Corp Ranked Among Today’s Top Shorts
Common Pitfalls to Look Out for When Buying...
Will the Olympics go ahead this year?
Pack Up the Big Top: Insights from MozCon...
Best WordPress Themes for Blogs
Home Technology How To See The ‘Manhattanhenge Effect’ Every Evening Through July 12
Technology

How To See The ‘Manhattanhenge Effect’ Every Evening Through July 12 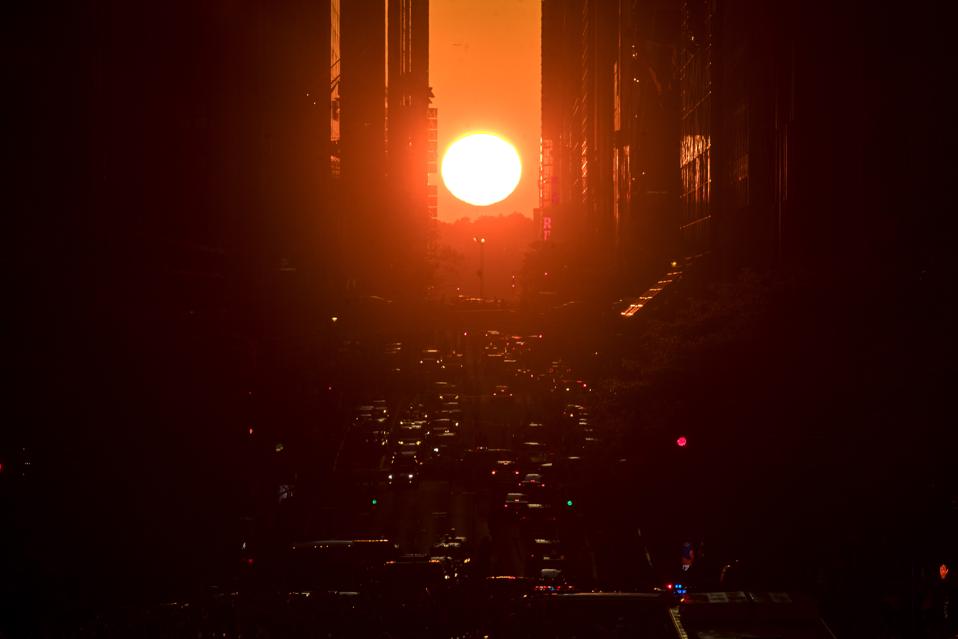 A view of the sunset from 42nd street is seen during the ‘Manhattanhenge’ on July 12, 2019 in New … [+] York, United States. (Photo by Atilgan Ozdil/Anadolu Agency/Getty Images)

Did you miss the first two “Manhattanhenge” sunsets to strike New York City in 2020? Most did—even Manhattanites—so here’s when to see the next ones (you won’t have to wait long), and how to get the “Manhattanhenge Effect” every evening through July 12.

It’s the sight of the Sun either rising or setting while it “kisses the grid” of Manhattan in New York City. The city’s famous grid system of streets is aligned with the Sun, and for four sunsets and four sunrises every year anyone in Manhattan can stand in the middle of any of the east-west crossing numbered streets on the grid and see a “Manhattanhenge”.

On those mornings or evenings the Sun is very low on the horizon between skyscrapers, and it’s a stunning sight that regularly has Instagram going insane.

When and why did ‘Manhattanhenge’ happen?

On Friday evening a “half Sun” set on the grid as seen from any street with a clear view west to the Hudson River. On Saturday evening, a “full Sun” did the same thing. Tonight—Sunday—the Sun will set just a little higher, so it won’t “kiss the grid.” The next night, the Sun will pass through the skyscrapers a little higher, and just before sunset, becoming less and less of a spectacle through June 20’s summer solstice, when the Sun will set at its most northwesterly point. After that date, the sunset point will drift back south again, being visible lower and lower between buildings before two “Manhattanhenges” strike again. 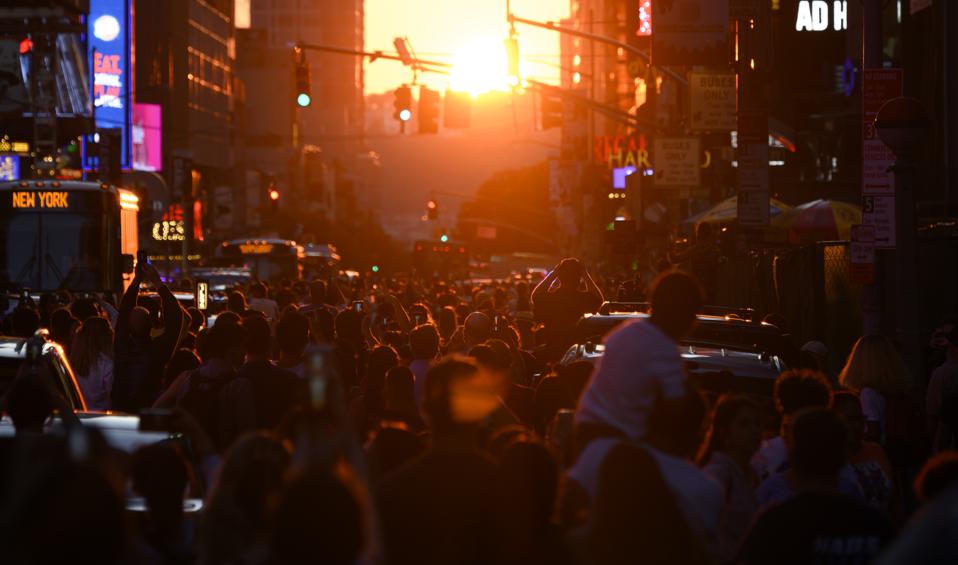 People take pictures of the sun setting over Manhattan on 42nd Street during the so called … [+] “Manhattanhenge” on July 12, 2019 in New York City. – Manhattanhenge happens four times each year, when when the sun rises or sets in New York City parallel to the city street grid in Manhattan. (Photo by Johannes EISELE / AFP) (Photo credit should read JOHANNES EISELE/AFP via Getty Images)

How and when to see the next ‘Manhattanhenge’

The next “Manhattanhenges” will occur on these dates and times in Manhattan, New York City:

What is the ‘Manhattanhenge Effect?’

It’s watching the Sun’s position at sunset change each night between the two “Manhattanhenge” evenings. “Given that this is not a time to be gathering outside, there is what’s called the ‘Manhattanhenge Effect’ to look out for,” says Jackie Faherty, Astrophysicist at the New York City’s American Museum of Natural History, who calculates and publishes the exact times and dates for Manhattanhenge each year. “Once the Sun hits the grid of Manhattan, it stays there, it just gets a little higher every single day—this is the Sun crossing the grid of Manhattan,” says Faherty of what Manhattanites are about to witness.

Although it’s when it sets at the intersection of the city that “Manhattanhenge” gets all the buzz, Faherty says you can get an amazing photograph of the Sun crossing the grid anytime between May 29 and July 12.

“So don’t think of “Manhattanhenge” as a moment—think of it as this awesome thing that happens in the summer in New York City when you get these gorgeous sunsets from May 29 through July 12.”

What is the science behind ‘Manhattanhenge?’

It’s a reminder that we’re living on a planet that’s spinning on a tilted axis as it orbits the Sun. “Stand at a given point and every single day of the year you can watch the Sun rise or set, and if you’re watching carefully—which ancient astronomers and ancient people did—you’ll notice that the Sun’s apparent position when it rises and sets appears to change ever so slightly every day across the entire year except for two days of the year, the solstices,” explains Faherty. “On the winter solstice and the summer solstice it appears to just stop at a point and then reverse its position.”

It may not feel as if we’re living on a planet that’s rotating on a tilted axis, but the evidence is all around us.

Survey: Nearly 30% Of Americans Are Self-Employed