Home Technology How To Take A Selfie On Mars
Technology

How To Take A Selfie On Mars 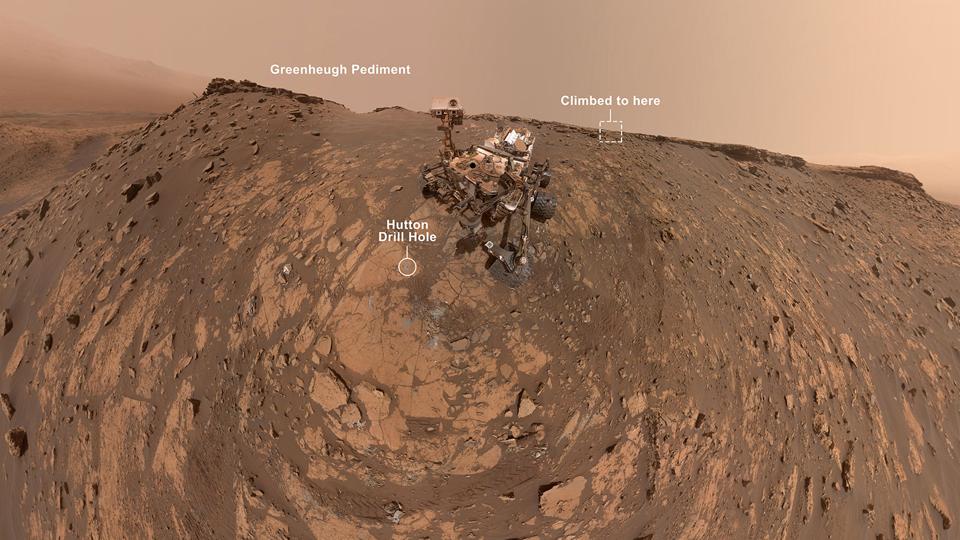 The image is distorted by Curiosity’s camera.

NASA’s Curiosity Mars rover recently took a dramatic selfie on the slopes of Mt. Sharp, just before starting its steepest climb ever.

The rover sent home a composite photo of itself posing proudly in front of the hole it had just drilled in the bedrock of Mt. Sharp, with a steep, crumbling rock outcrop called Greenheugh Pediment standing starkly against a dusty Martian sky in the background.

As Curiosity prepared to start its record-setting climb, it paused to film a quick tutorial video with the black-and-white Navigation Camera mounted on its mast (the component that looks a bit like it should be the rover’s head, adorable wide eyes and all).

“We get asked so often how Curiosity takes a selfie. We thought the best way to explain it would be to let the rover show everyone from its own point of view just how it’s done,” said Doug Ellison, Curiosity camera operator at NASA’s Jet Propulsion Laboratory, in a recent press release.

Curiosity’s version of a selfie stick is actually a robotic arm with a small camera called the Mars Hand Lens Camera mounted on the end. The camera usually works like a human geologist’s magnifying glass, giving Curiosity and its human handlers a closer look at the texture of rocks and sediment. But Curiosity can also turn the camera to face itself.

It takes several photos to piece together a rover selfie, because the camera only captures a small area in each image. But the result is pretty cool.

Curiosity took its latest selfie on February 26, the 2,687thMartian day (or sol) of Curiosity’s mission; a few days later, the rover started up the steep slope of Greenheugh Pediment. At one point in the climb, the rover tilted at 31⁰ (just shy of the now-dormant Opportunity rover’s 32⁰ record). Curiosity can safely tilt up to 45⁰ without falling over, but 31⁰ is a steep enough drive to cause the rover’s wheels to spin in place. It was a tough climb, but 9 days and 3.4 meters (11 feet) later, Curiosity reached the top of the pediment on March 6 (sol 2,696). And we have a selfie to mark the moment.

Classic Reading For our Quarantined Times