Breaking
5 TikTok Growth Hacks You Need To Know
Zynga Stock Looks Attractive At $9
How Russian Thieves Use Dark Web To Get...
France Off Travel Corridors And FCO Exempt List
Ask Ethan: Why Are The Moon And Sun...
When To See The Moon And The Planets...
IRS-CI Involved In Largest-Ever Seizure Of Terrorist Organizations’...
The Check Really Is In The Mail. After...
Epic Games Vs Apple: Why You Won’t Be...
Senator Kamala Harris Proposed A Bold Tax Credit...
Deal Terms To Reduce The Risk When Buying...
Multiple Sclerosis Drug Shows Promise For HIV Prevention...
The Neglected Piece Of Retirement Planning
It’s No Longer A Viable Option For Capitalism...
Virtual Credit Cards: An Extra Layer Of Protection...
Lessons From The Rainforest: Human Health Leads To...
Home Technology How To Watch The Decade’s Final Rocket Launch, China’s Game-Changing ‘Long March 5’
Technology 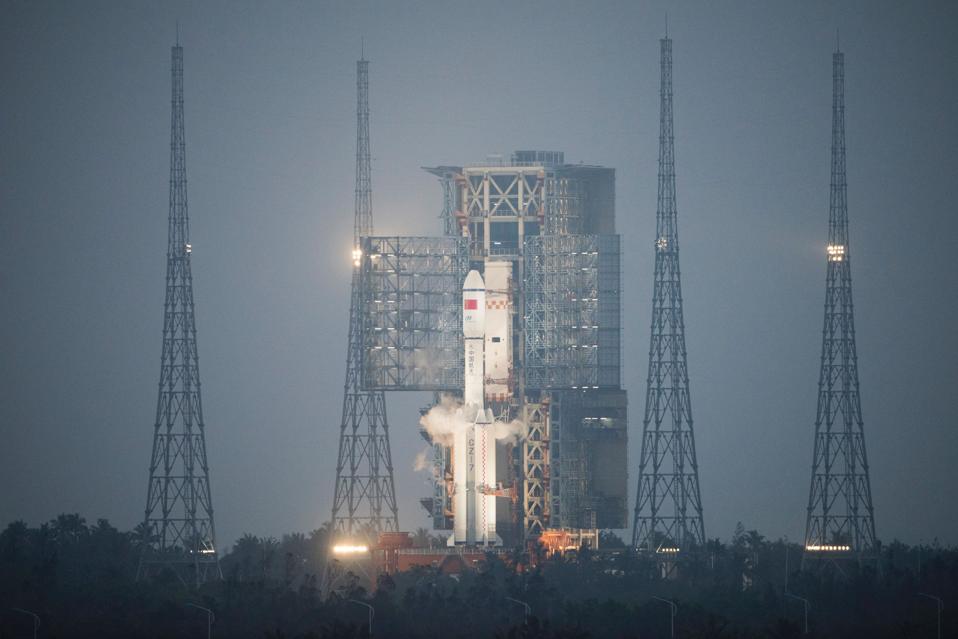 China is about to launch a massive new rocket that, if successful, will pave the way for a new Chinese space station and daring missions to the moon and even Mars—and all in 2020.

Due to take place on December 27, the stakes are high for the Long March 5 and the China National Space Administration (CNSA), not least because the rocket has been meticulously worked on by engineers since it failed to get to orbit during its first outing in July 2017.

How many rockets does China launch?

The return-to-flight mission of the Long March 5 will be rocket launch number 34 for China this year, which is more than any other nation for the second year running. “Russia is on about 20 launches, the U.S. on 23, and China is on 33—it’s way ahead,” says Brian Harvey, author of China in Space: The Great Leap Forward, which has just been updated to include details of China’s successful Chang’e-4 mission to the far side of the moon. “The how-many-rockets-have-you-launched metric only has a particular value, but I don’t think a few years ago we would have expected to see China launching more rockets than anyone else,” says Harvey.

Back in the 1990s China was launching one or two rockets each year. However, two of China’s 33 launches did end in failure, and that’s also something that the Long March 5 has to overcome. 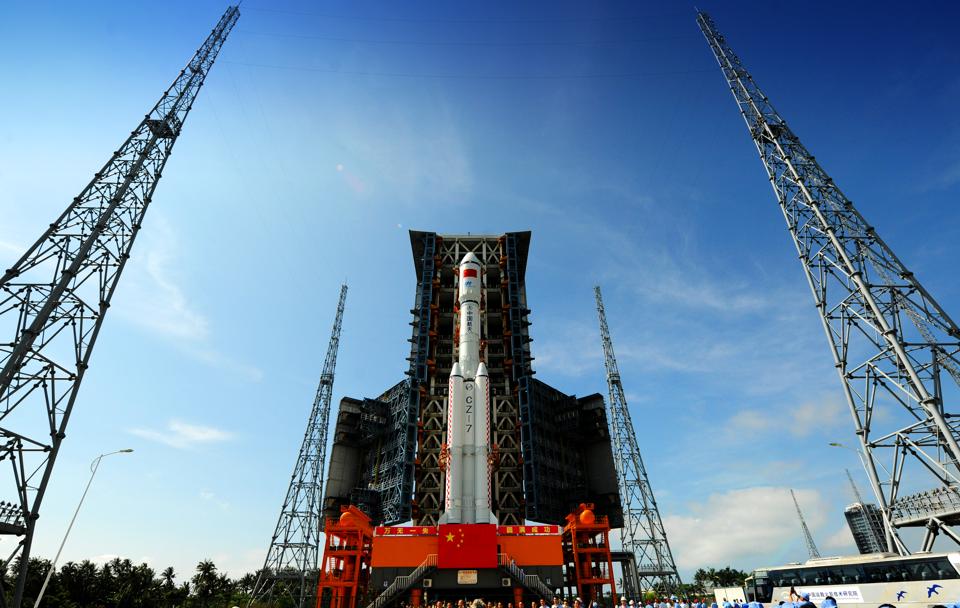 WENCHANG, CHINA – APRIL 17: A Long March-7 Y2 carrier rocket carrying the cargo spacecraft Tianzhou … [+] 1 moves from testing center to launch area on April 17, 2017 in Wenchang, Hainan Province of China. China’s first cargo spacecraft Tianzhou 1 will be launched between April 20 and 24 in Wenchang. The spacecraft is expected to rendezvous and dock with space lab Tiangong 2 later in the space. (Photo by Sun Hao/Visual China Group via Getty Images)

What is the Long March 5?

A heavy-lift rocket, it’s China’s largest carrier rocket, code-named CZ-5. It’s capable of carrying 20 tonnes into orbit, which puts it alongside ULA’s Delta IV Heavy and the European Space Agency’s Ariane 5. “The Long March 5 is a quantum step forward for China,” says Harvey. It will allow much more ambitious space missions including the launch of three of the first modules for its Chinese Space Station (CSS) space station—something that will almost certainly outlive the ISS—its long-planned Chang’e-5 mission to return rocks from the lunar surface, and its Huoxing mission to Mars.

What is the Long March 5 carrying into space?

When it launches from the Wenchang Space Launch Center in Hainan it will attempt to put a new Shijian 20 communications satellite into orbit. It replaces one called Shijian 18 lost on July 2, 2017 when the Long March 5 rocket’s first stage engines failed, the rocket didn’t get high nor go fast enough, and the satellite didn’t make it into orbit. Long March 5 has been grounded ever since. “They’re being deadly thorough,” says Harvey.  This launch is delayed from November 2018, January 2019 and July 2019.

When is the Long March 5 launch?

The lasts information suggests that it will take place on December 27, 2019 according to Spaceflight Now’s launch schedule. Other great sources include Go Taikonauts! and Andrew Jones, a journalist reporting on China’s space programme for Space News and the Planetary Society. It’s also worth keeping an eye on the official state-run press agency, Xinhua News Agency, and the page of Stephen Chen at the South China Morning Post for specific timings for the launch of the Long March 7.

How to watch the Long March 5 launch online

The event is very likely to be screened on channel CCTV-9, which is operated by Chinese state broadcaster China Central Television. Check the above link for live streams, but also this hub page for CCTV-9.

How important is the Long March 5 launch?

Although the launch itself is merely to take a communications satellite to geostationary transfer orbit, its success is pivotal to China’s long-term plans. Roadmap 2050 has China poised to build a big and permanent space station, create a self-sustaining lunar base on the lunar surface and even on Mars. It also has plans to visit the moons of Jupiter.

What is the Chinese Space Station (CSS)?

China is planning a large modular space station. “China really needs a powerful rocket capable of taking 20 tonnes into space to take into low-Earth orbit the modules for its space station,” says Harvey. That’s because the core module, called the Tianhe (“harmony of the heavens”) weighs 20 tonnes, as do two other modules. “China’s space station program is grounded until it can get the Long March 5 operation,” says Harvey. The CSS is due to be completed by 2022. “The Tianhe core module is completed and ready to go.” 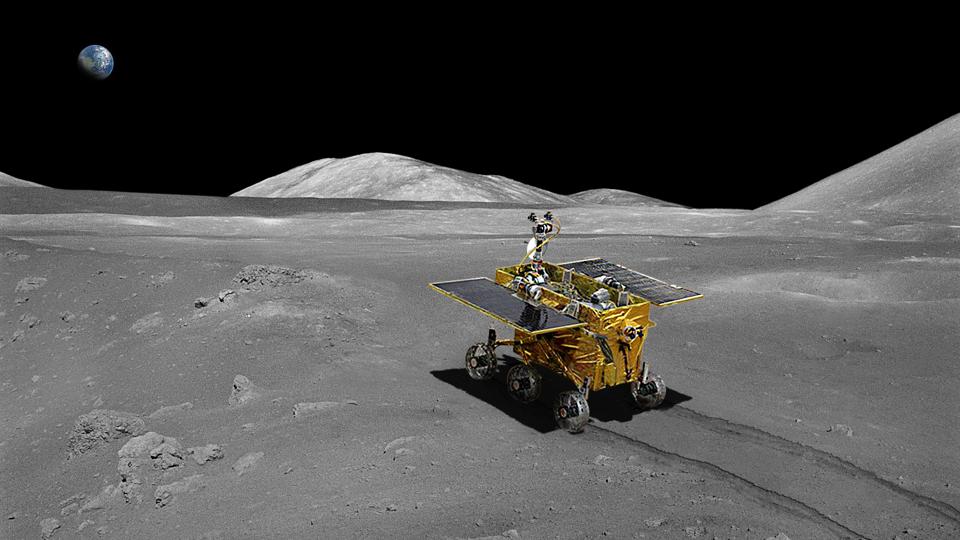 Delayed ever since the failure of the last Long March 5 rocket, Chang’e 5 will likely launch from Wenchang during 2020. It will attempt to return samples of lunar rock from the moon. If it makes it, Chang’e 5 would be the first lunar sample return mission since 1976. “If the launch of the Long March 5 is successful then that clears the way for Chang’e 5, which should have flown this past autumn,” says Harvey. “As well as being too big for the rockets used on Chang’e 4, Chang’e 5 needs a small rocket on the top to bring it back to Earth.” 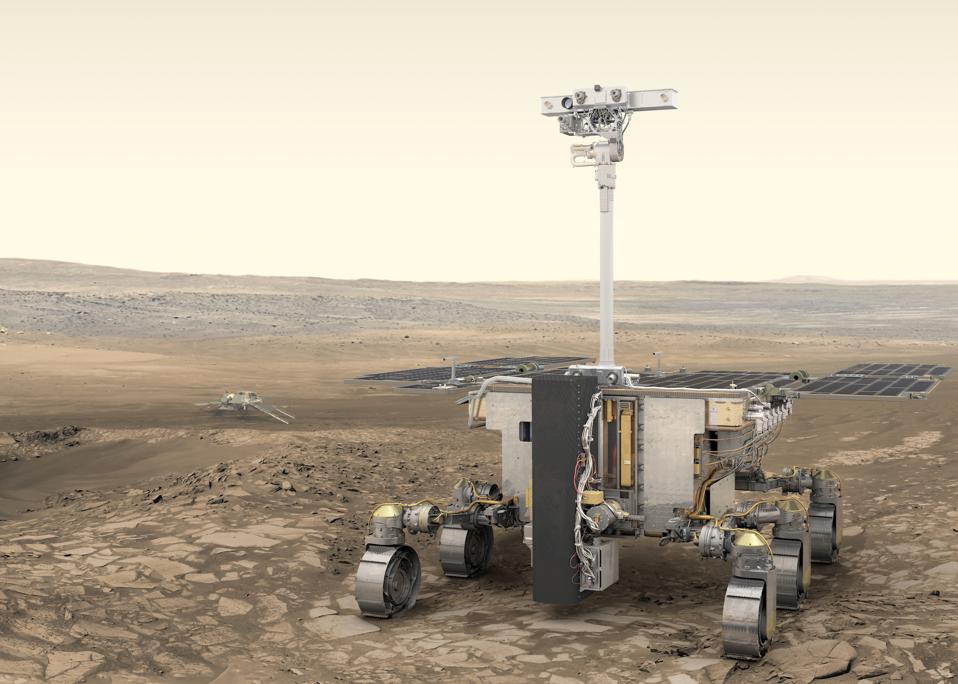 This is the most exciting and critical mission that requires a working Long March 5 rocket—and quickly. Huoxing (“Mars”) is China’s first Mars orbiter, lander and rover, and the success of Long March 5 is absolutely mission-critical. “It’s a big, ambitious, flagship mission for China, but it has to fly in July 2020,” says Harvey. Tests have already been completed. “The window is only about a month due to orbital mechanics, and if China misses that window then it will have to wait for another 25 months,” says Harvey. NASA’s Mars 2020 and the ESA’s ExoMars will also head for Mars next summer. “China’s space station and Chang’e 5 can wait a bit, up to a point, but not Huoxing,” says Harvey.

“It’s critical for China to have a heavy-lift launcher like the Long March 5.”

Rocket-wise, next for China after the Long March 7 will come Long March 9, whose rocket engines will—China hopes—allow crewed missions to the moon and a space mission like NASA’s Voyager.