Home Technology How Virtual Travel Could Help With Overtourism
Technology

The idea of travel without consequence, restriction or even leaving the confines of one’s own home has been both the defining arc for many a sci-fi tale, and also the basis for the burgeoning field of live virtual travel (one estimate by research firm MarketandMarkets puts the virtual reality market at $44.7 billion USD by 2024).

Although simulations have previously appeared in hotel and airline walk throughs, increasing sophistication in gaming and other related areas have brought us ever more realistic versions of actual tourist destinations, such as Everest, Alcatraz and even outer space. Now, the ability to livestream travel experiences in real time via drone, satellite and other technology is coming, and it could have unexpected effects on a travel industry that is currently experiencing its own disruption. These advances may usher in the rise of a new form of travel — one that separates the physical element from the experience, much like the trend already occurring in the food sphere. As the “eyes eat first” ethos pervades the virtual world of instagrammable plates and aspirational (or otherwise) food television and youtube influencers, the disconnect between the dining room and the diner is simultaneously shrunk and widened immeasurably. 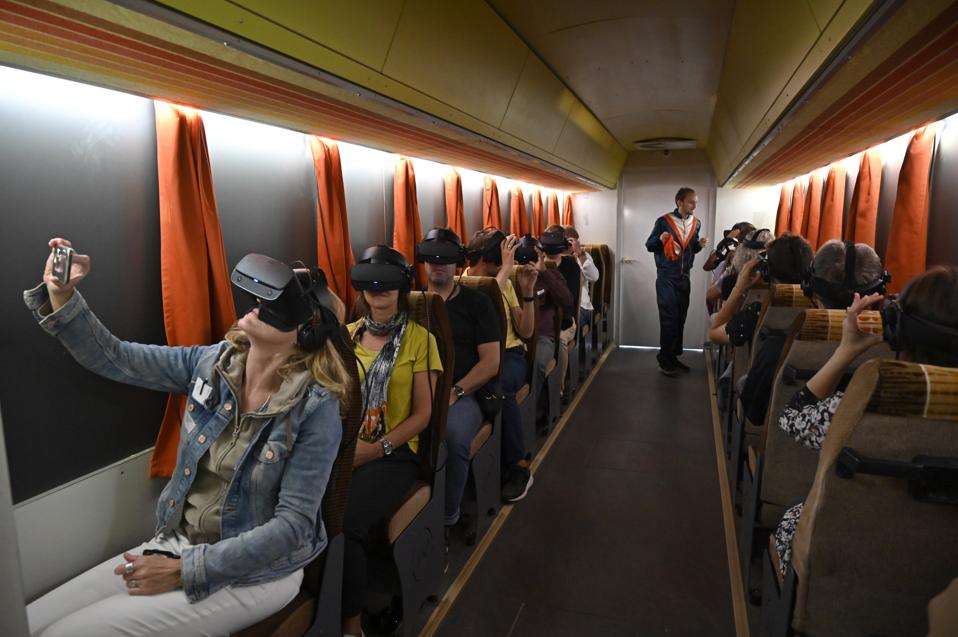 In some cases, this separation may be a good thing — especially when it comes to illustrious destinations such as Venice that are literally sinking under the weight of unsustainable levels of tourism and the resulting environmental impact. Although these cities — ill equipped to deal with the hoards of tourists depleting resources and not always spending at local businesses— are trying to limit the effects by restricting visitors to certain areas, only time will tell as to whether it will be successful. In these situations, would a virtual tour (especially to those merely interested in checking a box off of a travel to do list) be a complete loss?

Another element to consider is that a virtual experience would allow those (fool)hardy souls viewing a world heritage site as a backdrop for an elaborate (and in some cases, downright lethal) selfie to do so without risking themselves or others.

One could argue that this fake it until you make it mindset when it comes to travel self portraits is already pervasive, whether using DIY materials such as toilet seats and coffee mugs to approximate airplane windows, or professional backdrops emulating luxury plane seats and other situations.

At the heart of the matter of virtual travel lies the question of how these technologies are redefining our ideas of travel: i.e. how much of our enjoyment and understanding of a place derives from the tactility of being in the location itself. After all, aspirational media extolling the virtues of unique destinations has been a part of culture since humans could record what they saw in a transmittable form, whether by cave painting, parchment or cellphone. There’s certainly a debate to be had about whether it is a trifle elitist to restrict the experience of travel to those who have the means to do so. And although the terroir and soul of a place that may be hard to convey via pixels, we’re seeing the travel industry seek to reduce its carbon footprint and question sustainability in tourism practices.

Perhaps, as technology develops and destinations seek to contain the impact of the madding crowds, the clearest thing that virtual travel will show us is that travel can leave a mark on the destination as well as the visitor.

Netflix Is Making A Witcher Movie, Too, Called...