How Will Underfunded Illinois Public Pensions Fare In The Coronavirus/Market Crash Aftermath? 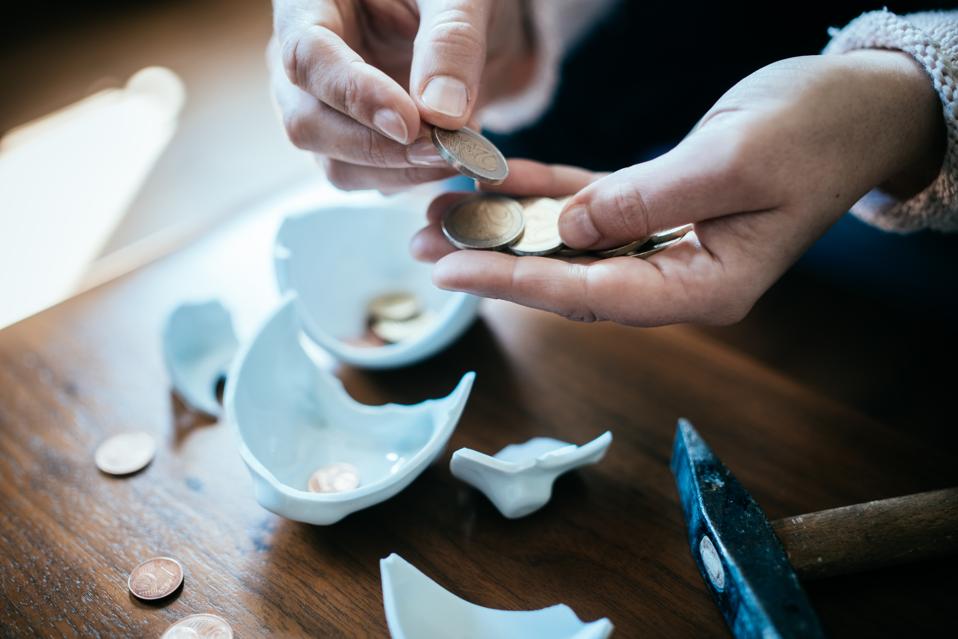 Yes, I know, I am just as keen to write about other topics than the public pension funding woes, as readers are to read about them, but I nonetheless find myself revisiting an article I wrote back in January, “Six Key Charts That Prove Why There Is No Alternative To Pension Reform In Illinois.” In that article, I shared the results of my calculations demonstrating that the projections of 90% funding in 2045 were shaky, and that only small differences in modeling assumptions would have a dramatic effect on this objective. At the time, I put together several scenarios that seemed moderate to me, using the data in the Teachers’ Retirement System actuarial valuation: assuming that assets only return 6% rather than 7% over time, assuming that assets return 6.5% but in recognition of this the valuation interest rate is likewise changed, and assuming there’s a 33% asset crash before resuming the same 7% asset growth/liability discounting — all possibilities that seemed reasonably likely.

What I did not do was model a worst-case scenario, that is, combining the two. In light of the dramatic market drops in the past several days, I’ve updated my calculations in the following four charts, which add a further scenario, that of an immediate 33% asset crash followed by an asset return/liability discounting of 6.5% rather than resuming a 7% assumption.

And readers of that prior article will recall there were two ways of calculating these outcomes: first, using the contributions already scheduled to achieve the 90% 2045 funding level; and, second, an alternate contributions that would be sufficient to reach a 70% funding level, based on some statements that Gov. Pritzker has made that suggest he’s considering an existing proposal to scale back the funding target (again, the context is in the original article).

First, with contributions corresponding to a 90% funded status target, and a 33% asset crash and ongoing 6.5% discount rate, the funded status never manages to improve beyond the upper 20%s. 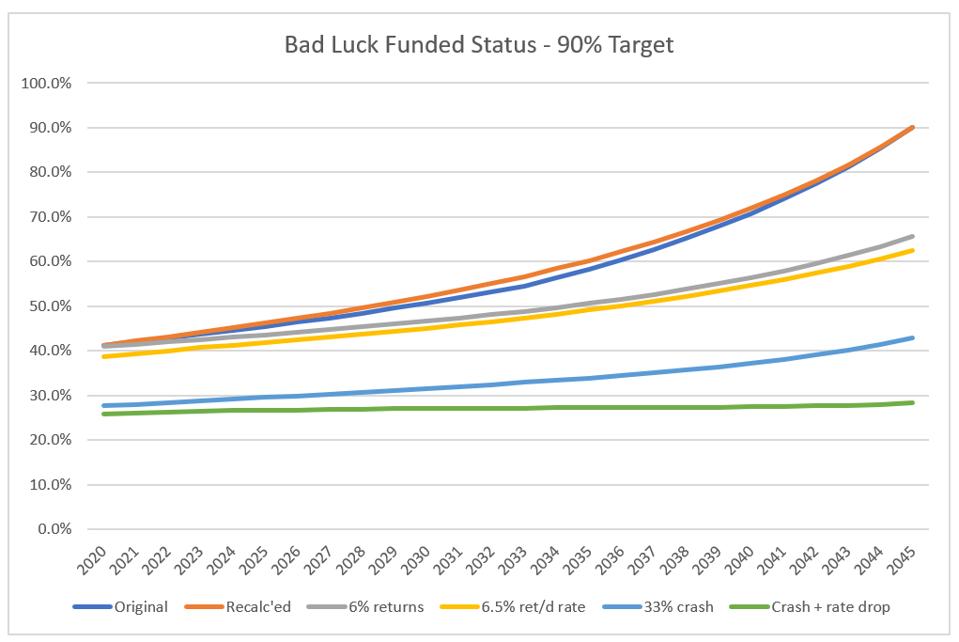 Second, with contributions corresponding a 70% funded status target, the actual funded status persistently declines to not much more than 10%. 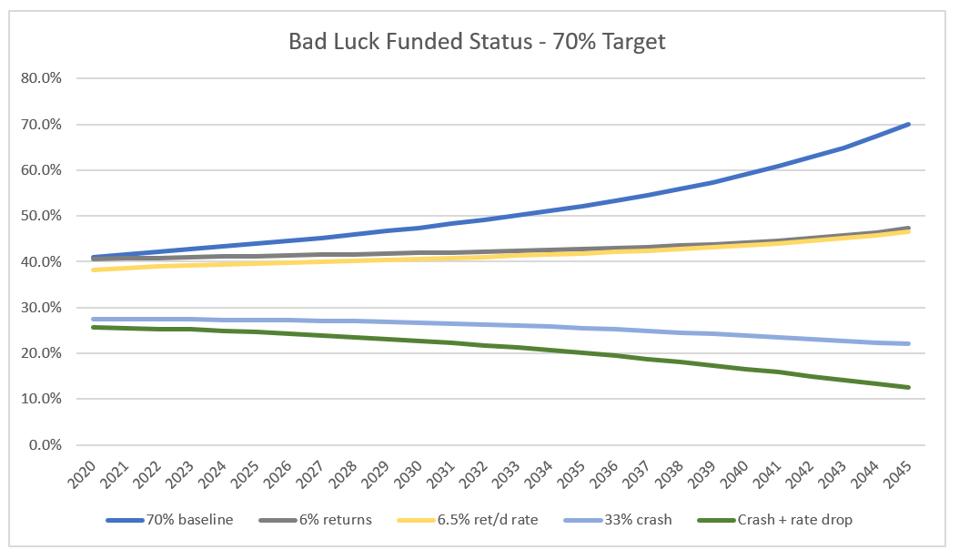 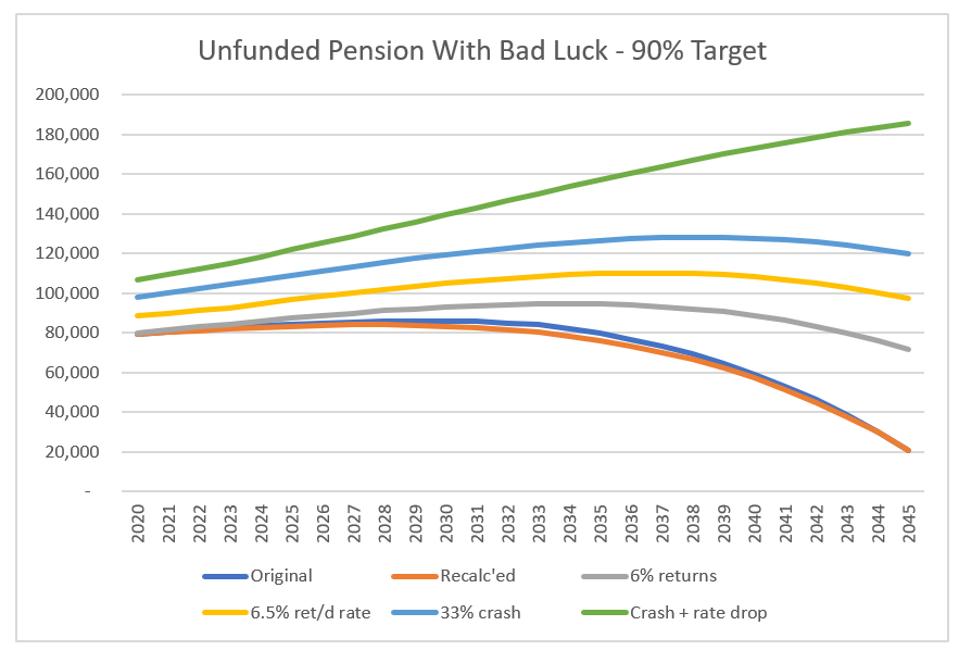 And, not surprisingly, the numbers are even worse if following contributions based on a 70% target. 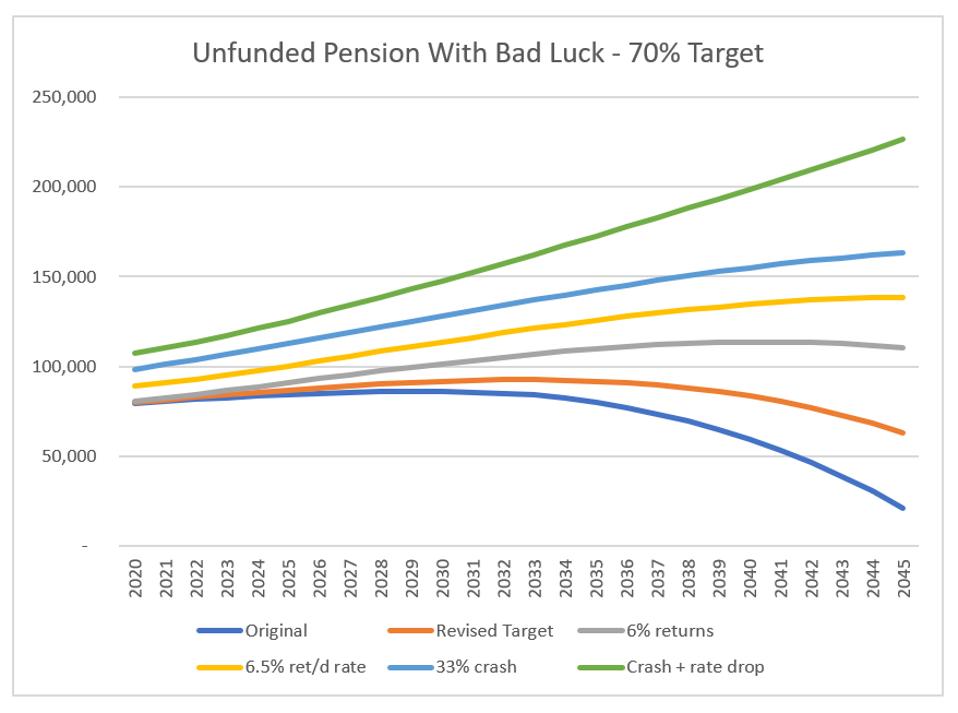 Now, the good news, if you can call it that, is that the public comments of the folks at the TRS system claim that they are well-insulated from these risks. The folks at Capital Fax.com cite Dave Urbanek of TRS:

“We started 2020 with $54 billion in assets – which is a record high for TRS. And for the last several years, the Board of Trustees and the investment staff have structured the portfolio in a ‘defensive posture’ because of our low funded status.

“We have recognized that any severe economic downturn could be bad for us – we have no ‘reserves’ to fall back on. So when deciding how to invest assets, we’ve regularly performed ‘stress tests’ on the portfolio – ‘what will things look like if X happens’ – to help us form the defensive posture. The over-arching goal has been to preserve assets and lower risk as much as possible while making as much money as we can. For instance, we only have 36 percent of the portfolio in stocks, both in the U.S. and internationally. We have 27 percent in bonds, 15 percent in real estate, 11 percent in private equity and about 10 percent in hedge funds and other ‘diversifying strategies.’”

Has the system truly managed to invest in such a manner as to protect them from market crashes? That seems too good to be true. It’s simply a given that diversifying investments to provide such protection inevitably comes at the cost of lower returns than otherwise, and, in fact, in 2018, Crain’s Chicago Business reproted that the opposite was true:

“Illinois Teachers’ Retirement System, the state’s biggest pension fund, is relying heavily on risky, expensive investments as it tries to claw its way out of a quicksand of unfunded pension liabilities.

“The pension fund, which has only enough money to cover 40 percent of its future obligatons, has steadily increased allocations to private-equity funds and only recently reversed course on investing with hedge funds despite lackluster results for both.”

And all of this neglects the further likelihood that in the case of a serious recession, even the existing contribution schedule would be thrown out the window.

Finally, for avoidance of doubt, I do not find any pleasure in some prospect that these grim numbers might force the state to face the reality of its pension underfunding. Rather, it angers me to see the outcome of a longstanding failure to fund, as if we would forever be protected from unforeseeable rainy days rather than anticipating them.

How To Watch Or Live Stream UFC Fight Night 170