Breaking
How The US Department Of Health & Human...
Why Do Chinese Companies List Their Shares In...
Can You Get Covid-19 Coronavirus From Food? Frozen...
Winklevoss Twins Tell Bar Stool’s Dave Portnoy To...
Berkshire Hathaway Doubles Down On Net Lease REIT,...
70% Of Americans: Ban Foreign Apps
This Week In Credit Card News: Pandemic Brings...
Three ‘Big Impact’ Surprises That Could Slam Stocks,...
Quantum Computing: What Does It Mean For AI...
5 Questions With Jonathan ‘Magar’ Martinez Cannabis Curing...
5 Concise Questions With Jonathan “Magar” Martinez Cannabis...
Lessons From The Frontlines: Preparing A Global Vaccine...
Behind The Curtain—Chapter 11 From The Inside—Chapter 4—First...
What To Look For In A Nursing Home...
Apple’s Radical iPhone 12 Upgrade Suddenly Confirmed
5 TikTok Growth Hacks You Need To Know
Home Technology HP Inc. Goes More Vertical With New Education Chromebooks At BETT 2020
Technology

HP Inc. is a company that’s been synonymous with PCs for many years now, and one of the ways it maintains its edge is with its rapid release cadence, willingness to take some innovation risks, and a focus on the channel. With CES 2020 barely in the rear view (see my coverage of the company’s announcements from the conference here), HP Inc. announced another slew of PCs at BETT 2020.

For years now, HP Inc. has gotten more precise in meeting end users and IT needs. This is to be expected in maturing market to maintain and in some cases, raise profits. This targeting of specific verticals is exemplified in its efforts in retail and healthcare. Now, with this newly announced group of PCs, HP is expanding much more aggressively into education. This is more than just slapping Chrome OS on the computers, cutting prices and calling it a day. Let’s take a closer look at the new products and the forces driving the push.

Challenges in education and the classroom of the future

When you think of computers in classrooms, it’s easy to imagine some of the challenges. Middle schools are said to be the most difficult on devices—computers getting knocked off desks, getting flung around in backpacks, drinks getting spilled on them, etc. I remember my son when he was in middle school beating the heck out his classroom PC. Furthermore, in this day and age, when many educational resources have gone digital and mobile, so any sort of technology-caused downtime can be a real headache for both teachers and students. Classroom computers must be sturdy, reliable, and portable, to meet the changing landscape of teaching and learning. Enter the newly announced HP Inc. Chromebooks, designed to satisfy many of these check boxes.

Chromebooks have been a hit in the classroom, with reportedly over 30 million students and teachers utilizing them worldwide. Out of the multiple different Chromebook vendors, HP boasts the number one position. HP says all of the new Education Edition Chromebooks feature full-skirted keys to improve durability and water-resistance. Additionally, HP says they feature large bumpers and improved reinforced corners, enabling them to survive a tumble off the school desk or a pull on the power cord. Furthermore, HP touts the new devices’ long battery life and their inclusion of HP Classroom Manager software, which educations can utilize to manage student interactions.

Of these new Chromebooks HP announced, specifically geared towards education, the Chromebook 11 G8 EE and the Chromebook 11A G8 EE represent the two cheapest options (the 11 is now available starting at $259, with the 11A coming in February). With a z-height of 18.85 mm, they are incredibly slim—I believe, the thinnest 11” Chromebooks geared towards learning. As for as compute performance goes, the Chromebook 11s come with a choice of the latest Intel Celeron processor, or the AMD A4 or A6 processors. This doesn’t represent the highest or even mid-range performance levels from AMD or Intel, but it hits a price point. In the realm of connectivity, they feature Intel and Qualcomm’s 2X2 AC WLAN and HP Extended Range Wireless LAN. I’m glad HP didn’t skimp on the wireless and kudos for the WLAN. The Intel edition’s battery purportedly lasts up to 13.5 hours, while the AMD version maxes out at 10 hours. Both battery lives should be sufficient to last throughout the average school day—a crucial consideration. The laptops both fold out flat to 180 degrees, and even come with an optional HD IPS anti-glare touchscreen.

Did I mention that these devices are rugged? HP tests durability by putting them through a 76cm drop test onto a concrete surface, and a 122cm drop test on wood. They also must pass MIL-STD 810G testing and HP’s own Total Test Process. Additionally, the Chromebook 11s can purportedly survive a spill of up to 350ml of water. All in all, HP says these computers undergo approximately 120,000 hours worth of rigorous testing. These Chromebooks also be easily cleaned with regular household cleaning wipes, over and over again—if you think about it, this is a really great attribute that could help cut down on the transference of germs and spread of illness in schools. 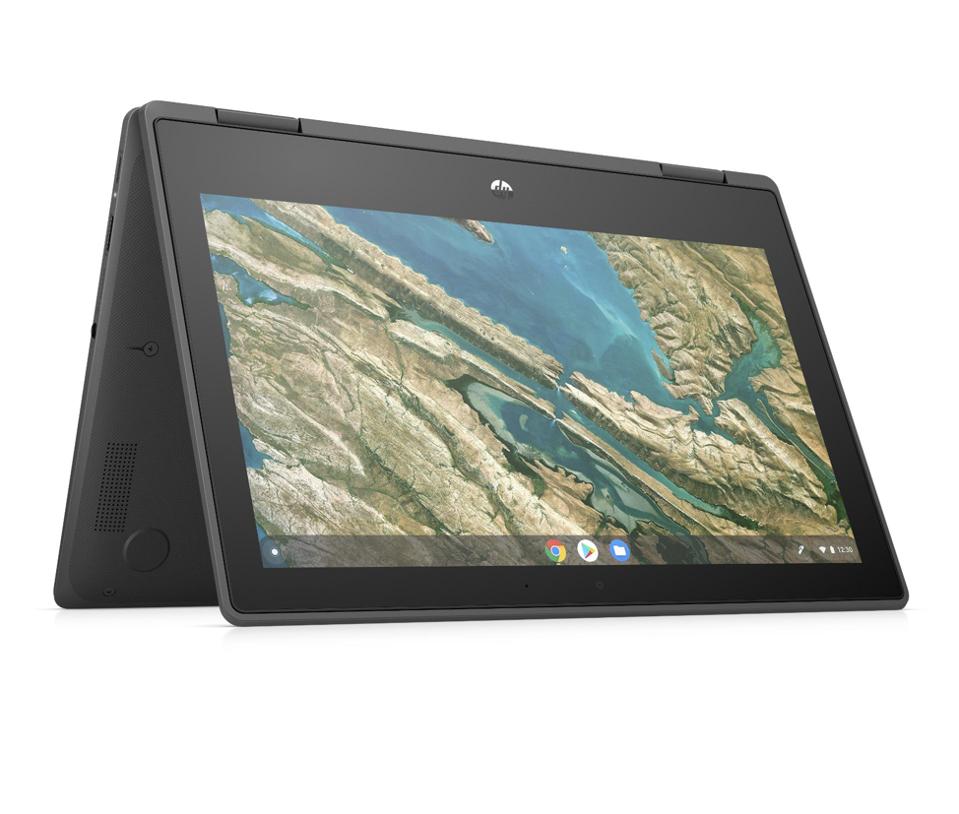 Moving on to the Chromebook x360 11 G3 EE. This powerful device features the latest Intel Celeron processors and a 360-degree hinge that allows it to toggle between four different user modes: stand and tent (ideal for making presentations, watching videos, or video chatting), tablet (for note-taking, reading) and notebook (for classic content creation, editing, typing, etc.). HP also touts the device’s dual cameras—a user facing camera and a 5MP 2nd world-facing camera. In the realm of durability, it features a Corning Gorilla Glass 3 scratch-resistant touchscreen, and is made from textured material that HP says will make it easier to grip (and less easy to drop). Schools can even opt for an active HP Wacom EMR pen, to further aid in creative applications.

Perhaps the greatest thing about this device is that its four different user modes make it highly adaptable—it can accommodate a wide range of students’ learning styles and abilities. 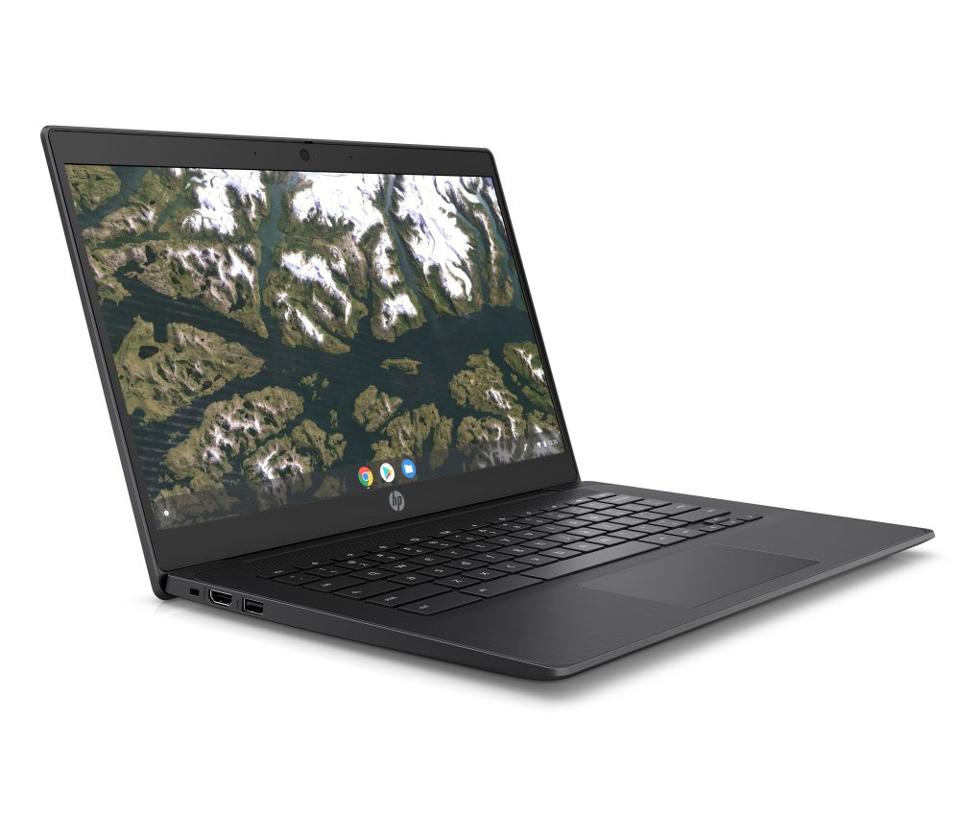 Lastly, let’s take a look at the Chromebook 14 G6. The major selling point on this Chromebook is obviously the large 14” screen, which HP says will enable teachers and students alike to be more productive. Like the Chromebook 11s, it also features the latest Intel Celeron processors. It also comes with up to 8GB of memory and 128GB of storage. Additionally, it includes 2×2 WLAN and an Extended Wide Range Antenna for speedy data transfer. HP says its 720p Wide-angle HD webcam, along with its dual stereo speakers, make the Chromebook 14 ideal for the recording of videos, collaboration, and live broadcasting. HP also future-proofed the device somewhat with USB-C and HDMI ports.

Like the other devices, the Chromebook 14 is built and tested for its durability, including a 70cm drop test on concrete, HP’s Total Test Process, and 13 different items of MIL-STD810G testing. Its corners and USB-CTM ports are also reinforced to protect the device in the event of a fall. It looks to be a strong offering that will appeal to those who desire the extra screen real estate.

Like I said, HP’s targeting of the education market goes far beyond just slapping Chrome OS on devices and slashing their prices. Amongst other things, these new devices look to be rugged enough to withstand heavy classroom use, powerful enough to drive productivity and versatile enough to accommodate many different learning styles and applications. Keep in mind, these platforms won’t run any Windows apps, but these are just the sort of devices I envision in the Google Chrome-focused, web-based classroom.

Disclosure: Moor Insights & Strategy, like all research and analyst firms, provides or has provided paid research, analysis, advising, or consulting to many high-tech companies in the industry, including HP Inc., which may be cited in this article. The author holds no investment positions in any of the companies cited.