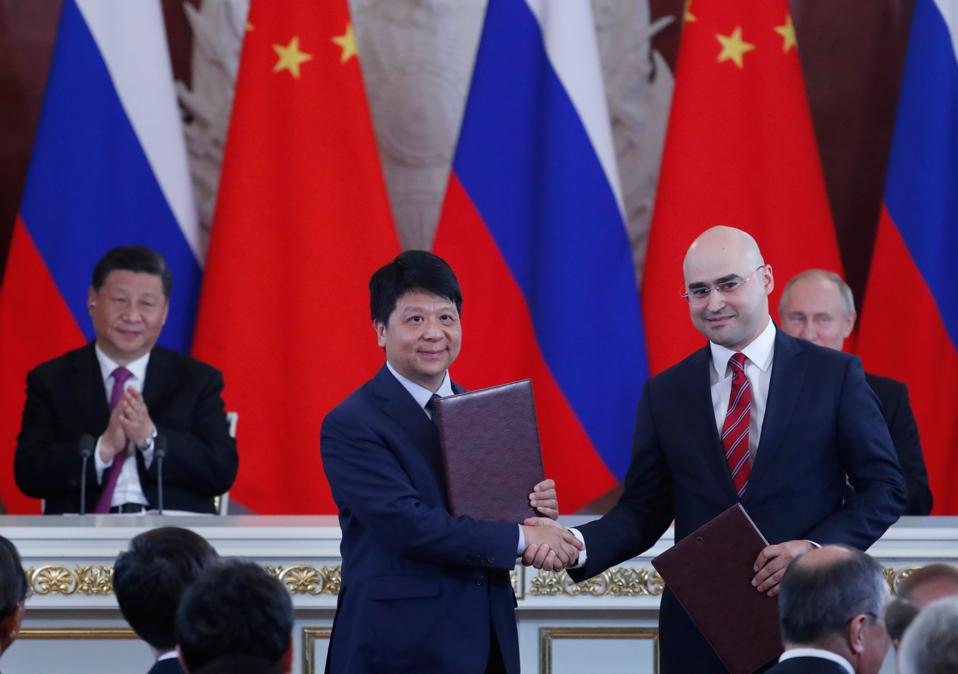 Any thought that the U.K. decision to snub President Trump’s threats and allow Huawei into its 5G network might draw a line under the intensifying rhetoric has fallen away. Despite muted public language after the U.K. announcement, we now know that Trump vented “apoplectic fury” at Boris Johnson over the phone, using such livid terms that U.K. officials “were taken aback by the force of the language.”

Just ahead of that U.K. decision, the transatlantic warnings had reached something of a fever pitch and even included some politicians and officials comparing a decision to buy from Huawei as akin to buying technology from the KGB during the Cold War.

But Huawei and Russia are more modern-day security issue than clever comparison to times gone by. The company finds itself playing a link role between Moscow and Beijing. China and Russia are not obvious bedfellows, but the new technological Cold War has pushed them closer. And they bring different skills to the table, along with a relentless push against American influence around the world.

Some of this has been more perception than realpolitik—Huawei securing 5G pilots in Russia and shipping ever more smartphones to the country, Putin adopting elements of China’s “Great Firewall,” the sovereign internet law, a clampdown on social media platforms, internet blockages, even mandated software standards.

More worryingly, we also have the quiet progress of an anti-U.S. AI alliance between China and Russia, with Huawei in the middle. Huawei has co-opted Russia tech and engaged in state-level discussions on hardware and software development. The company is recruiting heavily in the country. As the Nikkei Asian Review reported this week, this Russo-Chinese partnership, “with Huawei playing a starring role, could undermine American technological dominance.”

Huawei is now building an “AI ecosystem” in Russia, just let the implications of that sink in for a moment. “Huawei aims to work with industry organizations and engage over 100,000 AI developers, more than 100 software vendors and 20 universities to build an AI ecosystem within five years,” one of the Chinese giant’s execs explained.

And while AI gets the headlines, there is also a recruitment exercise to pull in some very specific security skills from the Russian market. A Chinese company hiring Russian offensive cyber experts should give pause for thought.

You will hear a lot more about Huawei’s growing influence in Russia over the coming months. It has proven a fertile hunting ground for the company to supplement its technical capabilities back home, accessing this new engineering talent pool. Different styles, different skillsets. And some of the skills being searched for raise further questions—as these job ads clearly illustrate. 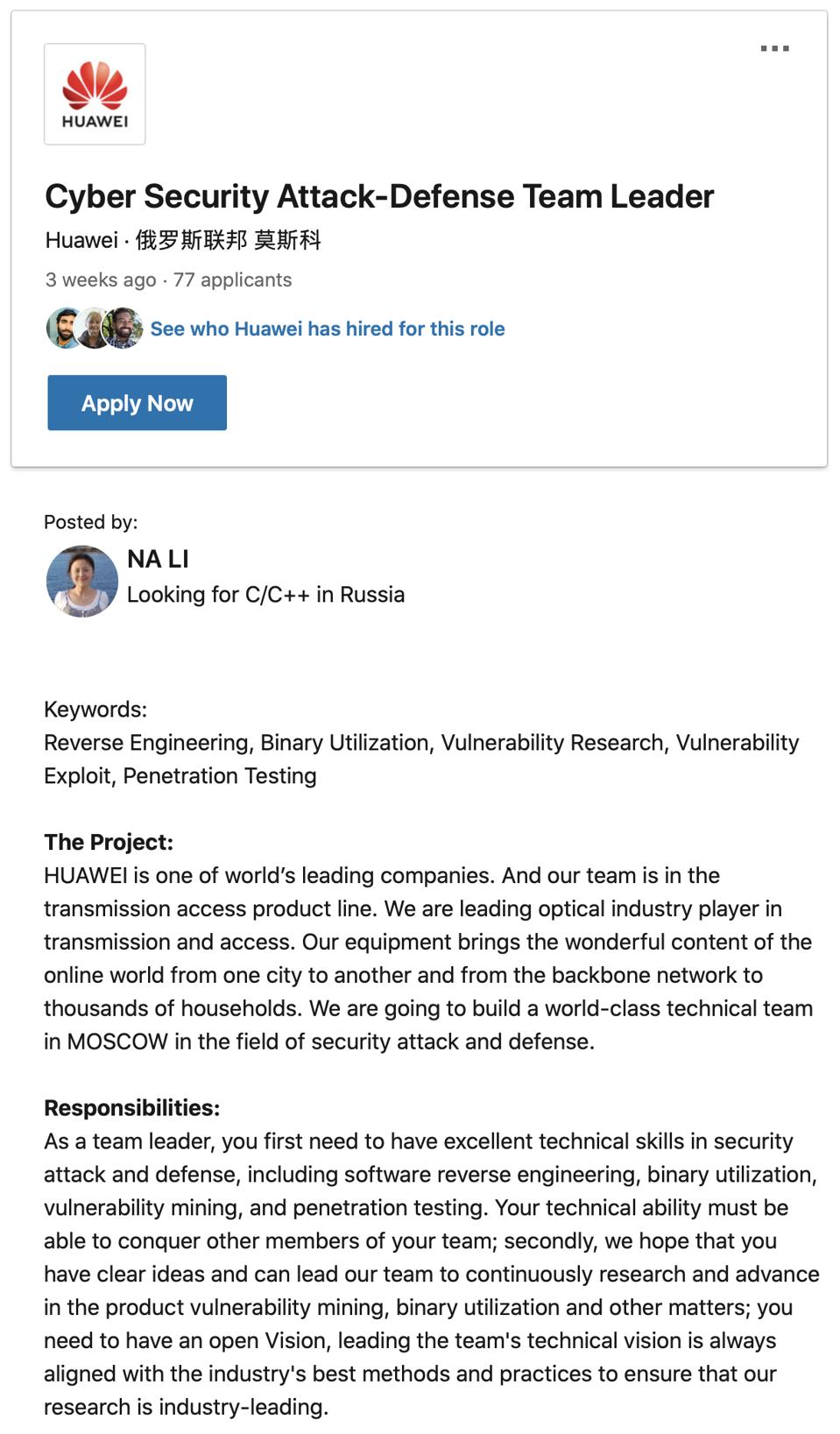 For the U.S., these are the shifting sands that cause such angst at the decision taken by the U.K. and others to put caution to one side and follow a commercial line. With every contract win, R&D dollars and extended influence flow east.

Prior to the U.K. decision, the immediate threat had been over intelligence sharing and security collaboration. With the decision taken, attempts were made by officials on both sides to calm nerves. But on the commercial front, an imminently Brexiting Britain needs a U.S. trade deal more than it needs U.S. sigint. And that may not be such smooth running. Vice President Mike Pence told CNBC that the U.S. is “profoundly disappointed,” answering is this a deal-breaker with a simple “we’ll see.”

The fight is not won yet. Senior U.K. politicians on the government’s side of the house have formed a lobbying group to seek to overturn or at least cut down the decision that has been taken. The group is seeking to limit players on the U.S. stage to those from countries with fair market competition and substantive human rights laws, as well as non-adversarial government agencies. Huawei would not pass the test.

And then we have U.S. Attorney General William Barr, telling the Department of Justice’s China Initiative Conference on February 6 that “China’s current technological thrusts pose an unprecedented challenge to the U.S.,” with China now “the United States’ top geopolitical adversary,” and the need to ‘blunt Huawei’s drive to domination,” given its potential to enable China to “shut countries off from technology and equipment upon which their consumers and industry depend.”

Huawei’s relentless market drive is so severe, Barr warned, that “the power the U.S. has today to use economic sanctions would pale by comparison to the unprecedented economic leverage we would be surrendering into the hands of China.”

This mix of political, security and commercial imperatives is unprecedented. We have speculation that the U.S. might invest in Huawei competitors, Nokia and Ericsson, to level the 5G playing field. We have Huawei leading its Chinese telco stalemates in crafting an alternative to the U.S. based Google Play Store and its ability to control global standards. We have Huawei suing Verizon for patent infringement, described by the U.S. carrier as “a sneak attack on our company and our nation.”

Much of the Huawei debate misses the point. This isn’t about sensitive intelligence, it’s about mundane infrastructure. And that was reflected in Barr’s comments. If you believe in the combined forces of 5G, IoT and AI then the nation that controls the innovative evolution of that backbone wields huge influence. And it also carries the threat of the big red button that might switch it all off.

If Huawei does want to maintain its PR offensive against the U.S., then the Chinese company allying itself with Washington’s other most dangerous nation state adversary would seem a poor path to tread. And it will become increasingly difficult for the U.K. and other western nations to select its technology if it is being seen to be taking such an eastern approach to the development of those systems. This is the dangerous game.

I’ve said before, we’re somewhat inured to buying critical equipment from Huawei because we are so used to buying much of our technology from China, and that if there was a Russian 5G champion we would never countenance buying its equipment. Huawei may now be looking to put that theory to the test.