In a recent virtual conversation with film historian Annette Insdorf, Hugh Jackman discussed everything from his childhood experiences with theater and film to his upcoming starring role in the Broadway musical, Music Man. 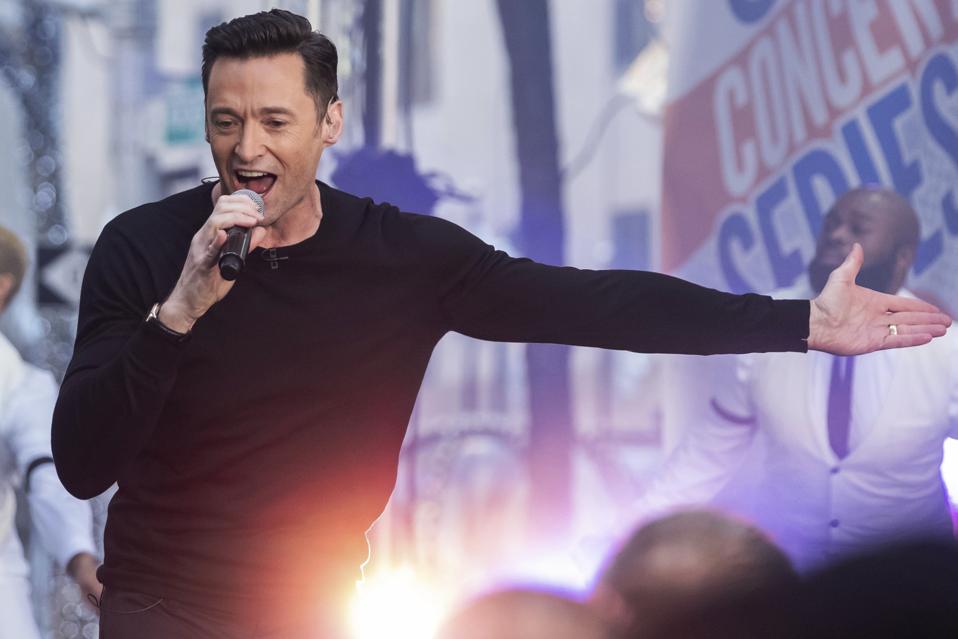 Actor and singer Hugh Jackman performs on NBC’s “Today” show at Rockefeller Plaza on Tuesday, Dec. … [+] 4, 2018, in New York. Jackman is coming back to Broadway as a classic roguish traveling salesman. Producer Scott Rudin said Wednesday, March 13, 2019, that the two-time Tony-winner will star in a revival of “The Music Man” starting in September 2020. (Photo by Charles Sykes/Invision/AP, File)

Asked which roles he had learned the most from, he pointed to The Boy from Oz on stage and the film of Les Miserables. He said both roles showed him “why I got into acting in the first place, to understand human nature, why we’re here.”

The first film he remembers, he said, was Raiders of the Lost Ark.

Films that struck him as he got older, he added, featured “great dramatic performances. These included Kramer vs. Kramer, The Deer Hunter, Dog Day Afternoon. When he saw ET he saw his father cry, showing him the power of a film that he thought was meant for him, “how it touched my father.”

Noting that if he is a movie star, he’s a “reluctant one,” Jackman said one of his heroes “acting-wise” was Paul Newman. “Noone had more movie star mega-wattage, but if you look at the parts he played they were just great character pieces,” he explained.

He also said he “absolutely loved” Burt Lancaster. “For me, he was always surprising, bold in his choices. Some of his drunk acting was the best I’ve ever seen.”

Jackman also said the physicality of his movie characters is ‘something I’ve always taken very seriously. Coming from the theater world, you understand that your physicality is as important as your voice. Often in film there’s such an emphasis on your eyes, your face, what’s going on in your mind, sometimes the physicality can be just a little bland. With every character, I create something.”

Discussing his starring role in the film, Bad Education, about a Long Island school superintendent involved in an embezzlement scheme, recently shown on HBO, Jackman said he loved its story, “what it had to say. It is more of a cautionary tale, a chance to understand how things came about. He was a fantastic educator who somehow lost his way. How that happens was fascinating to me.”

Jackman said the upcoming revival of The Music Man, which also will star Sutton Foster, will “happen when Broadway is safe and ready. I do not know when that is.”

He said he sings the musical’s score daily, has singing lessons every week and Zoom meetings with the musical’s choreographer and music director. “I’m not a spring chicken. I can’t afford to sit on my couch and in a few months turn it on,” he added.

The conversation was part of 92Y’s ongoing “Reel Pieces” series. It can be viewed through June 30.

A Fast-Growing Site Taps An Urgent Need In The Pandemic: Helping Seniors Cross The Digital Divide

Why You Should Ask for Introductions, Not Referrals

How To Make Cybersecurity More Approachable