Breaking
‘Moriarty The Patriot’ Makes A Hero Of Holme’s...
The WFH Revolution: How Covid-19 Is Changing The...
eToro Announces Staking For Cardano And Tron
Fintech Startups: Plan For Your Customers’ Emotional Realities
The End Of Third-Party Data — Finally
The Scientologist Billionaire Trying To Make A New...
Mission-Driven Fintech Kontist Shakes Up The Future Of...
What Can The Simple Fact That ‘We Exist’...
Stock Market: Here Comes October With Scary Tricks...
Farmers, College Students, And Food Banks Across The...
Thinking Of Writing A Book To Grow Your...
Microsoft Security Report Highlights New Sophisticated Threats From...
3 Steps To Help You Build Entrepreneurial Confidence
SMB Fintech Darling Kabbage To Be Acquired By...
Silicon Valley’s Next Target: The One-Person Business
The Small Business Code Of Ethics
Home Business Hulu’s ‘Solar Opposites’ Is Eclipsed By Its Brilliant Side Story
Business

Hulu’s ‘Solar Opposites’ Is Eclipsed By Its Brilliant Side Story 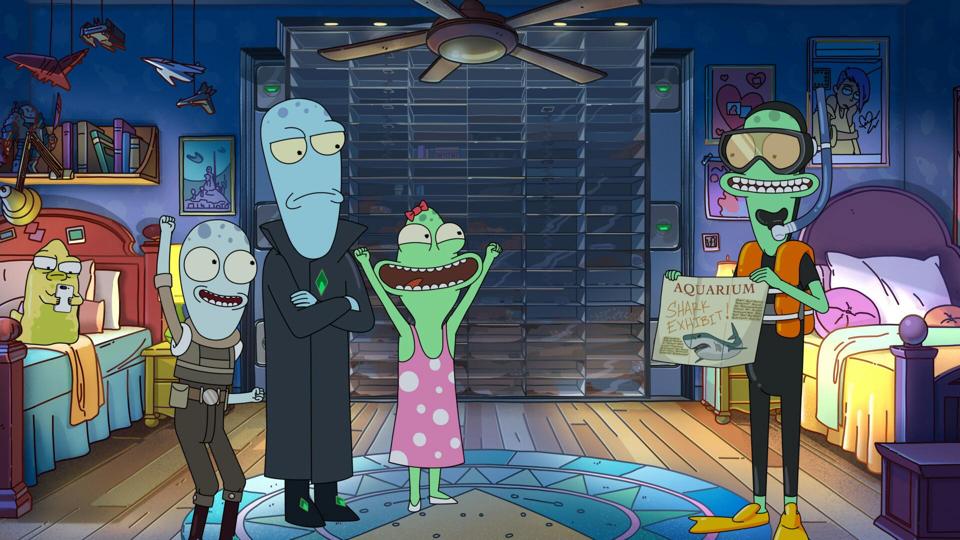 There’s a lot of story potential in that background.

For the first couple of episodes, Solar Opposites feels almost like Rick and Morty-lite, featuring the voice talents and unhinged imagination of co-creator Justin Roiland, even utilizing the same animation style.

Solar Opposites boasts the off-the-wall insanity of Rick and Morty, without the clever meta-commentary, or the fantastic dynamic between the titular pair. But once the show starts getting into its groove, it develops its own distinctive personality, best described as a blend between Bob’s Burgers and Invader Zim.

Most of the comedy relies on sex, violence, pop culture references, and the fish-out-of-water concept, but the most intriguing parts of the show tend to involve Yumyulack and Jesse, best friends and bitter enemies, constantly struggling to fit in at school, completely lacking in empathy for their human companions.

A silly side-story involving these two and their compulsive habit of shrinking random people who annoy them, before placing them inside a display case, starts to build into a serialized narrative, as their human collection grows in size and scale.

“The Wall” is initially a dog-eat-dog wasteland, as the inhabitants struggle to survive their new environment. But the Wall quickly develops into a society, the layers of the display case inevitably forming a brutal hierarchy, where the inhabitants of the top shelf live like kings, leaving the bottom layers as a poverty-stricken slum.

It’s an on-the-nose class commentary, like Final Fantasy VII’s Midgar, or Netflix’s The Platform, simmering in the background of the show’s absurd alien misadventures.

The Wall might be nothing more than a silly side-plot, poking fun at overused tropes from fictional dystopias, but the story is surprisingly compelling; there’s something about the sheer absurdity of the situation, the random cruelty of their confinement, that makes these tiny humans incredibly sympathetic.

The idea of universes existing inside larger universes often comes up in Rick and Morty, emphasizing their hopeless insignificance on the grand scale of things, but also drawing attention to the fact that the size and scale doesn’t really matter. Drama is still drama, even if it’s occurring inside a car battery, or a simulation nested within a simulation.

The structure of this unbalanced society stems from the shape of the display case, built for the amusement of two sadistic kids who barely look at it. Nobody “deserves” to be imprisoned inside the Wall – it’s all just a random, twisted joke, and that underlying tragedy never stops being hilarious. The heroic protagonist was just some guy in a red shirt who happened to catch the eye of Yumyulack, and eventually found himself leading an armed revolution against a dictator.

Amusingly enough, the story even contains insightful commentary about the never-ending abuse of power, how a well-intentioned revolution can become a victim of its own success, taking the same shape as the old hierarchy, just with a different face at the top.

I’m looking forward to the next season of Solar Opposites mostly for this ridiculous power struggle – the fact that it’s all just a backdrop to the unhinged lives of the alien protagonists makes it all the more intriguing.

So You Finally Got Your PPP Money. Now What?

Money For Wildlife And Banking For Cannabis Companies: Here’s What Democrats Tacked Onto The Latest Stimulus Bill