In December of 2018, I pointed out key reasons as to why Microsoft would win the $10 billion JEDI cloud contract. Those high-conviction reasons were based on the key differences across cloud computing products.

At the time of the prediction, Oracle and IBM had petitioned that the bidding process was unfairly weighted towards Amazon, Microsoft did not have the appropriate security clearance for the bid, and Microsoft’s stock was tumbling from $115 to $94 during the Q4 2018 selloff. 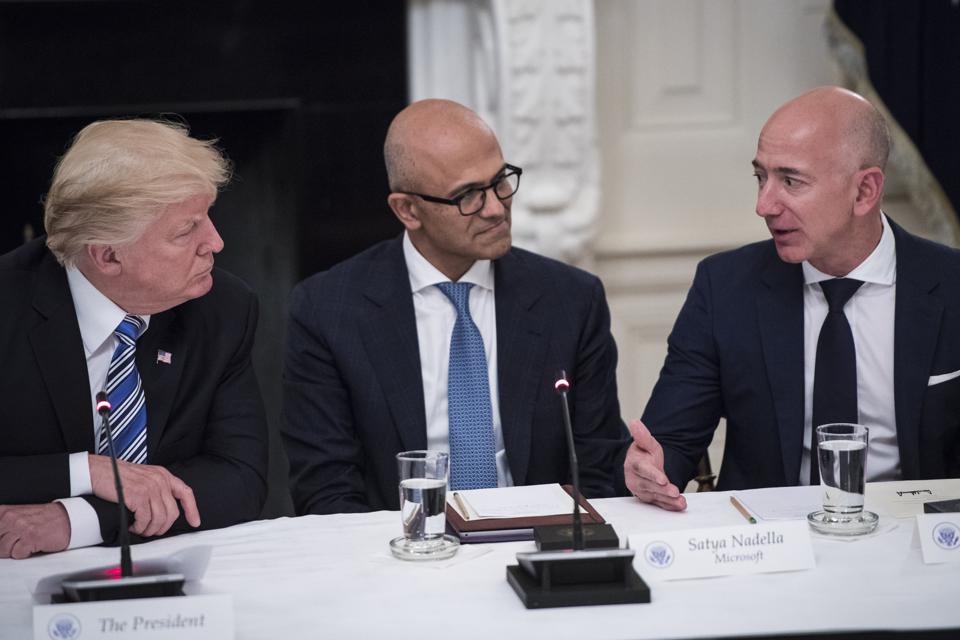 Pentagon Contract is about Hybrid Cloud Computing; Not Politics

The Pentagon’s Joint Enterprise Defense Initiative (JEDI) will cover 1,700 data centers and move 3.4 million end users and 4 million endpoint devices off private servers and onto the cloud. The contract is worth $10 billion allocated over the next ten years to a single cloud vendor.

Last week, Amazon filed to overturn the $10 billion cloud computing contract that the Pentagon awarded to Microsoft in October. Amazon is blaming “improper pressure” from Donald Trump and stating it lost the deal due to Trump’s “personal vendetta against Mr. Bezos, Amazon and the Washington Post.” Amazon is arguing that the decision should be revisited because of “substantial and pervasive errors” and Trump’s interference.

The JEDI contract does not add substantially to any company’s market share at about $1 billion per year, guaranteed for two years with the option to renew the contract. Rather, Amazon is likely upset by the validation that Microsoft may offer the better security for classified initiatives. The total cloud IaaS market is worth $73 billion and will reach $166 billion annually by 2024.

Amazon has been adamant that the company is the leader in cloud computing with 48% market share compared to Microsoft’s 15.5 percent share. Industry analysts such as Gartner has named AWS the leader in cloud IaaS for the ninth year in a row based on the “ability to execute and completeness of vision.”

Oddly absent from the broad claim that Amazon is the leader in cloud computing is a deeper comparison between the two products, as both AWS and Azure have their strengths and weaknesses. Cloud infrastructure has become a more nuanced category over the past nine years with various infrastructure environments, such as public cloud, private cloud, and multi-cloud.

The environments offered by Amazon don’t solve chief concerns that enterprise-level companies have with cloud IaaS, which is sharing data with a vendor, known as data residency, plus other security implications that come with storing data on another company’s servers. The solution for these concerns, of retaining workloads on-premise while also leveraging the cloud, is called hybrid cloud computing. Microsoft was the pioneer and currently leads in this category.

In January of 2016, when Amazon was enjoying its enormous lead in the cloud IaaS market, Microsoft set out to solve the issue of how to allow sensitive data to remain on-premise while also leveraging the cloud. Azure Stack was launched in 2017 when Microsoft owned a mere 8% of the market. 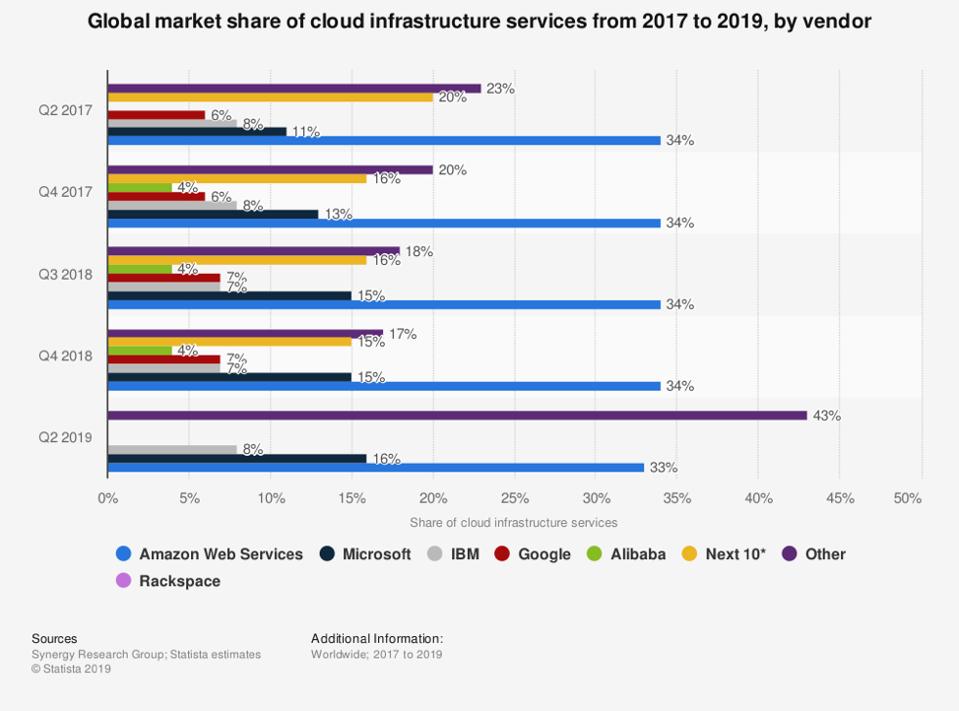 Meanwhile, Amazon continued to serve the markets that were throwing billions of dollars into adopting public and private clouds, such as Netflix, Twitch, LinkedIN, Facebook, ESPN, BBC, and Twitter.

Notably, with e-commerce roots, Amazon has little experience with commercializing on-premise server hardware or software, whereas Microsoft has deep roots with on-premise enterprise software. It doesn’t take much imagination to understand why Microsoft would want to accommodate on-premise needs for enterprises, as they have been doing for nearly thirty years.

From 2017 to 2019, there has been a rise in popularity for Microsoft’s hybrid approach. According to a recent survey, hybrid is now the preferred approach for 58 percent of enterprise-level respondents. In addition, 95 percent of the Fortune 500 use Microsoft’s Azure. These companies include Chevron, J.B. Hunt, Intercontinental Hotel Groups and KPMG.

Amazon did not publicly compete in hybrid cloud computing until this month, when Outposts was launched, nearly two months after the DoD announced their decision. Outposts was first discussed at the re:invent conference in November of 2018, when the Pentagon contract bid was well underway, but has not been open to the public until now (December 2019). This would have required the government to be one of the first hybrid customers for a company that has little on-premise experience.

Notably, running VMWare Cloud on AWS was negated in the bidding process when the DoD announced the contract would be awarded to a single vendor. VMware went on to protest this decision.

Although there has been no official announcement from the DoD that the department is choosing a hybrid strategy, it would be hard to imagine the Pentagon storing all of its highly classified data on outside, third-party servers.

The Department of Defense had already stated that “managing security and data within clouds … requires manual configuration that is prone to human error or resource limitation and therefore introduces potential security vulnerabilities,” which was the impetus for requiring a single vendor.

Today, 30% of enterprises allocate IT budgets for cloud IaaS, while 70% (the bulk of enterprises), prefer to keep data on-premise with servers they own. This is despite the many benefits to cloud computing, including virtualization and vastly increased speed of provisioning servers, real-time data processing and benefits of multi-cloud workloads.

Most of the adoption for cloud IaaS has been driven by companies that have fewer security concerns relative to the benefits of cloud. This is an incredibly important distinction to understand. Amazon has benefited handsomely from serving customers who underweight on-premise when comparing cloud strategies.

Statistics today prove that Amazon continues to lead in public and private cloud IaaS. Meanwhile, Microsoft chose to serve an entirely different market, one that prioritizes security, and it was an educated guess when I predicted the Pentagon contract would be in the camp.

Since I made this prediction based on tech product differentiation and competitive positioning, Microsoft has gained 49.79% and Amazon has gained 17.85%. 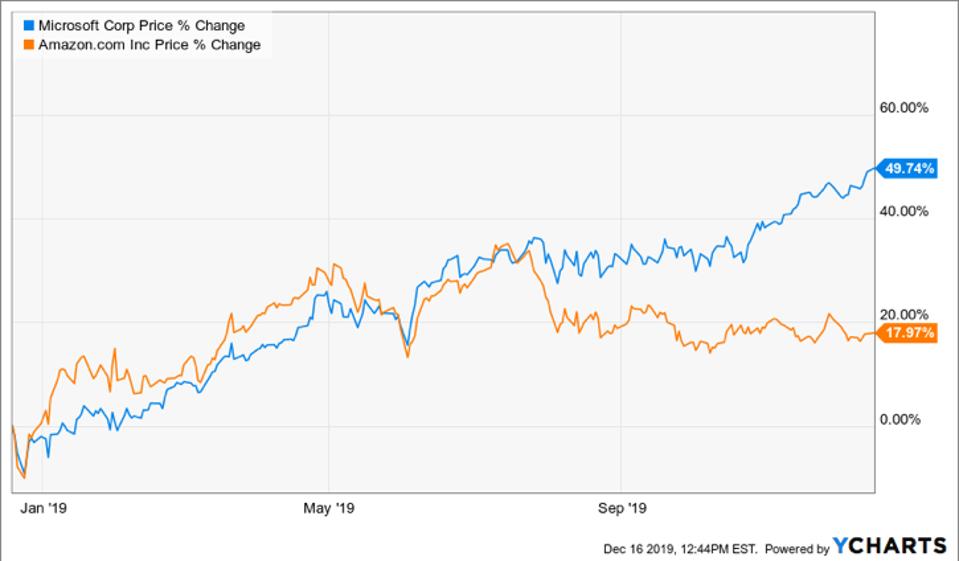 Admittedly, the nuances between tech products can be harder to ascertain as noise from wall street reels, public relations firms, and celebrity CEOs are frankly more exciting than technical specifications.

To expect the Pentagon to adopt an off-premise cloud strategy, when the majority of enterprises will not do so due to data residency and security implications, is an oversight.

Meanwhile, the lawsuit will continue to take up the courts’ time, will use taxpayer dollars for the Pentagon’s defense team, and will likely end in a nice paycheck for Former Defense Secretary James Mattis, who is writing a book about the ordeal.

Poor Communication Is Still The Primary Contributor To Project Failure

Aging Parents And The Gift Of Safety

Christmas Day Eclipse: How To Watch The ‘Ring...