Amazon.com and Microsoft reported spectacular profits in January, boosted by continued growth in their public cloud businesses. Now IBM wants to play more in the cloud, too. 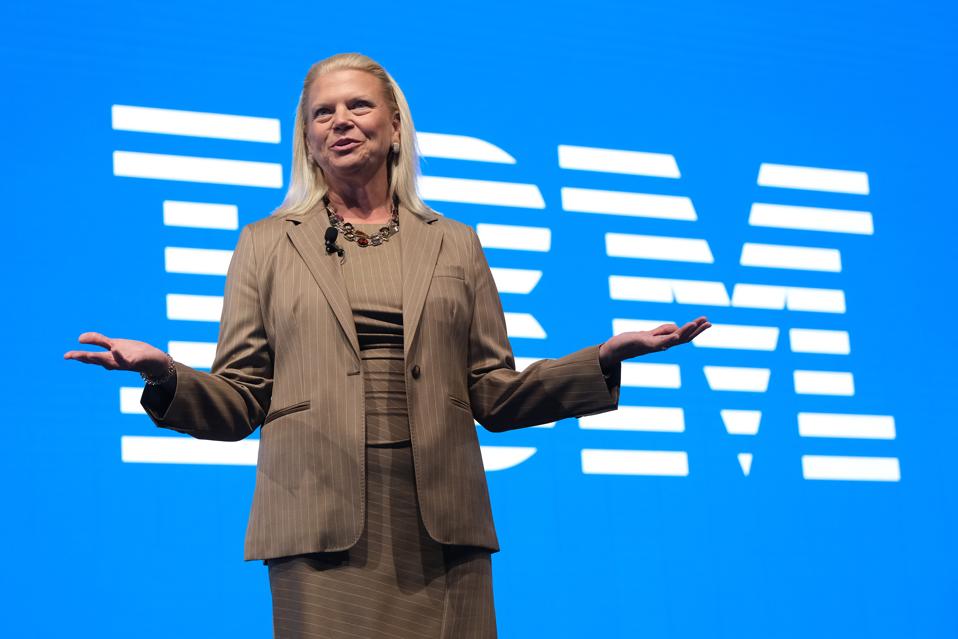 FRANKFURT AM MAIN, GERMANY – SEPTEMBER 11: Ginni Rometty, CEO of IBM, speaks during the press days … [+] at the 2019 IAA Frankfurt Auto Show on September 11, 2019 in Frankfurt am Main, Germany. The IAA will be open to the public from September 12 through 22. (Photo by Sean Gallup/Getty Images)

Investors cheered the change, but they’re likely to be disappointed. That’s because no matter who is in charge, IBM lacks the scale to compete. Let me explain.

IBM is suffering from its past sins. The company earned the nickname Big Blue for its early dominance in mainframe computers. As that era faded, IBM transitioned to selling best-in-class data center equipment to large enterprises.

Rometty was supposed to be the savior. She took over the top job at IBM in 2011 and immediately began to restructure the key businesses.

Unfortunately, AWS and Azure were investing much more, and in ultimately wiser ways.

According to a Seattle Times report, AWS spent $12.5 billion on infrastructure in 2014, a seven-fold increase from 2010. At Microsoft, capital leases and equipment for its Azure data centers swelled to $5.6 billion. Analysts also noted that much of its $12 billion research and development budget was devoted to the cloud to extend the network globally.

Through the first three quarters of 2019, AWS and Azure dominated the public cloud, with market shares of 39% and 19%, respectively, according research notes published at Statista. IBM was a distant sixth, at only 3% share.

Not only did IBM wait too long to invest in public cloud infrastructure, but it also failed to invest enough to ensure IBM would have scale or best-in-class enterprise products.

In the public cloud, IBM is neither big, nor it is blue. That’s a killer because big and better matters.

AWS, the market leader, reported in January that sales surged 34%. Microsoft doesn’t breakout Azure numbers, but most analysts believe it had $4 billion in sales last quarter, an increase of 62%.

By contrast, IBM cloud and cognitive sales rose only 9%.

Today, the public cloud is mainstream, notes Gartner, an information technology research firm. Corporate clients are eager to leverage their digital businesses globally. This requires massive infrastructure that traditional data centers, like the ones pushed by IBM, simply can’t provide.

Only a few cloud infrastructure firms had the foresight to make these investments early. IBM was not one of those companies. Now the one-time tech giant is paying the price. It’s a big miss.

Gartner analysts predict public cloud revenues will reach $266 billion in 2020, an increase of 17% year-over-year. By 2022, spending for cloud services should hit $354.6 billion.

Pulling for the underdog is a natural human sentiment. Now that the Rometty era at IBM is over, investors want to believe a fresh start will do the company good. It doesn’t hurt that there is some symmetry with Microsoft, currently the fastest growing cloud company.

Like Microsoft CEO Satya Nadella, Arvind Krishna was promoted from his position as leader of the cloud division. Sadly, the similarities end there.

Nadella inherited a business in 2014 that had already moved all-in on the cloud. Steve Ballmer, the former chief executive, may have missed the potential of the iPhone. But he bet early and aggressively on the cloud.

He famously told University of Washington computer science and engineering students in 2010, that he was literally betting the company on Azure. Even then, Ballmer recognized that scale was the key to winning.

IBM’s competitors trade at a premium because they are growing faster and more predictably. That trend is likely to continue.

Investors who own IBM shares should use further strength to reduce their positions.