Breaking
‘Game & Watch: The Legend Of Zelda’ Will...
How to Get Results from Broken Link Building
Florida Supreme Court Tells The American Bar Association...
How to Write Perfect Paid Social Media Marketing...
How Restaurants Can Design a More Sustainable Food...
Expenses That Small Business Owners Need to Be...
How You Can Make Saying Goodbye To The...
Biden To Meet Royal Family At Cornwall’s Eden...
It’s Going To Be Emotional — Going International...
Peer Mentoring For Students: STEM & Buds
7 PR Trends in 2021: The Story So...
Google Plans Radical New Google Pixel Smartphone Upgrade
Where Did COVID Come From?
Ride To Growth With A Business Vehicle
C3.ai’s Tom Siebel: How To Scale AI
Moz Acquired by iContact Marketing Corp
Home Technology If Betelgeuse Does Go Supernova Do You Know Where To Look? Here’s How To Prepare For The Big Moment
Technology

If Betelgeuse Does Go Supernova Do You Know Where To Look? Here’s How To Prepare For The Big Moment 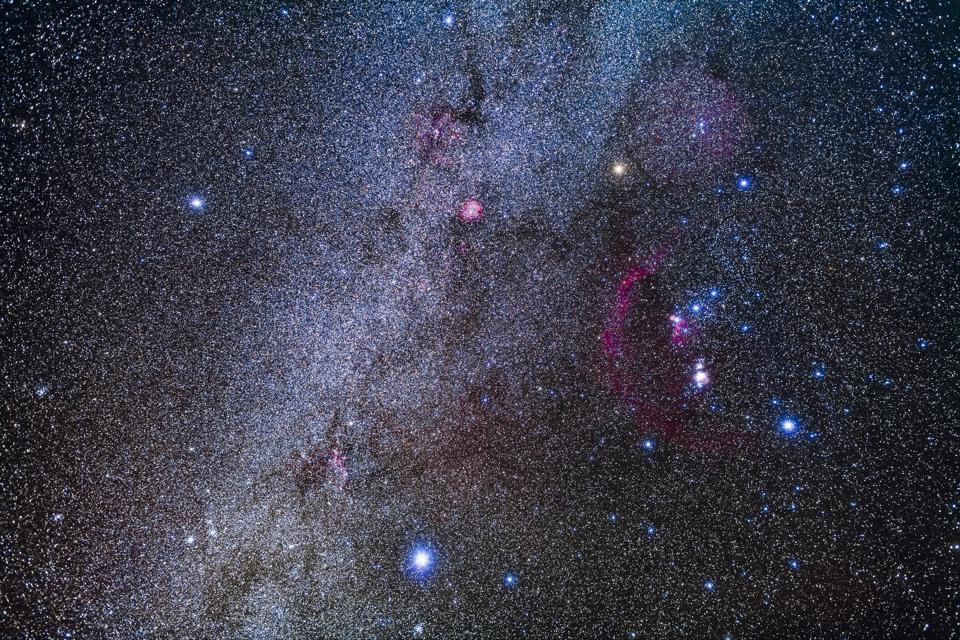 The constellation of Orion the Hunter, at right, and his two Hunting Dogs and their brightest stars: … [+] Procyon in Canis Minor at left and Sirius in Canis Major at bottom. (Photo by: VW Pics/Universal Images Group via Getty Images)

It could happen tonight. Or it could happen in 100,000 years. One day, the orangey-red supergiant star Betelgeuse at the armpit of Orion, the Hunter—about 650 light years from Earth—will explode as a spectacular supernova. It would be the celestial sight of the Millennium, with the ruddy star becoming roughly as bright as the full moon for a few weeks or months (here’s a more detailed take on what it will look like).

Recently, the star has visibly dimmed. That’s lead to speculation that it’s going through changes … and could explode.

The truth is, no-one knows, though Betelgeuse is known to vary in brightness because its atmosphere sheds a lot of dust. It’s probably nothing, but … what if? Of course, Betelgeuse is at such a distance that it may have already happened; as it is 642 light years from us, it could have exploded 642 years ago.

Either way, it’s best to play it safe and learn exactly where Betelgeuse is in the night sky just in case it does go supernova. It’s also a welcome chance to get acquainted with arguably the most beautiful constellation in the entire night sky—Orion, the Hunter—home of Betelgeuse, and much more besides.

So … first things first. How do you pronounce Betelgeuse? Some say “beetlejuice”, others “bet-all-gerz.” 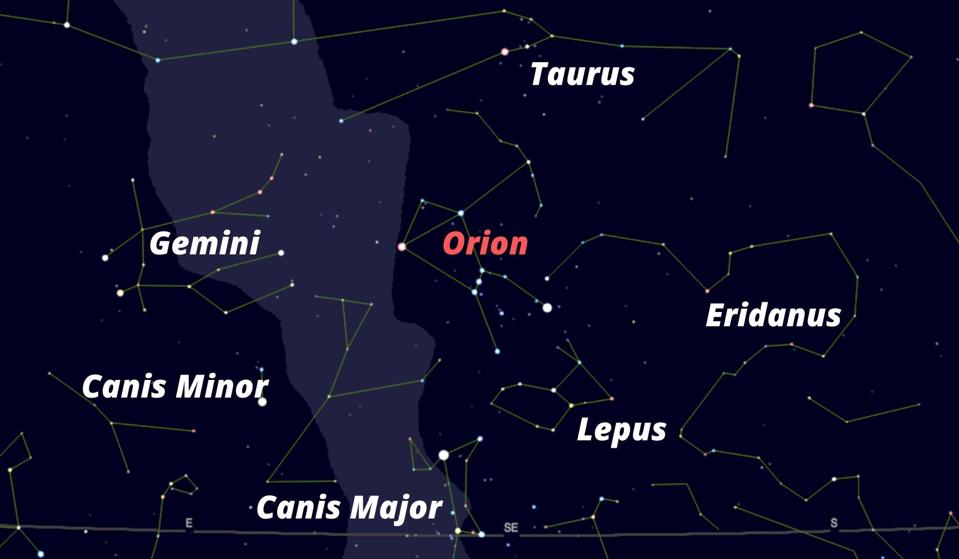 How to find the constellation of Orion.

How to find the constellation of Orion

At this time of year, in January and February, finding Orion is easy. It’s the brightest, most arresting constellation of all in the northern hemisphere’s winter sky, and it’s high in the southeast night sky after dark. The easiest way to find Orion is, of course, to identify the three bright stars in Orion’s Belt—Alnitak, Alnilam and Mintaka—but it’s also useful to know that at this time of year it’s to the right of the two brightest stars of Gemini—Castor and Pollux—below another red suppliant star, Aldebaran in Taurus, and above Sirius, the brightest star in the night sky.

In fact, those “Belt stars” lined-up point straight down at Sirius. 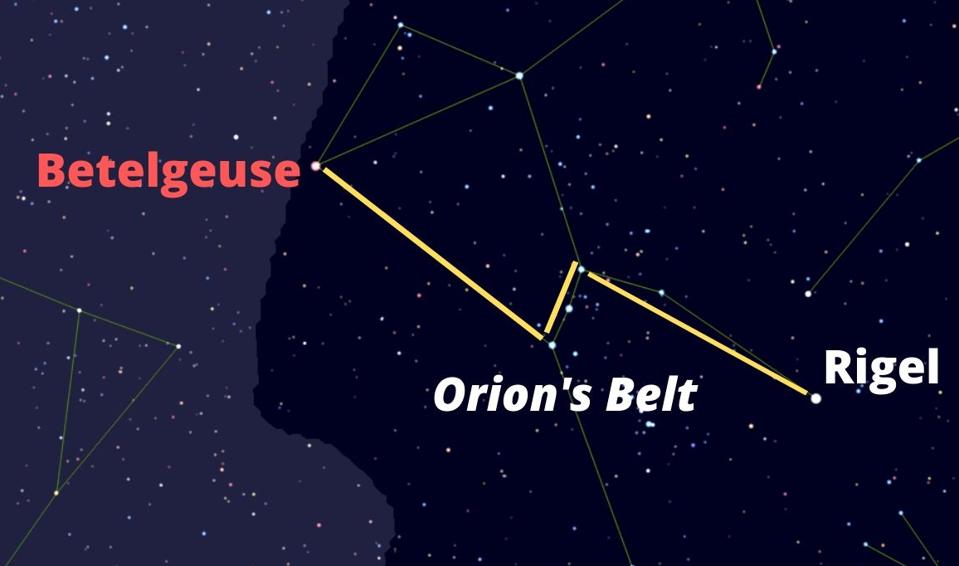 How to find Betelgeuse

Orion’s giant orange star Betelgeuse—the ninth-brightest and one of the largest known stars in the night sky—is at the left shoulder of Orion. You can find it by getting to know all the stars in the Orion, or by locating Orion’s Belt, which will be almost vertical in the night sky as its gets dark. To its right is Rigel, and to its left is Betelgeuse. Before you decide that it’s just a star like any other, allow your eyes to glance at it, and scan quickly across it. You’ll notice that it has an orangey color.

Other bright stars and sights in Orion

Although Betelgeuse is the most famous, it’s only one of Orion’s four bright corner stars. Here are some fast facts about them: 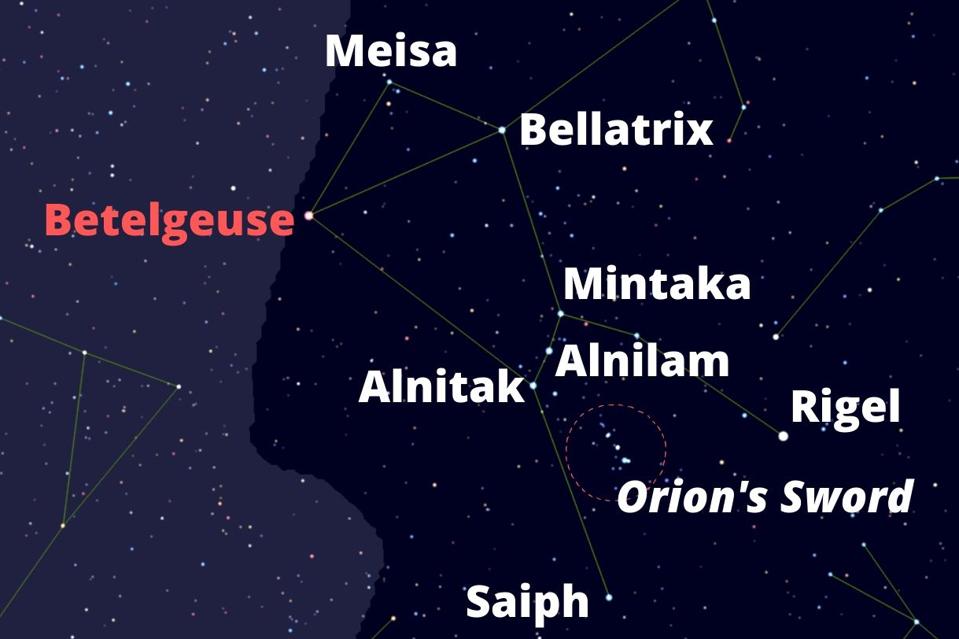 The constituent stars of Orion.

Why we might all miss Betelgeuse even if it goes supernova

Neutrino detectors will go crazy if Betelgeuse goes supernova, but will we all see it? That depends on when it occurs because Orion is a seasonal constellation. It’s most easily visible to everyone on the planet from December through May. If Betelgeuse goes supernova during the northern hemisphere’s winter months (the southern hemispheres summer months), then great—we’ll all see it shine super-brightly at night. We might have to get up early, or stay out late, to see it at other times of the year, but if the super-rare event occurs in June, July or August when the sun appears to shine from close to Orion, then it won’t be much of a spectacle at all.

How to find the “winter triangle”

How to find the ‘Winter Triangle’

Betelgeuse is one of three stars in an asterism known as the “Winter Triangle.” The other two are Procyon in Canis Minor and Sirius in Canis Major. It’s almost an exact equilateral triangle. First find Sirius, then go up to Betelgeuse, then range left and down to make an equilateral triangle with Procyon (pronounced pro-see-on).

With so many ways to find Betelgeuse, you should now be ready if it suddenly goes supernova. Let’s just hope that, if it does happens, it does so between December and May … and while the human race still exists.