If Coronavirus Is Airborne, Beware Loud Talkers And ‘Superemitters’ 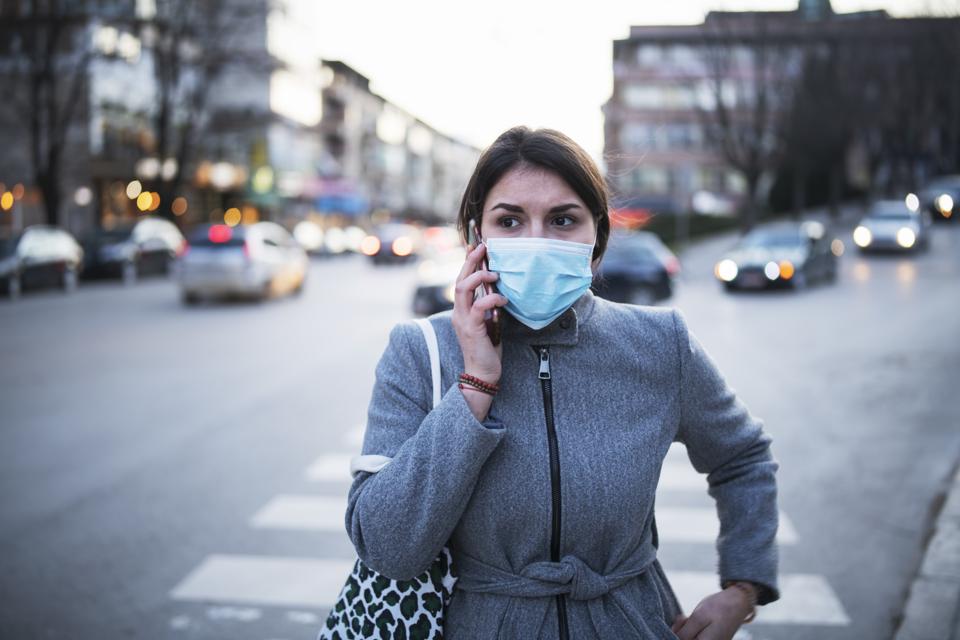 Woman with mask talking on the phone, she walking on crossroad in the city.

It’s not yet clear if the coronavirus that causes COVID-19 can be easily transmitted through the air, but more public health officials (and President Trump) are beginning to suggest taking precautions – like wearing cloth masks – just in case.

If a person can be infected simply by inhaling or coming in contact with aerosolized virus particles that can hang in the air for hours, it may be worth considering other precautions as well, like lowering our voices and avoiding long face-to-face conversations (for those that aren’t already).

“Given the clearly high transmissibility of COVID-19, a plausible and important hypothesis is that a face-to-face conversation with an asymptomatic infected individual, even if both individuals take care not to touch, might be adequate to transmit COVID-19,” reads a new editorial in Aerosol Science and Technology by researchers from UC-Davis and the Icahn School of Medicine at Mt. Sinai in New York. “Note that the key word in the last sentence was ‘might.’”

A growing body of science has shown that we expel more aerosolized particles when we talk than when we breathe, and talking louder can emit even more particles. In addition, scientists say some people – referred to as “superemitters” – expel up ten times more particles when they talk than others, for reasons that remain unclear.

“A ten-minute conversation with an infected, asymptomatic superemitter talking in a normal volume thus would yield an invisible “cloud” of approximately 6,000 aerosol particles that could potentially be inhaled by the susceptible conversational partner or others in close proximity,” the editorial reads.

To be clear, our best understanding right now is that the coronavirus SARS-CoV-2 is primarily transmitted via droplets that are expelled through coughs and sneezes. Such droplets don’t hang in the air like aerosols. But laboratory experiments have found that the virus can survive for up to three hours in aerosol form.

The lab environment may not reflect real life, however, leaving scientists and public health officials not all in agreement about the question of whether COVID-19 is airborne. The World Health Organization only recommends airborne precautions in certain medical environments, whereas the CDC is reportedly considering new sweeping recommendations that people wear masks on their faces to guard against possible airborne transmission.

While the science on how SARS-CoV-2, specifically, travels and potentially infects people via the air is still emerging, researchers have done a significant amount of work on how speech affects the volume of particles expelled.

“The existence of speech superemitters motivates consideration of a new hypothesis: that speech superemitters contribute to “superspreading” of infectious diseases transmitted by emitted airborne particles,” reads a 2019 Scientific Reports paper from the same team based at UC-Davis.

A follow-up study published in Plos One in January looked at particle emissions for different vowels, consonants and phrases, and found that some led to the projection of more particles than others.

Following the outbreak of the original SARS coronavirus in 2003, there was some speculation that the languages spoken may have played a role in the spread of the disease. While earlier research by the UC-Davis team finds no significant difference in particle emission based on language spoken, they write in Plos One that “it remains unknown if specific elements of speech, which may be more common in one language than another, are associated with increased particle emission.”

The researchers emphasize that more study is needed into the potential epidemiological implications that the new coronavirus could spread via speech, especially amplified talking.

“For example, an airborne infectious disease might spread more efficiently in a school cafeteria than a library, or in a noisy hospital waiting room than a quiet ward.”

To get a complete picture of how the virus is being transmitted, we need to learn more about how much of it is needed to start an infection and how it travels from one host to another.

“The aerosol science community needs to step up and tackle the current challenge presented by COVID-19,” the team concludes.

Fluke Or For Real? Jets Are Gambling On Breshad Perriman’s Strong 2019 Finish

The Coronavirus Was Detected In Sewage In March...