Breaking
Everything You Need to Know About Corporate Social...
Is Adaptive Leadership the Key to Motivating Employees?
Why business events are set to return with...
Business events set to return with a bang!
Expanding Internationally: 5 Things to Consider for eCommerce...
How the Machine Shop Is Going Digital in...
Sustainable Food Packaging Is Helping the Hospitality Sector...
Top 5 Investment Practices To Make More Money...
Managing IT Requirements for SMEs: 5 Aspects that...
How To Build a Successful Luxury Brand In...
Finding The Best Google AdWords Consultant for Your...
8 Top Tips To Help Your Agricultural Business...
Three Reasons Why Office Décor and Design Are...
Looking To Improve Efficiency In Your Business? Here’s...
AI and machine learning for business
How Social Media Changed the World
Home Business If Iranian Troops Really Thought Ukraine Flight 752 Was A Cruise Missile, They Made A ‘Hail Mary’ Shot
Business 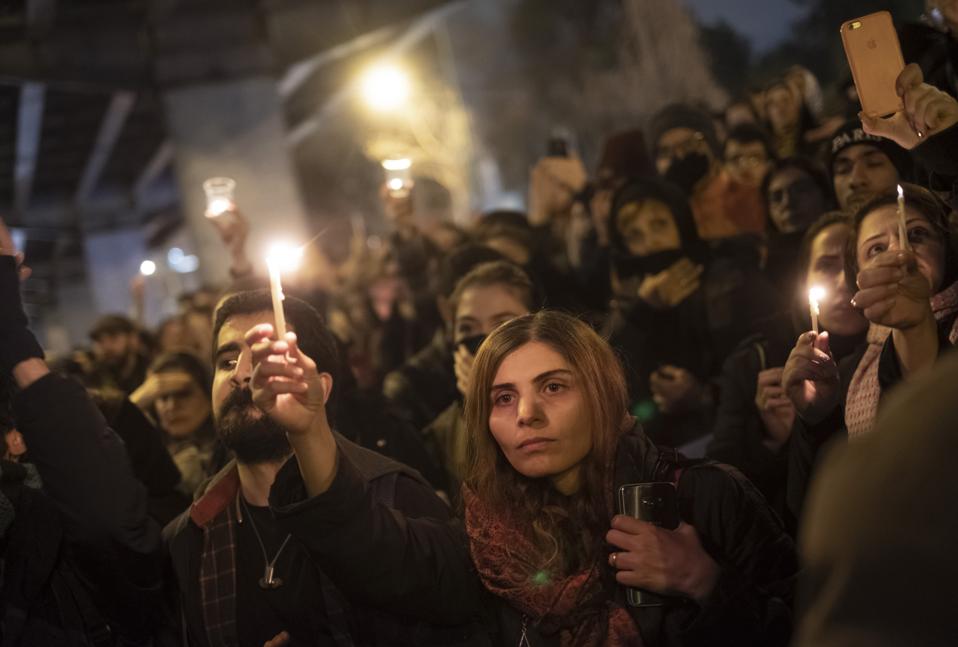 Iranians gather in Tehran’s business district on Saturday for a vigil in memory of the 176 killed … [+] aboard Ukraine International Airlines Flight 752.

When Iran admitted Saturday that its military shot down a Ukrainian airliner, killing 176, a commander stated that the plane was misidentified by an air defense battery as a cruise missile. If that’s true, that’s not the end of the soldiers’ poor judgment. A tragic irony, defense experts say, is that if they really believed they were facing a cruise missile, they fired from a distance at which they most likely would have missed such a small, maneuverable target, throwing their interceptor missiles away.

The decision to open fire came after the operators of the surface-to-air missile battery appear to have missed out on a host of details and safety procedures that should have allowed them to identify the object on their radar screens as an airliner, calling into question whether they were sufficiently trained, experts say.

“It’s hard to envisage how they could have gotten it so badly wrong in so many areas,” says Justin Bronk, a fellow at the London-based Royal United Services Institute for Defence and Security Studies.

The aerospace commander of the Islamic Revolutionary Guards Corps, Amir Ali Hajizadeh, said in a televised speech Saturday that Ukrainian International Airlines Flight PS752 had been shot down by a mobile air defense unit deployed to protect a sprawling IRGC ballistic missile base near the Tehran-area village of Bidganeh in the wake of the U.S.’ targeted killing of Iranian commander Qassem Soleimani. Hajizadeh said the air defense unit misidentified the 737 as a cruise missile when it was 19 kilometers (11.8 miles) away. On Tuesday, Iran said it had arrested an undisclosed number of people in connection with the incident.

They are believed to have been operating a Russian-made Tor-M1 surface-to-air missile battery, commonly known in NATO countries as the SA-15 Gauntlet. It’s a short-range, vehicle-mounted system intended to provide a last line of defense against guided munitions, cruise missiles and aircraft.

Security camera footage published by the New York Times on Tuesday shows the flight of two interceptor missiles from launch to detonation, which provides a basis to estimate where the air defense battery was located: 12.9 kilometers (8 miles) away from where the first missile intercepted the plane, likely parked at the southern end of the Bidganeh missile base, estimates Carlo Kopp, a defense analyst and cofounder of the think tank Air Power Australia.

That’s beyond the 12-km maximum range of SA-15 missiles listed by the manufacturer, Almaz-Antey. Even assuming actual performance is better, the distance and the geometry of targeting a hostile aircraft on the flight path the airliner was on made launching missiles at that point a “hail Mary shot,” says Kopp, and one that training manuals for the Soviet-pedigree system discourage taking.

They were firing at their target from the side of the aircraft, making it harder for the SAM battery’s fire control system to predict how far ahead to aim at what they ostensibly believed to be a highly maneuverable weapon. Even with a 737, says Kopp, a course correction to the south after the missile was launched could have led to a miss. “In the 16 seconds the missile was flying out, the jet might have increased its distance relative to the launcher by a small number of kilometers, so when the missile arrives at that distance, its guidance stops working and it is flying ballistic like a thrown rock,” he says. 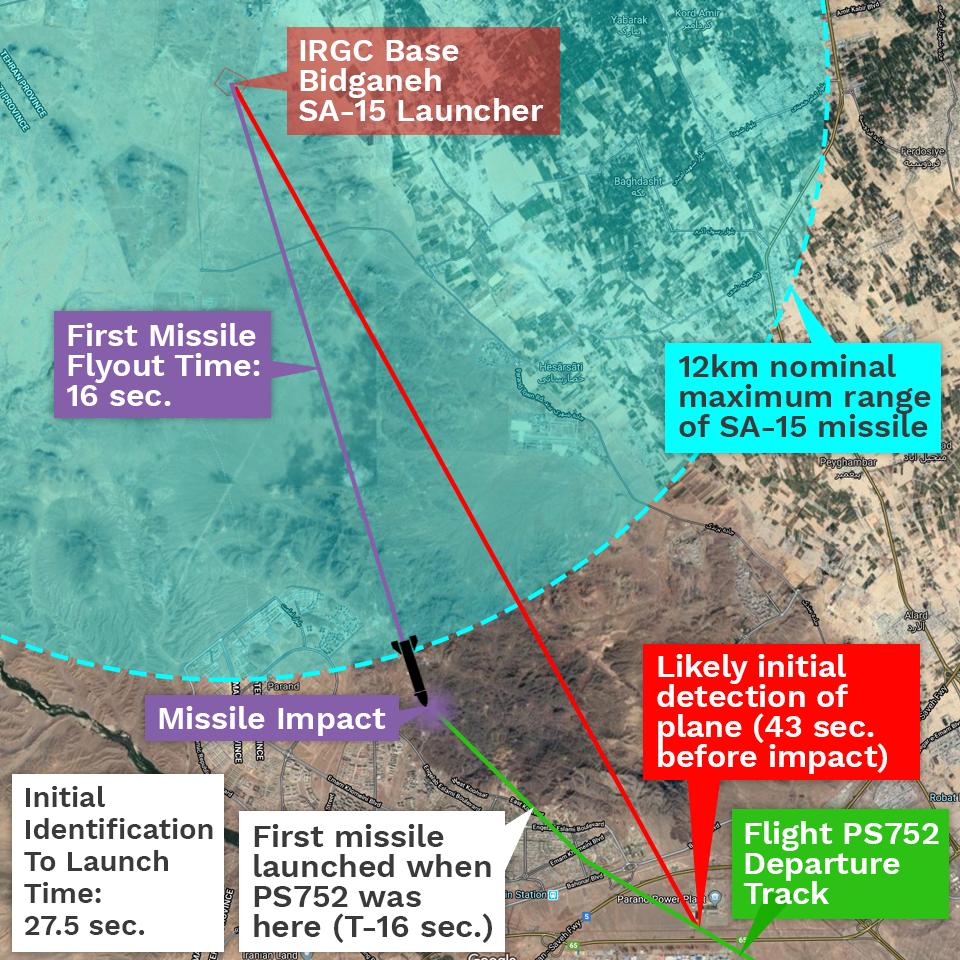 What appears to have happened is that with the plane flying straight on a northwest heading, the first missile detonated near the nose of the plane, taking out its communications, including the transponder that transmitted its location, and starting a fire. After a second missile strike 23 seconds later, it appears on the New York Times video to be ablaze.

It’s unclear how the SA-15 operators could have misidentified an airliner as a hostile aircraft, much less a much smaller and faster cruise missile. The 737 was broadcasting a unique identification code and flying on a commonly used departure path from Tehran’s Iman Khomeini airport, climbing to 8,000 feet at a relatively sedate airspeed of 315 mph. Cruise missiles usually fly close to the ground at altitudes under 250 feet, and at speeds of 550 mph and up.

Another discordant note is that the air defense unit is said to have determined that the object they were tracking was a cruise missile when it was 19 km away. Given the small size of a cruise missile, the SA-15’s search radar isn’t able to produce a stable targeting track to shoot at from so far away, Kopp says. Only a large object like the 737 would.

“When the IRGC leadership say the operators thought it was a cruise missile, it says to an expert that the operators did not understand the limitations of their equipment,” he says.

Given that the SA-15’s role is generally limited to short-range protection around military targets and the limited resources of the Iranian military with the Iranian economy in crisis, it’s possible that the crew hadn’t received much training on dealing with civilian aircraft, says Bronk. “Priority for in-depth training on airspace deconfliction with air traffic control might have been directed to other units operating longer-range [air defense] systems,” he says, like the S-200 and S-300.

Iranian air defense forces likely were operating under looser rules of engagement in anticipation of a potential counterstrike to a barrage of missiles Iran had launched hours before against U.S. bases in Iraq. The SA-15 crew also may have been fatigued after being on alert for the five days since Solemaini’s death, and were under heavy psychological pressure, knowing that they could well be targeted by the U.S. Air Force, which is given to commencing campaigns by wiping out enemy air defenses like their unit to allow its warplanes to operate with greater freedom.

IRGC air commander Hajizadeh said Saturday that the air defense unit had 10 seconds to decide whether to fire or not and were unable to contact their superiors. “Unfortunately, because of the hasty decision of one person, this great disaster happened,” he said.

Kopp estimates 27.5 seconds was taken to decide to launch if the plane was misidentified as a cruise missile from 19 km away, not out of keeping with the amount of time an SA-15 unit would have to react against a hostile fighter jet.

The SA-15 Gauntlet is a system developed toward the end of the Soviet Union, and its controls reflect the makeup of the air defense troops in the country’s conscript army, Kopp and Bronk say, which provided a pool of university students pursuing science and engineering degrees and others with a good basic level of education.

As opposed to the all-volunteer U.S. military, which can design weapons systems with deceptively simple user interfaces that contain a complicated range of options that it heavily invests in training soldiers on, Soviet air defense systems have “a load of buttons and switches on the consoles,” says Bronk, but most do one thing only.

The aim was to allow them to train a large number of technically competent people en masse to an adequate level of fluency.

“They require more training to get a basic level of operator competence on, but once you have that operator competence, they’re quite straightforward systems,” says Bronk. If you haven’t learned the manual, “it’s going to be bewildering.”