Breaking
What You And Your RTO Business Need To...
4 SEO Trends for Websites You Should Not...
3 Reasons Why Desk Booking Is Rising In...
8 Tips to Play & Win at Online...
How can software benefit facility management?
Do Professional Casino Players Pay Taxes for the...
Becoming a Trading Expert: What Is the Best...
Dos and Don’ts for B2B Organisations in 2022
Should your business be using Machine Vision?
Colour Masterbatch vs Raw Pigments – Which Is...
Keeping your business moving as you expand online
Top Four Celebrities Who’ve Invested In Cryptocurrency
Why is Cloud Computing Tipped to be the...
How to Raise Money for Non-profit Organizations in...
Choosing the right theme for your WordPress Business...
A Guide to Using Celebrities to Promote Your...
Home Business If The Virus Can Decimate Global Economies So Can Climate Change
Business

If The Virus Can Decimate Global Economies So Can Climate Change 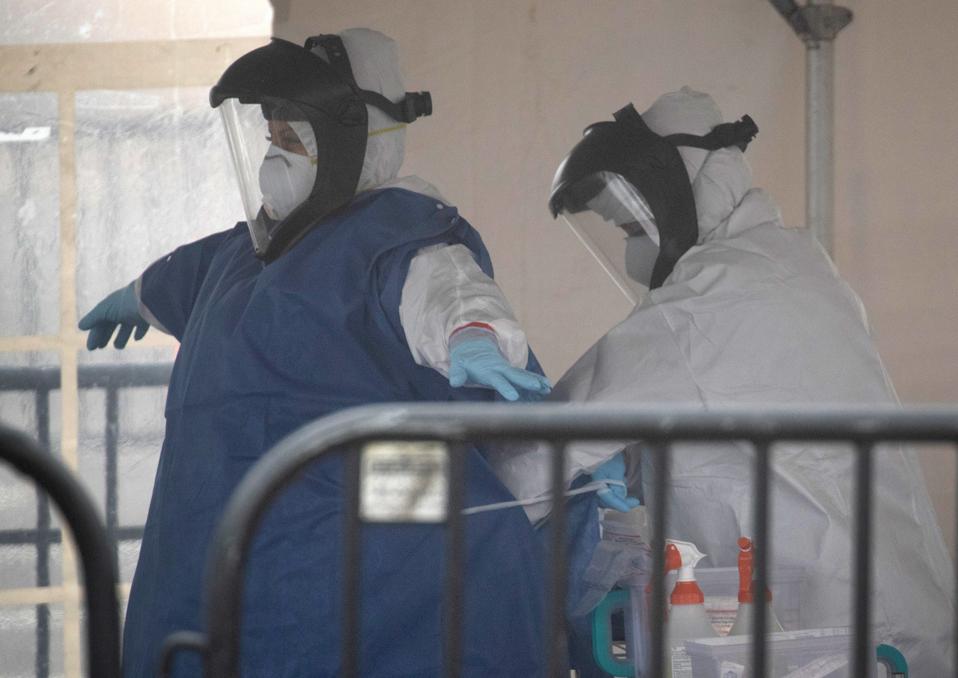 STAMFORD, CT – MARCH 20: Health workers change personal protective equipment at a coronavirus … [+] (COVID-19) drive thru testing location operated by Murphy Medical Associates at Cummings Park on March 20, 2020 in Stamford, Connecticut. “We are still at the beginning of this public health emergency and it is my goal to ramp up our testing capacity as soon as possible,” said Stamford Mayor David Martin. Communities throughout the United States have begun opening drive-thru sites to test people feeling potential symptoms of COVID-19 and that have a doctor’s referral. (Photo by John Moore/Getty Images)

When the Berlin Wall fell in 1989 and the Soviet Union ultimately collapsed in 1991, the world changed. The end to the Cold War corresponded with prosperity, balanced budgets and the rise of dot.coms. The new millennium would transform American life — from how we buy goods to how we earn livings.

Global leaders were forced to think outside the box — to imagine the unimaginable. Could communism collapse? Could brick-and-mortar businesses tumble while Americans shopped online? Could terrorists strike and knock down the World Trade Center buildings?

Today, the international community faces a new threat — an invisible virus that has infected millions and killed 40,000 to date. It is shutting down commerce and wounding economies too. Great thinkers are wanted now more than ever: if a virus can disassemble livelihoods so too can climate change — another amorphous problem that has been allowed to fester and that needs leadership.

Congress just passed a $2 trillion stimulus plan and one that focuses on getting people back to work and putting money in their pockets. It also helps small businesses and gives breaks to bigger industries such as the airline industry. But nowhere in that package — double the size of the 2009 Obama stimulus — is an investment in infrastructure and green energy. That’s why the U.S. House is now working on a separate stimulus bill that would allocate money to highways, airports and seaports. It’s also supported by Donald Trump.

This could be a win-win: The American Society of Civil Engineers says that the nation’s infrastructure is in decline and needs as much as $2 trillion in investment — something that facilitates commerce and generates jobs. The Democrats, meanwhile, want money poured into low-carbon assets — things like new solar and wind farms as well as advanced broadband and telecom. Label it what you like, but this is really a Green New Deal.

“There needs to be a higher degree of international cooperation and information sharing,” says Joseph Majkut, director of climate policy for the Niskanen Center, which is a free-market think tank that is addressing global warming. “We need to make society less prone to risk and to have more effective responses,” he explained to this writer. “Now we are just trying to pick up the pieces.

“On climate, the Trump administration has tried to undo everything that the Obama administration started — from addressing pandemics to addressing climate change,” he adds. “It is a demonstration of what happens when you do not take the risk seriously. This attitude is really dangerous.” 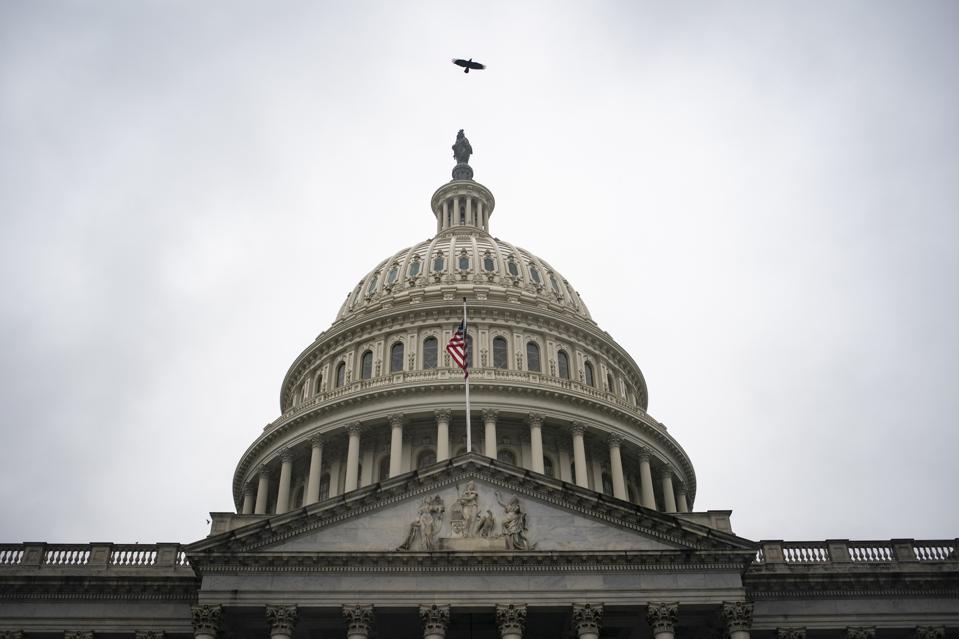 A bird flies over the U.S. Capitol in Washington, D.C., U.S., on Monday, March 23, 2020. U.S. … [+] senators in both political parties expressed confidence the Senate will approve a broad economic stimulus measure to address the coronavirus crisis later Monday, despite Sunday’s failed procedural vote on a Senate GOP measure that would have begun debate while talks on a bipartisan replacement bill continued. Photographer: Al Drago/Bloomberg

Trump was rightly lambasted for ignoring the early warnings that the coronavirus was sweeping the world. At the same time, Americans learned he disbanded an established pandemic response team in 2016, saying publicly that he didn’t want any deadbeats and that he took no responsibility for the spread of the virus. The objective is not get blindsided. One can always try and second-guess policy decisions. But to ignore possible outcomes is reckless.

To that end, the world has been put on notice. Climate scientists who have been peer-reviewed fear that temperature increases could exceed the goals set by the 2015 Paris agreement: keeping such rises to more than 2 degrees Celsius or 3.6 degrees Fahrenheit by mid-century, from pre-industrial levels. The concern is that those thresholds would be eviscerated and climb to as high as 4 -5 degrees Celsius and 7 degrees Fahrenheit.

“The pandemic shows that delayed action brings significant economic consequences,” says IRENA Director General, Francesco La Camera, in an interview with this writer. “It is critical that while we protect jobs and livelihoods, we remain committed to the unchanged need to decarbonize our societies and meet sustainability goals. The energy transformation and acceleration of sustainable energy may address both concerns. For many reasons, now is the time to prioritize investment into sustainable energy infrastructure.”

Consider: Bloomberg New Energy Finance now says that the global demand for solar-powered electricity will fall by 16% in 2020. It had predicted 121-152 gigawatts of new capacity. Now that forecast is 108-143 gigawatts.

The virus and resulting economic decline have increased the odds that the tax credits offered to wind and solar will get extended. Ditto for those pertaining to electric vehicles. And it’s also possible that new credits for energy storage and microgrids will get considered. The American Society of Civil Engineers says that new monies are needed for waste and drinking water assets as well as public transit, roads, bridges and seaports.

The private sector stands ready to lead: Xcel Energy has said it will deliver carbon-free electricity by 2050 and 80% by 2030. NRG Energy, meanwhile, has vowed to cut its CO2 emissions by 50% by 2025 and net-zero by 2050. Southern Co. also said that it has similar goals while the Northern Indiana’s Public Service Company said that it is replacing all of its coal-fired generation with renewables by 2028 — something that will save it $4 billion over 30 years.

“The economy is collapsing and we need to get people relief,” says Costa Samaras, the director of Carnegie Mellon’s Center for Engineering and Resilience for Climate Adaptation, in an interview with this reporter. “Infrastructure is a natural way to get the economy moving and we can borrow cheaply right now.

“It is the role of government to protect and to invest in this nation for the immediate and long term,” he adds. “The goal is to ensure that the country is not just resilient but that it is climate-resilient.”

The lessons learned from the health pandemic are clear and they have implications for climate change. The United States should be leading but instead, it has become a drag on international progress. This can all change: marrying the need to build a modernized infrastructure with the desire to reduce CO2 levels could move the country forward. It’s about being proactive and preparing for external threats, all to prevent the kind of calamity caused by 9-11 and COVID-19.

How To Manage Innovation During A Recession