Breaking
John Kerry As Presidential Climate Envoy: Virtue Signaling...
Increased Risk Of Chronic Conditions Associated With Early...
Top ETFs This Week As Dow Ends Day...
As Biden Admin Eyes Canceling Student Loans, Taxpayers...
How Social Media Is Helping Cryptocurrency Flourish
Here’s What You Need To Know About AstraZeneca’s...
Mini Gifts: What To Get For Your Colleagues...
How to Tell if You’re Shadowbanned on Social...
Report: Biden Picks Janet Yellen For Treasury Secretary
Policy Priorities
How To Poise Your Business For Success (And...
Eight Key Steps To Landing Your Product In...
Brands That Are Redefining Black Friday
How Much Room Is There For E-Kick Scooter...
Why We Must Update The Law For The...
The Tax Rules For Home Businesses And Working...
Home Technology In 30 Days A Country Of 9.6 Million People Will Send A Mission To Mars. This Is What ‘Hope’ Can Do
Technology

In 30 Days A Country Of 9.6 Million People Will Send A Mission To Mars. This Is What ‘Hope’ Can Do 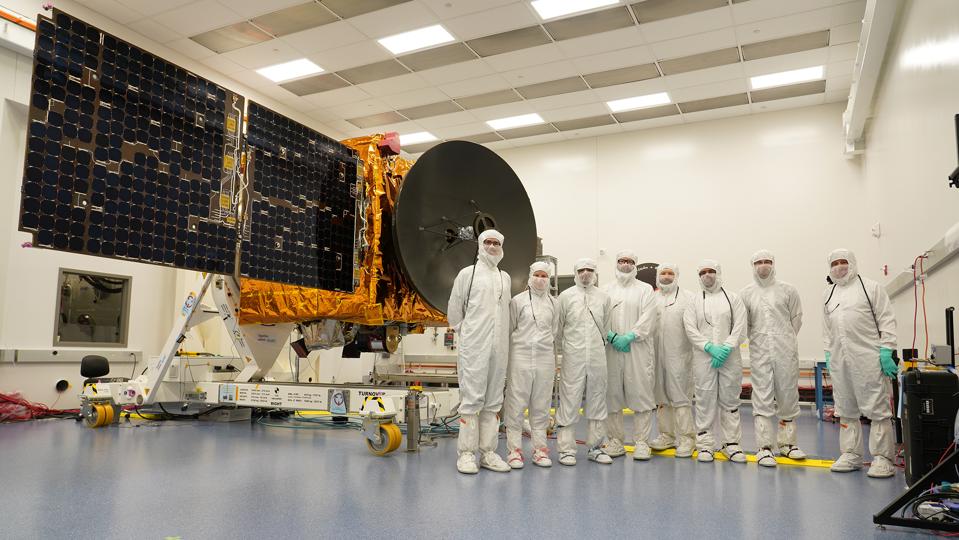 How can a small country in the Middle East with a combined population of just 9.6 million launch a mission to Mars?

That’s exactly what will happen on the July 15, 2020 when the United Arab Emirates (UAE) will launch its Emirates Mars Mission (EMM)—carrying a probe called “Hope”—to begin a seven month-long journey to the Red Planet.

What is the Emirates Mars Mission?

It’s a Mars orbiter that was developed by the Mohammed Bin Rashid Space Center in Dubai, UAE in partnership with the Laboratory for Atmospheric and Space Physics at the University of Colorado, Boulder. The orbiter will reach Mars in February 2021 and begin studying the Martian atmosphere in late 2021. It aims to build the first full picture of Mars’ climate throughout the Martian year.

The UAE government’s national objective is to reach Mars by December 2021—the end of the country’s 50th anniversary.

How is the UAE reacting to EMM?

The UAE is getting excited. “It’s coming at a difficult time for everyone so it’s been refreshing news,” said Sarah Al Amiri, the UAE Minister of State for Advanced Sciences and Deputy Project Manager of the Emirates Mars Mission, to Forbes. “We’ve had a flood of questions about the project from students, about the science and how they can get involved … we’ve had to take another look at gatherings for launch events, but we’re looking to do something online.”

The effect of COVID-19 on preparations

Thanks to some prescient just-in-case planning for a pandemic-like scenario, the mission has made its way from the Middle East and is now on the launchpad in Japan ready for launch. “We’re in the launch campaign phase—the spacecraft is fuelled and ready for launch,” said Omran Sharaf, Project Lead for the Emirates Mars Mission, to Forbes. “We had to ship it earlier than scheduled because of COVID-19 and split the team, basing some of them in Japan for four months.”

The launch window for EMM opens on July 15, 2020 and closes on August 3, 2020. Miss that and it’s impossible to reach Mars. The entire mission would then need to be delayed until September 2022. 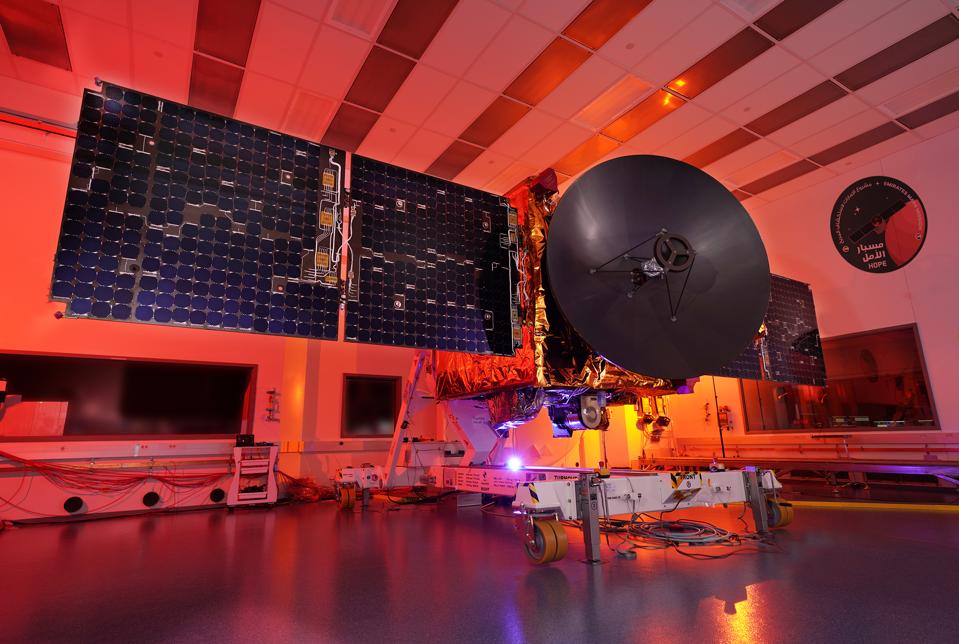 Why is the UAE going to Mars?

Although the mission will fill gaps in planetary scientists’ knowledge of how the Martian climate affect its atmosphere. However, the UAE is very clear that its space program is actually not about space, but about its economy. “Reaching Mars is not the main objective here—this is about strengthening our knowledge economy by making it more innovative, creative and competitive,” said Sharaf. “It’s about the post-oil economy.”

The UAE currently produces about 2.9 million barrels of oil per day. It’s consequently the third-richest country in the world (below Luxembourg and neigboring Qatar), but its desperate to move beyond the petroleum and petrochemicals industries it’s focused exclusively on for too long. “When this mission was announced back in 2014, the UAE didn’t have a council for science, a minister for science, or a platform for incubating and nurturing the scientific community,” said Sharaf. “Now we have all that.”

“The UAE government made it clear from day one that space is a tool for much bigger goals,” said Sharaf. “This is about causing a big disruptive change in the system that integrates science and technology into the UAE’s economy, but we’ll have to wait for 10-15 years to see the impact.”

EMM comes as part of the UAE’s wider space program that dates back to 2006; three of the UAE’s satellites already orbit Earth.

Sure. “This mission is five times more complex than previous missions we’ve worked on at the Mohammed Bin Rashid Space Centre—it takes us to the next level,” said Sharaf, who is under no illusions.

“Let’s be honest here—50% of missions to Mars fail,” he said. “The journey is risky—one mistake in your trajectory and you’re going to miss Mars. A single mistake in the launcher makes it all go away. We also have to cope with 15-20 minutes delay in communication with the spacecraft, so it needs to be fully autonomous and resolve issues on its own.” That’s wholly unlike Earth-orbiting satellites, which operators can have real-time contact with.

How does ‘Hope’ compare to NASA’s Maven mission?

NASA’s Mars Atmosphere and Volatile Evolution (MAVEN) spacecraft went into orbit around Mars in 2014 to study the structure and composition of the planet’s upper atmosphere. Specifically, the loss of its oxygen and hydrogen because of the solar wind. Hope will add a new dimension. “We know that there are dust storms, clouds, and seasonal cycles on Mars, but there hasn’t been is a mission that has provided a comprehensive view of the weather system across all regions of the planet across all times of the day,” said Al Amri.

What Hope will do is to see what role Mars itself plays in climate change and the loss of its atmosphere.

Hope will be able to collect data from the same locations at different times of day and season, and from further out for a more global perspective. “Hope will better categorize all regions of Mars across an entire day,” said Al Amri. “We know from Earth that weather is dynamic and changes from hour to hour—that’s the gap that the Emirates Mars Mission fills with regard to planetary science.”

The data collected by Hope will be made freely available to the scientific community. 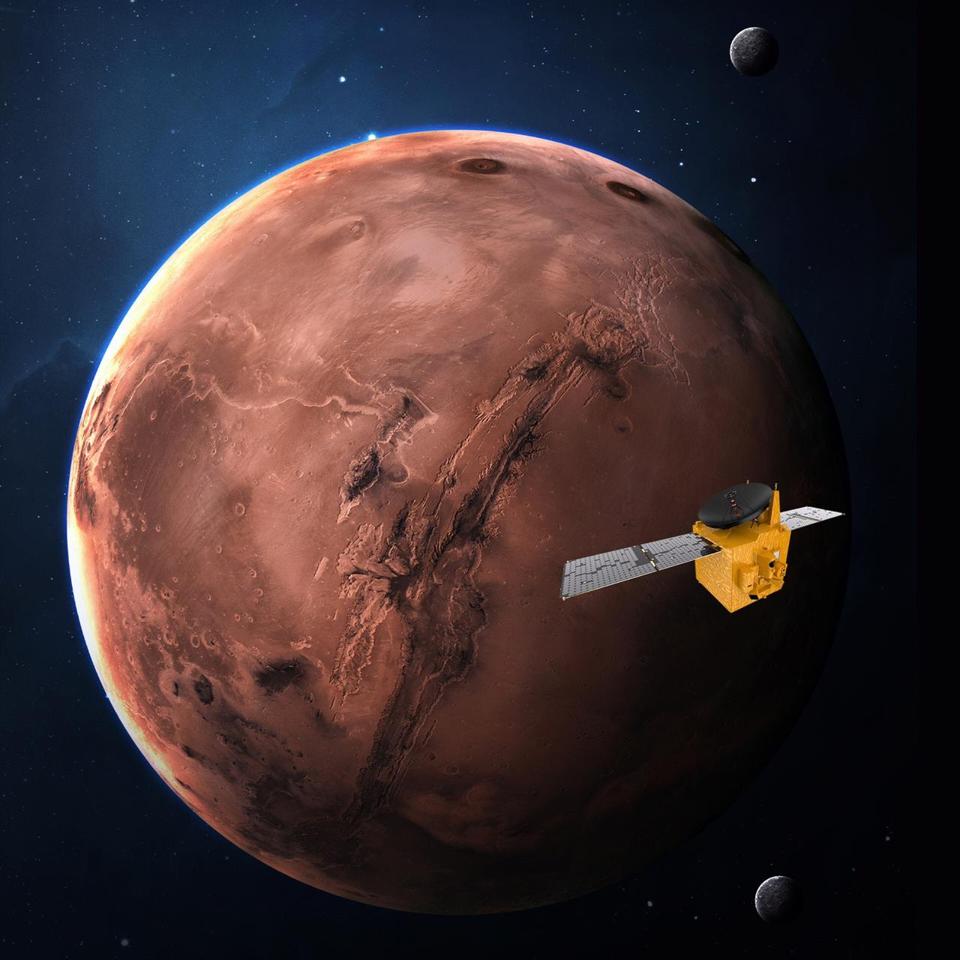 Hope probe will reach Mars in February 2021 and aims to build the first full picture of Mars’ … [+] climate throughout the Martian year.

Will there be other UAE missions to Mars?

“It’s not a one-off—it’s part of a bigger UAE national space program that will be focused on missions around Earth and beyond,” said Sharaf. However it’s supposed to be sustainable—and that means low-cost. “This is out first outer space mission and that there are a lot of challenges. So for now we’re trying to focus on this one.”

Trump Mentions AIDS Vaccine That Does Not Exist, Predicts Covid-19 Vaccine By End Of 2020

5 Ways To Advance Digital Trade In The Post-Covid World