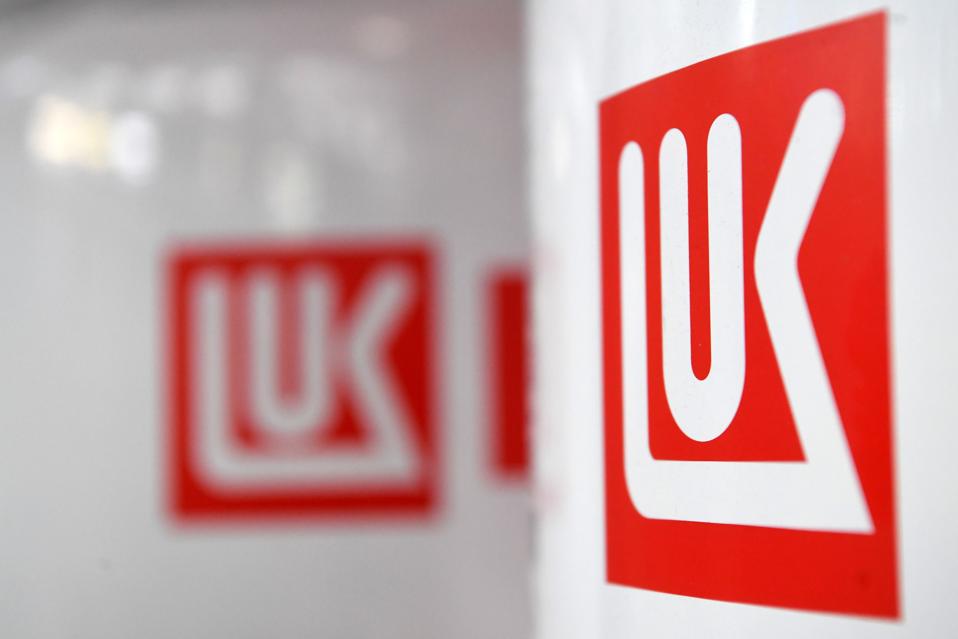 Nobody likes fossil fuels anymore. Especially if you’re a woke fund manager in the U.S. and Europe. Oil and gas bad. Chickpeas and wind good.

As U.S. energy remains one of the most hated, money losing sectors on Wall Street, their Russian counterparts are, let’s face it, runaway trains. Nothing can stop them. Not sanctions. Not Greta Thunberg. Russia is not burning, or melting, despite a warmer winter. The locals are less worried about climate change, and they’re helping to prop up Russian oil and gas firms like Lukoil.

Measured in dollars, investments in Lukoil stocks — including from American and European teacher retirement funds, life insurance policies, and boring things like that that need to preserve or grow capital in a near zero-interest rate world — are up 163.4% over the last five years. That takes us back to 2015, when Russia hate was just beginning to go full tilt. Sanctions were on because of the Ukraine imbroglio. Lukoil was hit with sanctions that banned corporate partnerships from the U.S. that would help them drill for oil and gas, especially offshore.

Meanwhile, Exxon shares are down 24%. The SPDR Energy Select (XLE) exchange traded fund which invests across the U.S. energy space is down 25%. Money down the drain; hated, and lost, just like the oil and gas industry these days.

Lukoil shares are also up 36.2% over the last 12 months. XOM and XLE are down. Lukoil is still trading at 6.6 times earnings. Exxon trades at 18.3 times, meaning despite being a money loser, it’s three times more expensive than Lukoil.

Russia doesn’t hate oil and gas. Nor does West Africa, where Vladimir Putin and others have been successful at convincing governments there to bring in more Russian energy drillers.

Wait for it: fossil fuel producers will be likened to Russians. And Russians are bad. ESG fund motto: No Russians. 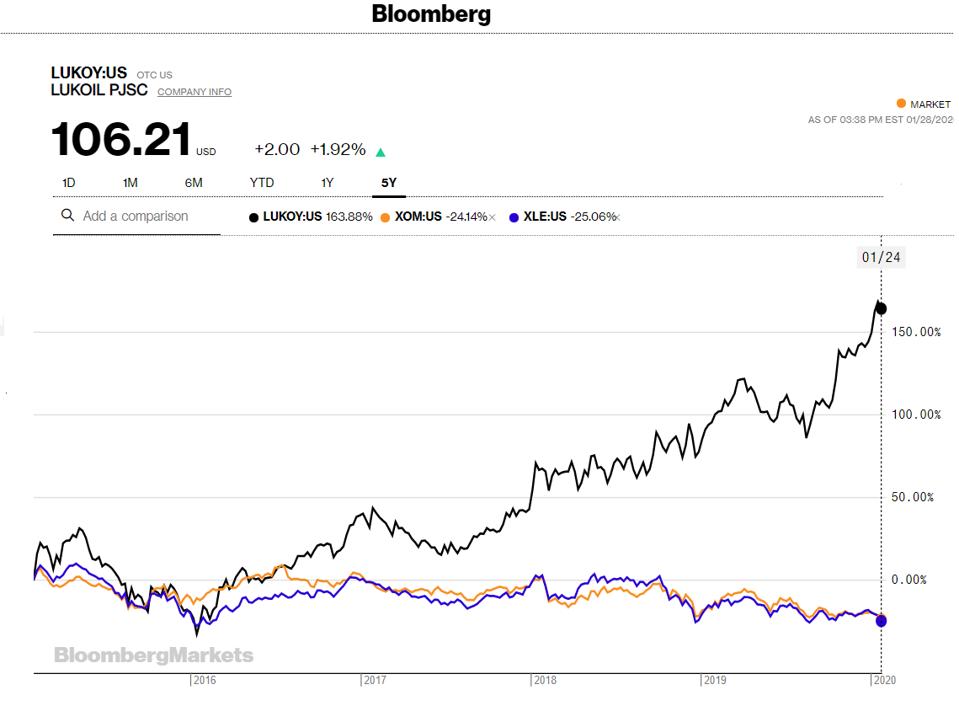 Russian oil company LukOil, despite oversupply there, has outperformed their U.S. counterparts. If … [+] supply records are the same in both countries, what is driving U.S. energy underground? Is it divestitures on behalf of big, institutional investors? Maybe.

Lukoil pays a dividend. Their current yield is over 5% in dollars, similar to Exxon’s.

Lukoil will invest $100 billion, or around $10 billion a year for the next 10 years, expanding its footprint throughout the Caspian Sea area, the Baltics, and in parts of Western Africa, the company’s president, Vagit Alekperov, told told Russian business daily Kommersant on Tuesday.

Much of their Africa investment will be in liquefied natural gas. They’re not licensed to do that in Russia yet.

Alekperov said that West Africa energy deals opened up after the Winter Olympics in Sochi in 2014, when president Vladimir Putin met with heads of state and lobbied for its energy firms. Lukoil seems to have benefited from those meetings.

Lukoil acquired a stake in a natural gas project in the Republic of Congo last year, and signed cooperation agreements with Nigeria, Africa’s biggest energy producer and most populous country.

Russian energy companies are on a tear, despite sanctions, and despite countries in Europe relying less on fossil fuels to generate electricity.

The Ukraine is now back in a transit deal with Gazprom to ship gas via pipeline into southern Europe after being sidelined for many years due to political fights between Kiev and Moscow.

Germany is holding fast to its promise to build a secondary pipe alongside the existing Nord Stream line, known as Nord Stream 2, despite threats of sanctions on the pipe layers and others. 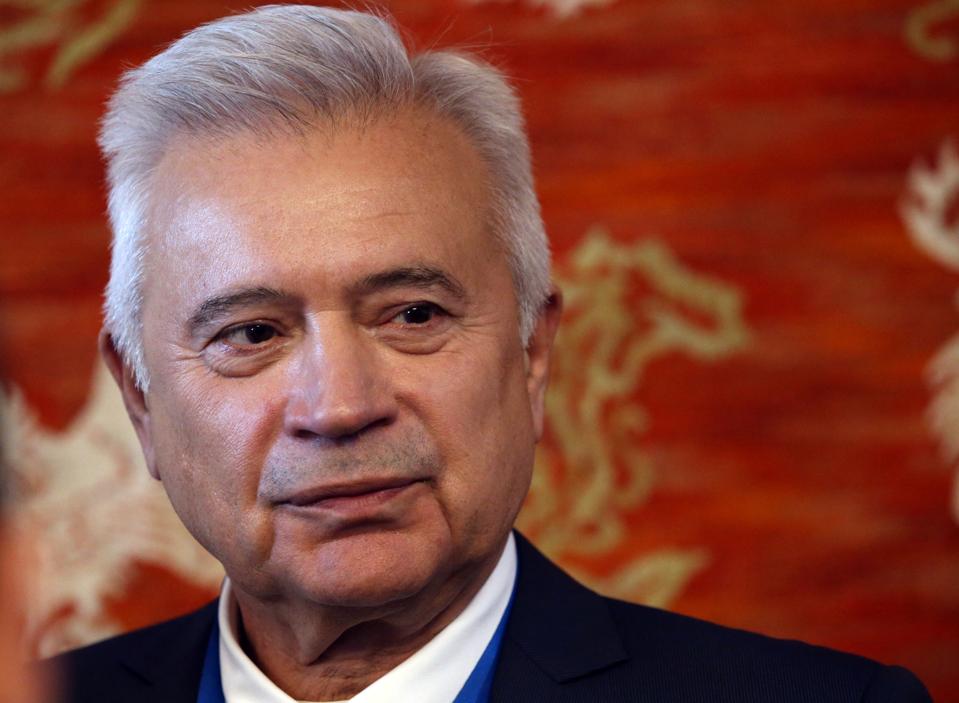 Russia’s Rosneft once had a joint venture deal with Exxon to drill for hydrocarbons in the Kara Sea. That deal was originally priced at around $720 million. It’s dead.

Russia and the U.S. are no longer partners in the global energy business. And while U.S. firms are divesting and taking money away, Russian firms are seeing new money flow in, and returning some of it to shareholders.

Alekperov said Lukoil will continue focusing on the Caspian basin this year and new developments along the Baltic shelf. They created a new program for the development of gas and petrochemicals at their existing facilities in Russia, so that all the derivatives of oil and gas extraction can be created, packaged and exported at a time when European rivals are bowing out as corporate investors like Shell are investing in offshore wind farms.

Lukoil is one of the three largest taxpayers in Russia. They paid more than 1.3 trillion rubles ($208 billion) in taxes in 2019, the company said.

They also claim to be good corporate stewards, even if their main business is seen as the main reason why the Earth’s poles are warming. 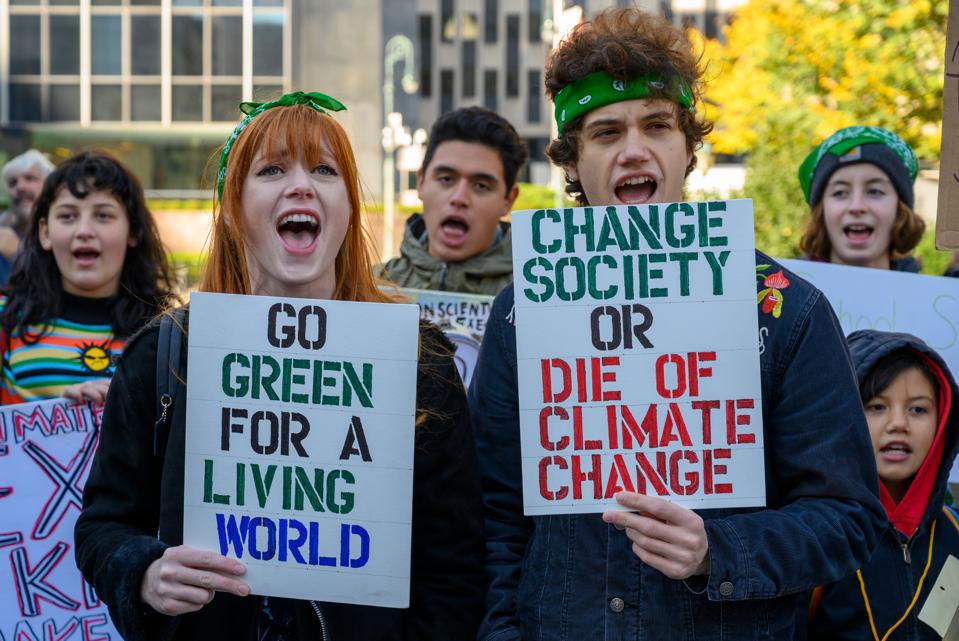 They’ve funded the Galaxy Sports and Cultural center in Sochi; a branch of the Maly Theater in Moscow, and the Chapel of the Holy Martyr Tatiana in the fear eastern city of Vladivostok. An extended branch of the State Russian Museum is also partially funded by Lukoil gifts. It remains an important part of Russian society, and its labor market.

Lukoil’s Alekperov said that the company is preparing for a future in new energy technologies, investing in research and development in the fuel and energy space, without getting into too many details.

European funds have been divesting from fossil fuels for at least five years.

Last summer, one of Exxon’s largest shareholders, Legal & General Group Plc, divested 19 of its funds from the company and said it will ask its clients if it can withdraw even more money from Exxon, saying it is a contributor to climate change.

Leading Democratic candidate Bernie Sanders says that he would hold fossil fuel executives accountable if he was president, meaning U.S. energy stocks will tank if Sanders gets the nod from the Democratic Party later this year and is seen leading in the polls against incumbent President Donald Trump.

Unless the rest of the world outside of Europe and the U.S. also do away with oil and gas, then perhaps the Russian ones will be best positioned, and best funded, assuming Western home markets are going to continue defunding oil and gas companies for not doing enough to stop climate change. For most climate activists, the only thing they can do is go out of business.

Is China Threatening America’s Dominance In The Digital...