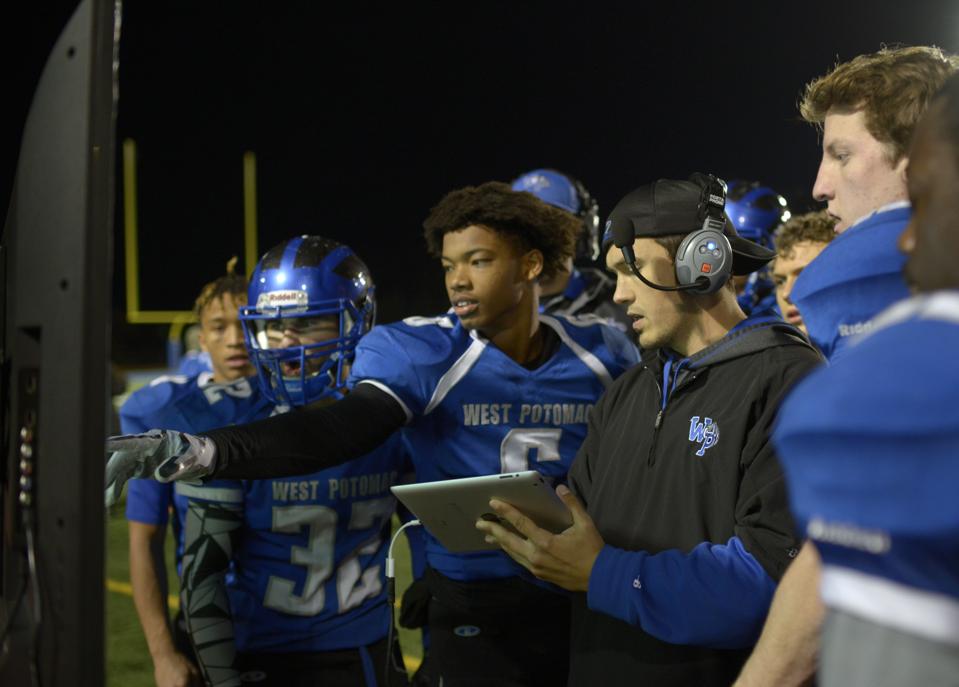 On the sidelines during games, high school football teams are increasingly using tablets to glean … [+] analytical information to help them win.

Instead of immediately sending out the punt team on fourth down, coaches can now check their iPad on the sideline to determine the best course of action.

Based on score, ball position, opponent and time on the clock, high school offenses use EdjSports’ web-based app before a first down to project how many yards they will need to pick up on the ensuing three downs to justify going for it on fourth down.

“That’s what they really love — to be able to know that in advance,” said Frank Frigo, co-founder of EdjSports. “It can dictate playcalling.”

In its debut last season, EdjVarsity supplied this kind of data analytics to 47 high schools, including Southern California powerhouse, Mater Dei High School. And this year — after meeting with the American Football Coaches Association (AFCA) and developing a new sales force — they expect a few hundred programs to implement it.

It is also picking up steam on the higher levels as the technology has been adapted for the college ranks.

“We’ve got a lot of meetings with Division-I teams coming up,” Frigo said. “There has been a lot of early interest in what we’re doing.”

Formed seven years ago, EdjSports (pronounced like edge) looks at how decisions can be derived from data to give teams an edge. Based in Louisville, Ky., the company has 45 employees.

Chuck Bower, an astrophysicist at Indiana University, and Frigo, an energy trader and world champion backgammon player, played backgammon together and saw the impact programming could have upon those kinds of skill-based games. They sought to apply the same kind of technology to examine the decision-making of NFL coaches.

“There had always been talk about coaches being too conservative,” Frigo said. “We wanted to prove it.”

A simulation model to examine that decision-making was the start of the company.

Last year it bought the Massey Ratings, a computerized methodology known for ranking colleges that was used heavily in determining teams that qualified for the Bowl Championship Series.

In June of 2018, EdjSports purchased Football Outsiders, the NFL analytics site, which has a devoted following of two million users, and has created advanced football statistics like Defense-adjusted Value Over Average (DVOA) and Defense-adjusted Yards Above Replacement (DYAR).

That acquisition not only allows them to combine Football Outsiders’ data with their technology, but the strength of that brand also helps EdjSports sell their other products.

“It gives us a lot of validation,” Frigo said, “for sure.”

It also attracted the NFL, and 13 teams use EdjSports’ services. They subscribe to their reports, receive detailed gamebooks in the form of a 400-page PDF to guide their decision-making and even use their two-point conversion charts, assessing when to attempt a point-after-kick. Among its many uses, EdjVarsity determines the win probability at any point in the game.

Adapted from the original model EdjSports used for the NFL, EdjVarsity, which costs $1,500 for a full-year subscription, was developed internally. The interface allows high school coaches to configure their teams and their opponents.

“They have the advantage of being able to use it live during a game,” Frigo said, “which they really like.”

However, one of the most passionate football states, Texas, limits the usage of tablets.

That means some high schools in the Lone-Star State miss out on the technology, which can assess when to attempt PATs or on-side kicks and when to accept penalties, and all of this even accounts for injuries.

EdjVarsity also produces gamebooks, which give the graphical representation of game flow from a win probability standpoint. It can determine which play or plays tilted the contest.

“At the end of the game,” Frigo said, “it’s a really good teaching tool.”

Though analytics has become a buzzword throughout sports, Frigo said this kind of in-game application on the high school level is unique to EdjVarsity.

“There’s a heightened interest in this type of thing,” Frigo said. “We were pioneers.”

How To Survive In An Age Of Consolidation

‘Hillary’ Documentary Series Is A Study In Hindsight,...

David Stern Remembered: Not All Stories Are Fit...