Home Business In Michigan, Hail To The Victor – Who Likely Won’t Be Bernie
Business

In Michigan, Hail To The Victor – Who Likely Won’t Be Bernie 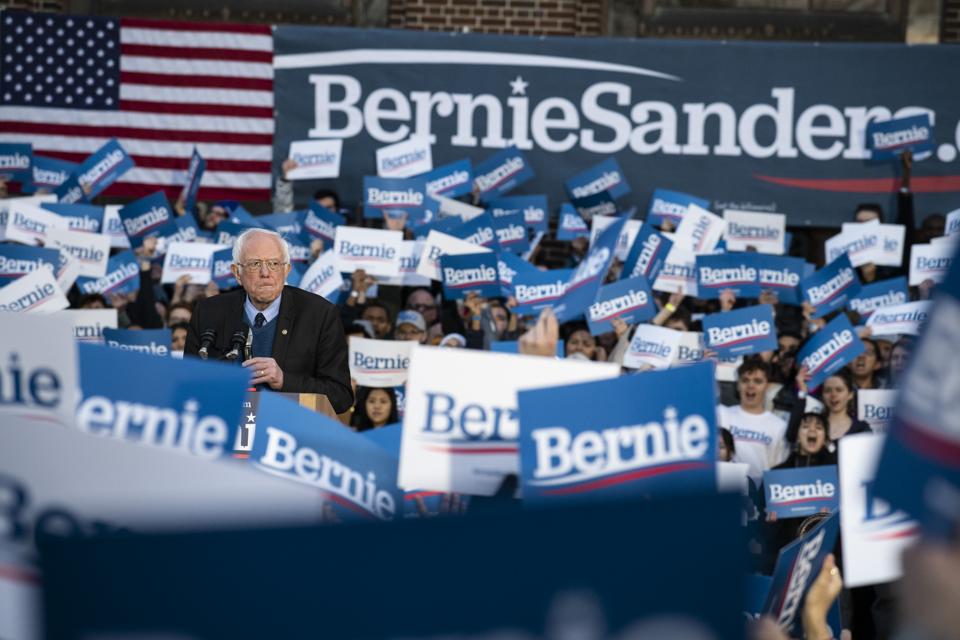 Vermont Sen. Bernie Sanders at a weekend campaign in Ann Arbor, Michigan. Sanders’ pulled off a … [+] primary shocker in Michigan four years ago, but it seems unlikely that lightning will strike a second time. (Photo by Brittany Greeson/Getty Images)

To the adage that a lot can happen in a year, consider what four times that timespan has done to Vermont Sen. Bernie Sanders and his political fortunes in Michigan.

Four years ago and also on the second Tuesday in March, Sanders was the surprise winner in the Wolverine State’s Democratic presidential primary.

By no means was it a landslide victory (Sanders carried the state by all of 17,000 votes, defeating Hillary Clinton by a mere 1.4%).

However, Sanders’ triumph was an earthquake in that it was a jolt that no one saw coming.

Not a single poll taken in the month leading up to the March 8 primary had Sanders within striking distance (Clinton consistently led at least five percentage points). The political handicapper Nate Silver deemed the situation “as among the greatest polling errors in political history” (the only comparable Democratic primary upset, Silver concluded, was Gary Hart taking down Walter Mondale, in New Hampshire, in 1984).

Four years later, forecasting once again suggests a bad night in Michigan for Sanders. This Monmouth University poll has former Vice President Biden up by 15 percentage points among likely voters. For Sanders, its across-the-board rejection. Biden leads by 14% among white voters and 17% among nonwhite voters. He crushes Sanders in the over-50 demographic (a 38% gap) and is the preferred choice among likely women voters (a 20% edge) and self-described Democrats (a 29% lead).

Why isn’t Biden ahead by more in Michigan? Because Sanders leads among likely male voters (by 10%) and he controls the under-50 demographic (a 11% lead over Biden). Voters who call themselves independents or Republicans give Sanders a narrow 3% edge.

How can Sanders make lightning strike twice in the same state? Let’s take a look back at the what exit polls said about 2016’s Michigan shocker.

Similar to Monmouth’s data, Sanders bested Clinton by 10% among male voters, offsetting his 6% deficit among women. Per CNN’s exit poll data, Sanders topped Clinton by 62% among under-30 voters and 9% among voters ages 30-44 (overall, they constituted 45% of the exit poll sample). Clinton carried the 45-64 demographic by 16% and voters 65-and-older by 39%.

Shifting to race, Sanders carried the white vote by 14% and Clinton carried the non-white by 29% (that latter group representing only 30% of the exit poll).

In terms of partisan identification, Clinton carried Democrats by 18% while Sanders scored big with independents (a 43% advantage that the Clinton campaign should have interpreted as a sign of future trouble ahead).

Comparing polling numbers past and present, here’s what spells trouble for Sanders on Tuesday night in Michigan: he’s barely ahead among likely independent voters, whereas that portion of the 2016 primary electorate punished Clinton; his gender disadvantage has more than tripled compared to 2016’s exit numbers; his lead among younger voters (under-50) seemingly isn’t as dramatic as it was four years ago.

Could Sanders still manage to pull off a surprise (other states voting on the so-called “Big Tuesday” include Idaho, Mississippi, Missouri, North Dakota and Washington)? Of course, he could. A week ago, the expectation was that he’d enjoy a better “Super Tuesday” that Biden, which didn’t turn out to be the case. Besides, the idea of Biden as the Democrats’ “chosen one” still takes some getting used to for some of the more progressive elements of the party.

But two factors are now working against the Sanders candidacy – one that likewise existed in 2016; the other a big difference between the two nomination chases.

Unlike Clinton, Biden doesn’t seem to be taking geography for granted. There was no coasting in the days after “Super Tuesday.” On the eve of Michigan’s vote, Biden was scheduled to hold a rally in Detroit with two former presidential rivals, New Jersey Sen. Cory Booker and California Sen. Kamala Harris (is it me, or do such events smack of auditions for ticket and cabinet slots?).

But as in 2016, Sanders now finds himself at the mercy of the calendar.

Four years ago, Sanders didn’t have a good “Super Tuesday” (losing eight of 12 states to Clinton). However, he won Maine two days before Michigan and Nebraska and Kansas the day prior to Maine’s vote. He has momentum going into Michigan that he lacks at present.

But after Michigan, the 2016 calendar turned against Sanders. One week following the big upset, Clinton swept Florida, Illinois, Missouri, North Carolina and Ohio. Sanders did have one last comeback, winning seven of eight states from March 22 to April 9. But Clinton all but put away the race by taking five of six states (including New York and Pennsylvania) that voted in mid-to-late April.

In 2020, the Democratic race may play out the same. A week after Michigan, Arizona, Florida, Illinois and Ohio all hold primaries. Sanders almost pulled off an upset in Illinois in 2016 (Clinton carried her birth state by 1.5%); he received 42.7% of Ohio’s primary vote, 39.9% in Arizona and a paltry 33.3% in Florida.

Georgia votes a week later, on March 24. In 2016, Sanders did worse there (28.2%) than he did in Florida. He may score victories in four states that vote in early April (Alaska, Hawaii, Wisconsin and Hawaii all were pro-Bernie in 2016). But the end of the month could be as punishing to Sanders as it was in 2016: this time, the train-loving Biden racking up delegates in the Amtrak corridor that is Connecticut, Delaware, Maryland, New York, Pennsylvania and Rhode Island (all but Rhode Island were Hillary states in 2016).

How funny it would be if, for all the drama in this contest – Biden’s fall, then apparent rise; Sanders’ rise, then apparent fall; multiple other contenders having a debate “moment” – the script is predictable from this point forward.

Elon Musk: Starlink Will Cause ‘Zero’ Problems For Astronomy

3 Bargain NFL Receivers And 3 Busts, From...

Here’s When ‘The Mandalorian’ And Baby Yoda Return...