Breaking
11 Considerations When Determining An Equity Offer To...
ESG Metrics: A Path Forward For Companies
‘Moriarty The Patriot’ Makes A Hero Of Holme’s...
Mind The 99 Year Gap: How To More...
The WFH Revolution: How Covid-19 Is Changing The...
eToro Announces Staking For Cardano And Tron
Fintech Startups: Plan For Your Customers’ Emotional Realities
The End Of Third-Party Data — Finally
The Scientologist Billionaire Trying To Make A New...
Mission-Driven Fintech Kontist Shakes Up The Future Of...
What Can The Simple Fact That ‘We Exist’...
Stock Market: Here Comes October With Scary Tricks...
Farmers, College Students, And Food Banks Across The...
Thinking Of Writing A Book To Grow Your...
Microsoft Security Report Highlights New Sophisticated Threats From...
3 Steps To Help You Build Entrepreneurial Confidence
Home Finance In Pandemic, Wall Street Better Off In China
Finance 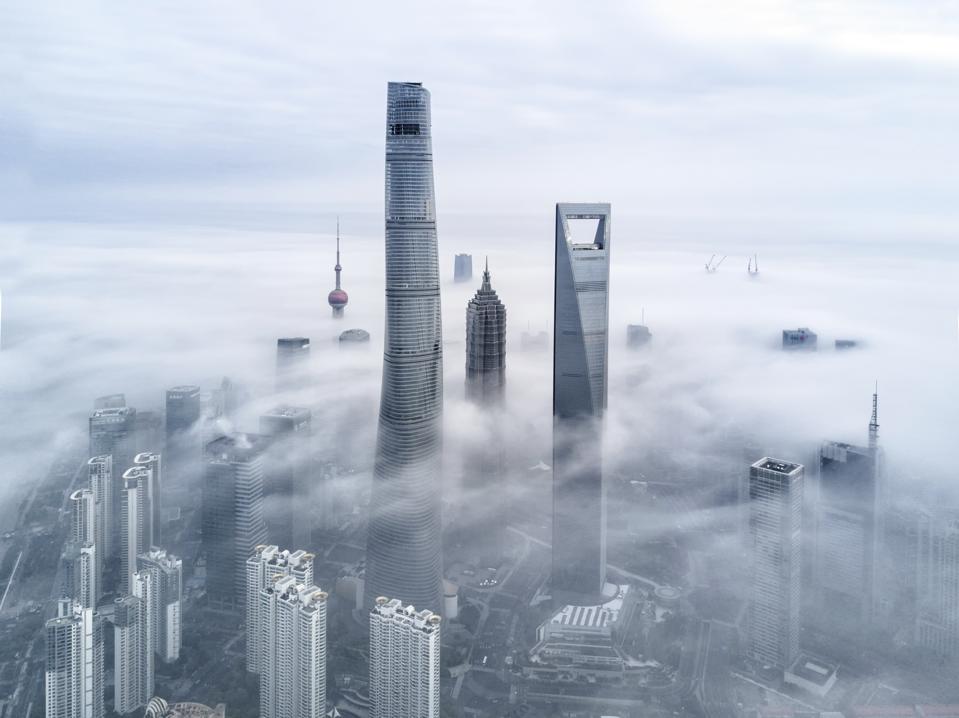 Shanghai rises from the fog. The city has under 1,000 cases of the new SARS coronavirus, despite … [+] being just as congested as New York. Even if their numbers are off, it is clear that this international city faired better than the Big Apple.

This is going to rub the China short sellers the wrong way. But make no mistake about it, if an investor’s goal is to make money, and not lose it, China wins.

China’s stock market has been a better place to be in a pandemic than all of the emerging markets, all of Europe, and the S&P 500.

Also, consider this: In a world where the core economies are not giving savers any yield, China’s investment grade credit pays over 2.5%. If the U.S. doesn’t want to touch it, the Japanese might. London emerging market fund managers definitely will.

The weight of Chinese bonds in JP Morgan’s GBI-EM GD increased to 2% as of end-April 2020. The index weight will eventually reach 10% over the next 8 months, provided that JP Morgan sticks to the schedule.

Throughout the pandemic, China has offered a picture of discomfort but also stability owning to its sheer size and stimulus packages. Trade has been pulling the rug out from under China, however, though that is settling down now.

“China is going to come out of this before anyone else does. It’s a head start,” says Keith Wade, chief economist for Schroders.

China was the first in rehab, but is the first out. China’s renminbi is still weaker because of it, now over 7 at 7.10 RMB to the dollar, though it would be much worse if the government allowed for the locals to invest here, as we are allowed to invest there.

This one-way capital flow, coupled with the fact that China is still the world’s manufacturing hub, means the recovery will be strongest there.

“It is the workshop exporter of the world and its domestic economy seems to grow like Jack’s beanstalk. Sure it’s got lots of debt, but if they never go bust, what’s the problem?” says Sudhir Roc-Sennett, an advisor and head of thought leadership at Vontobel Asset Management.

Does it make sense to weather the storm in China, and venture back out when it’s cleared up?

This only makes sense if you’re an emerging markets fund manager. China is the only thing to pay off. Brazil, Russia, India are all cheap, but in decline as the pandemic ravages their economies.

“It would be great to have a serene emerging market island of growth and stability,” says Roc-Sennett. China is as good as it gets. Looked at from 10,000 feet up, China is the only island Vontobel is going to find.

China accounts for 41% of the MSCI Emerging Markets Index. For a sense of how big China has become, it now has two companies that individually have greater weight in the index than all of Brazil.

President Trump is threatening to increase tariffs, upend the phase one trade deal, and kick some companies off the NYSE and Nasdaq if they don’t abide by Sarbanes-Oxley regulations, the 2002 anti-fraud rules designed to protect shareholders from Enron-style accounting malpractice.

But barring a major blow up with the U.S., there are many Chinese companies that have the structural growth and strength to manage fine through a recession, and through existing tariffs.

E-commerce giant JD.com (JD) is up 44.3% year-to-date, and has short- medium- and long-term bullish indicators flashing green, according to Yahoo! Finance’s premium service.

“If you combine China, South Korea and Taiwan, you got over half of the emerging market index. That area looks kind of interesting from a high growth perspective,” says Crit Thomas, global market strategist for Touchstone. “I’ve always liked India, but I got afraid when I saw them go into lockdown. The developed world ex-U.S. space, I just don’t like what I’m seeing in Europe and Japan either,” he says.

“So looking out into the recovery cycle, how do you want to position? I’m still trying to think it through. There’s always the barbell strategy: safety in one side, and recovery power on the other side,” says Thomas.

China right now has all the recovery power. Who else has it?

This Friday, the National People’s Congress will convene. The big political chiefs of the Communist Party of China will then discuss economic policy. The market is expecting more stimulus.

The pandemic has hurt China’s reputation among the populous and in political circles.

Not so in the market. Foreign investors are still interest in China. Water cooler chatter on Wall Street and in Shanghai, for years, has been about wondering which U.S. company will be the first to list shares in Shanghai. Some predict Disney DIS will create a Disney Asia division and list there, seeing how Beijing bans nearly all its locals from owning Disney stock here.

Others think it will be Nike NKE , a long bellwether brand for Chinese NBA fans. And a long-time manufacturer in China. Everyone believes it will be an American brand that makes the move first, though Russian companies have listed on Hong Kong. No non-Chinese firms are listed in Shanghai.

Despite the crisis and bad PR for China, “No one is pooling their money out of China and saying no ‘let’s not do that anymore’,” Thomas says.

On May 12, in a letter to BlackRock BLK Chairman and CEO Larry Fink, the National Legal and Policy Center asked them to divest from the 137 Chinese companies currently listed on American stock exchanges. Of the 137, 11 are at least 30% owned by the Chinese government and all are “under the influence and ultimate control of the Communist Party of China,” the Center said in a press release.

BlackRock recently divested itself of certain companies that produce thermal coal in response to demands by anti-fossil fuel activists and in an effort to shore up their ESG street cred.

In the letter, NLPC Chairman Peter Flaherty cites this as “precedent” and argues that Chinese companies “that manufacture equipment for (China’s) surveillance state or that are dominated by the People’s Liberation Army raise even bigger ethical questions.”