Breaking
Everything You Need to Know About Corporate Social...
Is Adaptive Leadership the Key to Motivating Employees?
Why business events are set to return with...
Business events set to return with a bang!
Expanding Internationally: 5 Things to Consider for eCommerce...
How the Machine Shop Is Going Digital in...
Sustainable Food Packaging Is Helping the Hospitality Sector...
Top 5 Investment Practices To Make More Money...
Managing IT Requirements for SMEs: 5 Aspects that...
How To Build a Successful Luxury Brand In...
Finding The Best Google AdWords Consultant for Your...
8 Top Tips To Help Your Agricultural Business...
Three Reasons Why Office Décor and Design Are...
Looking To Improve Efficiency In Your Business? Here’s...
AI and machine learning for business
How Social Media Changed the World
Home Business In Times Of Financial Crisis, Will FC Barcelona Finally Turn To Their La Masia Academy?
Business

In Times Of Financial Crisis, Will FC Barcelona Finally Turn To Their La Masia Academy? 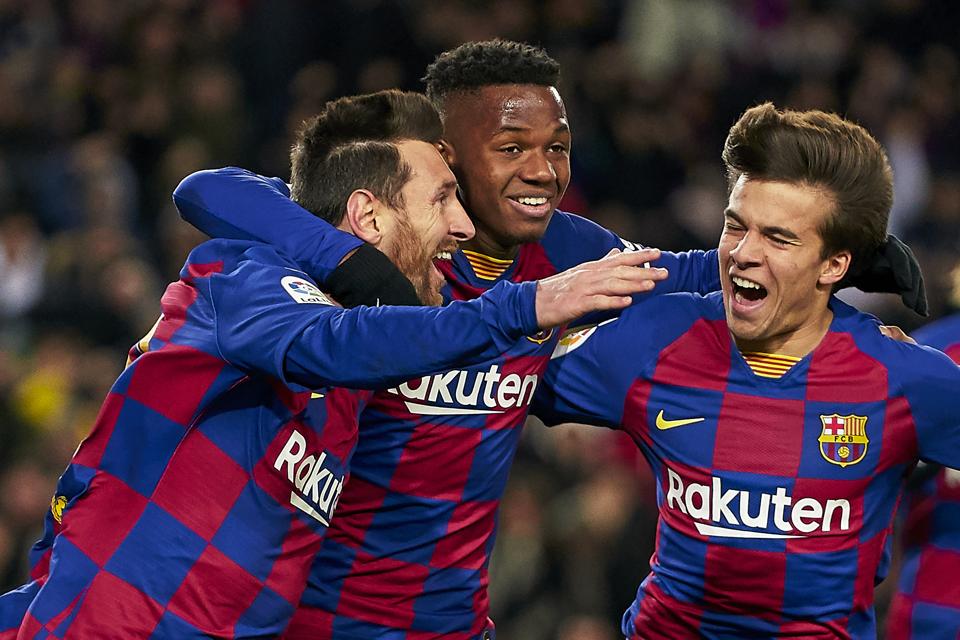 BARCELONA, SPAIN – JANUARY 19: Lionel Messi of Barcelona celebrates after scoring his team’s first … [+] goal with his teammates Ansu Fati and Riqui Puig during the Liga match between FC Barcelona and Granada CF at Camp Nou on January 19, 2020 in Barcelona, Spain. (Photo by Quality Sport Images/Getty Images)

As has been news for a week now, ever since president Josep Bartomeu addressed the matter to local media, FC Barcelona will not smash their revenue record this year owing to the impact of COVID-19.

TV and box office money no longer forthcoming while La Liga and Champions League matches have been postponed, the club has had to ask the players of its sports teams to take pay cuts and must now rethink its summer soccer transfer plan.

Neymar and Lautaro Martinez were previously cited as certs to land, but, at a roughly combined $300mn, only one may now rock up at the Camp Nou for the 2020/2021 campaign and as part of a player-plus-cash swap deal at that.

Will this predicament finally force the Catalans to look inwards at the fruits of their La Masia academy, then? 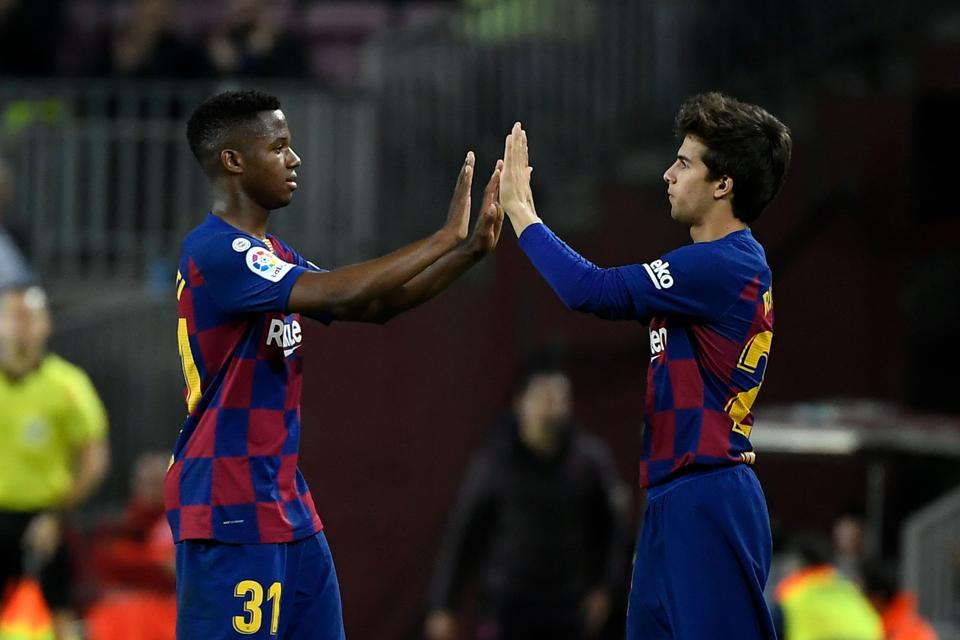 In the aftermath of the Blaugrana’s 2-1 UCL win over Inter Milan in December, a first ever at the San Siro, official social media accounts were awash with talk of “Made in La Masia” given that two of its products in Carles Perez and Ansu Fati, iconically pictured together, had scored the goals.

Ernesto Valverde, the coach that had given Fati his break with the seniors at just 16, the promotion was out of necessity considering knocks to Luis Suarez and Lionel Messi while the Inter clash was a dead rubber with Barça’s progression to the last 16 already guaranteed.

Under Quique Setien, who dramatically took over the reins when Valverde was fired at the turn of 2020, younger players were meant to be afforded more opportunities with the previously frozen-out Riqui Puig about to have his moment.

During the new manager’s debut, against Granada on a windy night in the Catalan capital, it was late substitute Puig who robbed the ball on the left flank then started the move that resulted in Arturo Vidal backheeling for Messi to slot home the winner.

Another photo of the Ballon d’Or winner embracing Puig and Fati was fawned over as a passing of the baton from one La Masia generation to the next. And while Puig was given the nod against Ibiza in the Copa del Rey the following fixture, such trust has never been granted to him since after failing to impress.

Furthermore, just over a week later, Perez was told he was surplus to requirements by Setien and should seek pastures new when also poorly performing on the Balearic isle.

His former charge sold to Roma, Setien has admitted this may have been an oversight owing to injuries subsequently suffered by Ousmane Dembele and Luis Suarez. These developments left him short-staffed across the front line, and though a return to play tipped for the end of May or early June may see the pair swiftly back in the fold, what happens in later transfer windows is still undetermined.

Ivan Rakitic and Arturo Vidal likely to be moved on, Puig and Real Betis loanee Carles Alena must kick on soon but also be granted minutes if the club doesn’t want to lose them on frees when their contracts expire in 2021 and 2022 respectively.

Writers in the mold of AS’ Juan Jiminez quipping that La Masia offers Barça “anti-crisis hope”, there is also Alex Collado – another midfielder who took Puig’s place in the first team squad recently – from the class of ‘99 and plus Ronald Araujo, Jorge Cuenca and Monchu that can also be tested out.

Elsewhere, in alternative age groups, Konrad de la Fuente is a talented winger, and there is excitement over Arnau Tenas becoming the first homegrown ‘keeper since Victor Valdes to man the sticks in a post-Ter Stegen era.

Born over the border to Fati’s Guinea-Bissau, in neighboring Guinea, Ilaix Moriba is a physically and technically gifted midfielder compared to Paul Pogba, yet both youngsters have been naturalized to represent Spain’s youth categories in prep work for the national team’s future.

“People talk about the academy, but sometimes they prefer to spend millions and don’t have patience with young players,” scorned a hard-done-to Perez upon arrival in the Italian capital.

Yet with a bunch of prodigies about to come of age in times of financial hardship, FCB may have to do more than merely talk the talk on this occasion.

Government Action And Vested Interests Will Determine Where Best To Invest