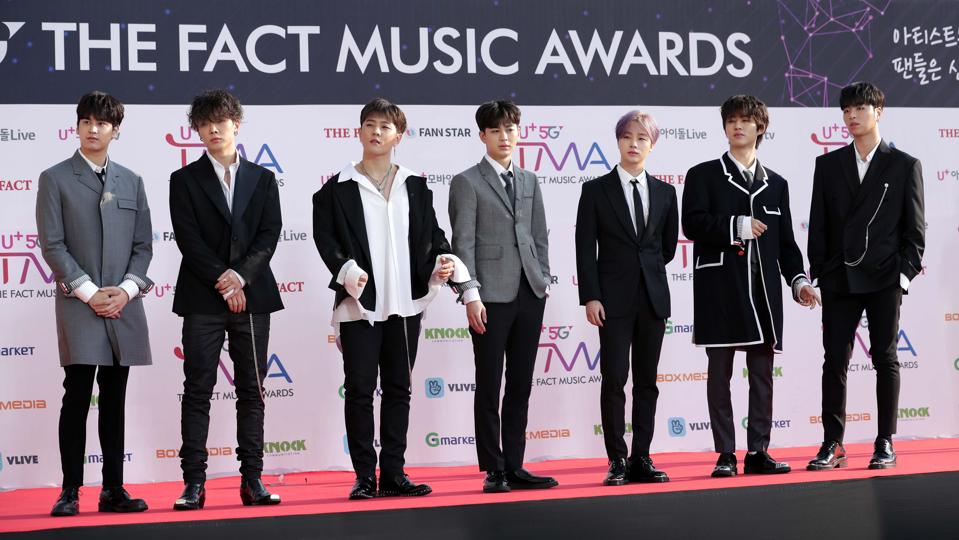 INCHEON, SOUTH KOREA – APRIL 24: Members of boy band iKON attends the photocall for U Plus 5G ‘The … [+] Fact Music Awards’ on April 24, 2019 in Incheon, South Korea. (Photo by Han Myung-Gu/WireImage)

K-pop music label YG Entertainment made a shocking announcement in the industry when it revealed that that their boy band iKON’s new album will include contributions from a member previously ousted from the group.

iKON is preparing to release their upcoming EP titled I Decide which will mark their first new music in more than a year since the single “I’m OK” as part of their compilation album The New Kids featuring hits from 2017 through 2019. A year is a lengthy wait in the quickly moving K-pop scene and comes after the band had hit new career heights with their humongous Korean hit “Love Scenario” in 2018 but found itself in controversy when the band’s leader and main producer/songwriter B.I was belatedly revealed in June 2019 by a local outlet to have attempted to purchase marijuana and LSD three years prior. The news lead to his contract with YG Entertainment to be terminated and seemingly marking the end of his career with the company who recruited him for training in 2011.

From suggestive song lyrics to actual drug use, fans and executives alike hardly bat an eye at drugs in any capacity in the western music industry—even less so at just the thought of taking drugs—but South Korea’s society is much more conservative at large where marijuana still remains an illegal substance. A follow-up story said his company had allegedly attempted to illegally cover up the charges when they first surfaced in 2016. Despite sharing that he never actually took any drugs and he was going through a mentally tough time, B.I’s negative local attention led to be edited from TV shows he was a part of and, ultimately, announcing his departure from iKON on Instagram. Later, an unconfirmed report indicated that he was forced out by his company instead of his own decision like his social-media post made it seem.

iKON has shared their intention to continue with the remaining six members after B.I’s departure, but the group has mostly been quiet since the changes despite a typically packed schedule of releasing multiple singles and albums a year. A major part of this is likely is attributed to B.I’s heavy involvement in iKON’s music as a producer and songwriter in all of the group’s releases to date. The upcoming album will apparently be no different even with a mixed response from fans.

On Jan. 28, YG Entertainment shared that I Decide will include new songs that featured contributions from B.I in a long letter on social media. YG said the contents of this album were actually recorded in early 2019 with plans to be released the middle of the year, but “due to the sudden departure of B.I, who was the team’s leader and producer, in the middle of last year, the release of their new music was postponed indefinitely” (according to translations posted by Soompi). The company shared they considered removing all songs B.I was a part of, but felt that would make an even longer period of inactivity for iKON. They also considered cutting all rap parts and melodies B.I had a hand in making, but worried it would complicate the songs since they were joint works done alongside other contributors. Instead, the company decided to use the songs after discussing with the iKON members but “with adjustments.”

The move is rather unprecedented in K-pop where most companies would opt to scrap a release or at least re-record it if a member left the group, especially under controversial circumstances. A recent notable examples include when Girls’ Generation re-recorded and re-filmed the single and music video to 2015 single “Catch Me If You Can” when member Jessica Jung abruptly exited the group in 2014. The music video featuring the former member later leaked showing the extents Girls’ Generation’s label SM Entertainment went through to push forward with their new lineup including returning to the same set, bringing the same costumes and styling, while creating a new version of the song and its accompanying choreography while down one member. More recently, boy band Stray Kids had member Woojin unexpectedly leave the group late last year. Despite recording a music video for their buzz single “Astronaut” with him, the visual was heavily edited to ensure no cuts of the departed singer were featured (though nine bodies were seen at times) and the song was re-recorded.

The international fan response to the B.I news seems to be mixed, as seen when I asked my Twitter followers made up mainly of international, English-speaking K-pop fans. The top responses from nearly 500 replies at press time presented blends of confusion (as to why B.I’s work was being used but he removed), worried (such as what happened legally for YG to use the songs), joy (that the group will get to continue performing B.I music and he’s a part of K-pop in some capacity) as well as calls for him to be reinstated into iKON.

There are still many questions to be answered about how this happened, but for now there’s at least acknowledgement of B.I’s strength as a producer, songwriter and artist as well as his core role in iKON.

I Decide will be released on February 6. Watch another trailer for the upcoming EP below: