Income Inequality And Investing Are About To Run Into Each Other 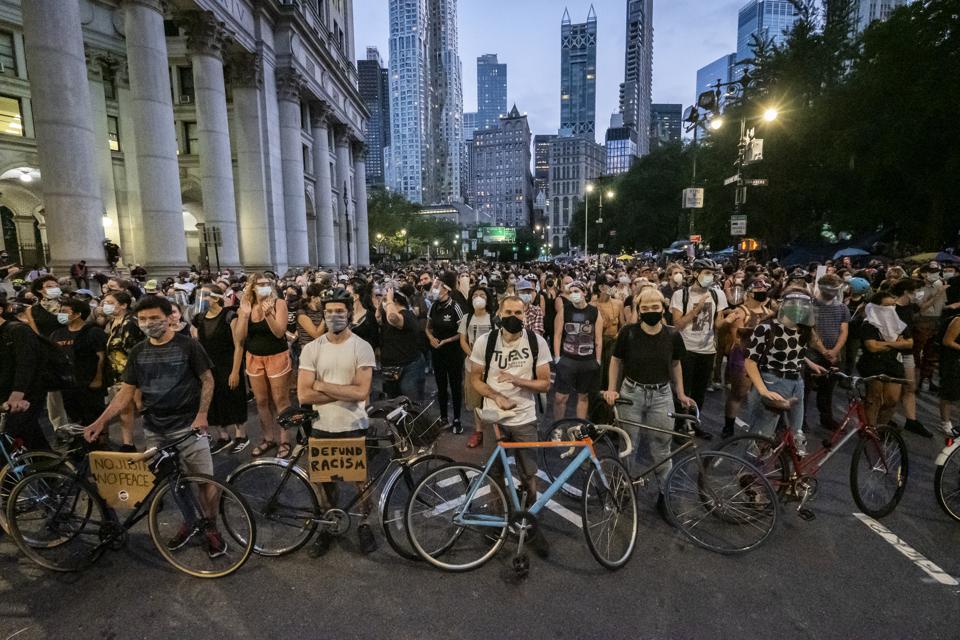 MANHATTAN, NY – JUNE 30: Protesters barricade the street with bikes and hundreds of people at City … [+] Hall, Manhattan. Earlier in the day, one of the members of Warriors in the Garden was beaten and arrested by police. This was part of the Occupy City Hall effort which has seen protesters camping out for days until today where New York City Council is to vote on the NYPD Budget. Protesters continue taking to the streets across America and around the world after the killing of George Floyd at the hands of a white police officer Derek Chauvin that was kneeling on his neck during for eight minutes, was caught on video and went viral. During his arrest as Floyd pleaded, “I Can’t Breathe”. The protest are attempting to give a voice to the need for human rights for African American’s and to stop police brutality against people of color. They are also protesting deep-seated racism in America. Many people were wearing masks and observing social distancing due to the coronavirus pandemic. Photographed in the Manhattan Borough of New York on June 30, 2020, USA. (Photo by Ira L. Black/Corbis via Getty Images)

Typically, investors—particularly the 10% of the population that owns 84% of the value of stocks, according to an analysis by NYU economist Edward N. Wolff—and the economically disadvantaged exist in different circles. Rarely would you see a sophisticate request an extra-dry martini, stirred, not shaken at a rent party.

But unusual times make strange bedfellows of the disparate. Particularly when both may become desperate.

Stocks have regained much of what they had lost based on the investors’ assumption that business would return to normal and consumer spending could return. But is this realistic or wishful thought?

New research from marketing analysts suggest that consumers are more hopeful—a “desire for future change”—than optimistic, which would be an expectation that days to come will be better.

For some, the hope may come true. But for millions, it won’t. Look at the cheers over the increase in jobs, which is good news in one sense. At the same time, as Steven Blitz, chief US economist at TS Lombard noted in some research the company emailed, while headline employment has quickly dropped, “the number of permanent job losses continue to climb steadily. The permanent number, in fact, has risen into recession territory and will continue to rise as summer moves on.”

Even at “only” 11.1%—a number calculated before spiked in Covid-19 cases convinced even reluctant governors that maybe, just maybe, opening businesses as though all were well was not the smartest move—the unemployment rate is significantly worse than the depth of the Great Recession and could again move upward. Looking at ongoing unemployment insurance data from the Department of Labor, at the end of the week of June 6, there were 20.2 million people receiving unemployment.

It took a good ten years for things to start healing in a broader sense after the 2007 through 2009 massive recession, the worst since the Great Depression. Today, even with the rebounds in sentiment among manufacturing professionals, suggesting an improvement in demand for goods, the economy still needs people to purchase. Not just those at the top, but throughout the entirety of society, because everything depends on volume.

Evictions are on rise in places like Milwaukee county, Minneapolis-St. Paul nursing homes, and Virginia. Federal eviction moratoriums are over July 25.

Health insurance for twisted historical and political reasons remains tied to jobs. When people lose work, health protection is also gone. Back in mid-May, the Economic Policy Institute estimated that 16.2 million workers had lost employer-provided health insurance. That was before the full extent of job losses would be known.

Loan accounts in hardship status increased “significantly” over the last two months, according to TransUnion TRU . That was true across all loan categories and categories of consumer credit, although the biggest increases were in auto and unsecured personal loans. In mortgages, 0.279% of accounts were in hardship in May 2019. As of May 2020, it was 6.153%.

Many people are on the financial edge, or have slid past it, because the individual Covid-19 “stimulus” money was really rescue funds</a>. Those were never sufficient and are quickly running out.</p>

<p>The broader future is scary according to the data. This is exactly where income inequality meets investing.</p>

<p>For years, one of the main forces pushing up stock prices has been low interest rates as set by central erbanks, including the Federal Reserve. Plenty of money has needed to find a home. Given the levels of government bonds, equities have benefited. As more money chases shares, demand drive up prices and returns on investment.</p>

<p>Only, that can’t go on forever. Volatility remains high in shares. There isn’t enough organically positive economic news to keep things afloat. Then there are the <a href=”https://www.forbes.com/sites/eriksherman/2020/06/15/us-china-hong-kong-hang-seng-investors/” target=”_blank”>developments in China</a> and its relations with the U.S., which could send markets trembling.</p>

<p>The fate of investors and of the broad reach of the real person economy are beginning to move closer together. But while those in the former don’t necessarily need the latter, the opposite eventually cannot be true. Let’s hope that ordinary people receive the help they need so that, eventually, the country, and world, can rebuild and prepare themselves for the next bout of disaster, this time before it happens.</p>

Stocks Are Rallying Too Much On Vaccine News, Says This Market Expert

Why Risk Management Will Not Produce The Best...