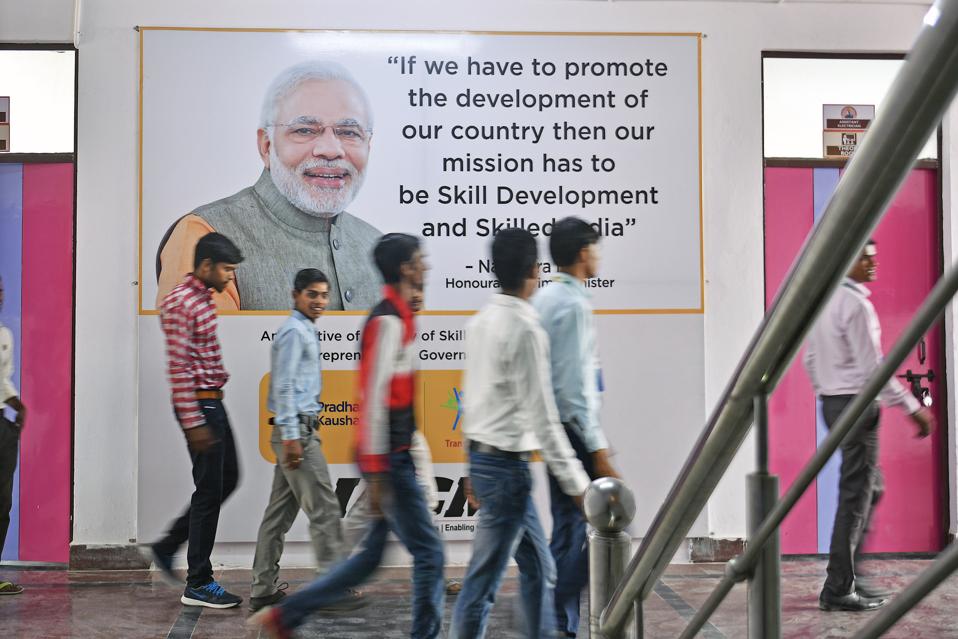 Students walk past a poster featuring a photograph of India’s Prime Minister Narendra Modi at an … [+] IACM Smart Learn Ltd. learning center in New Delhi, India, on Tuesday, Oct. 10, 2017. By 2026, 64 percent of Indians are expected to be in the working age group of 15-59 years, making it home to the largest workforce in the world. Yet the government’s much-touted goal of providing skills training to 400 million people by 2022 is unlikely to be met, increasing the already significant unemployment burden in a country where 69 percent of jobs are under threat from automation. Photographer: Anindito Mukherjee/Bloomberg

Then there’s the unemployment rate, which reached an all-time high of 8.50 in October.

These are dismal numbers for a large emerging market economy, which was growing at brisk rates a couple of years ago.

Still, there is one bright spot: the equity market, which is rallying to new highs. 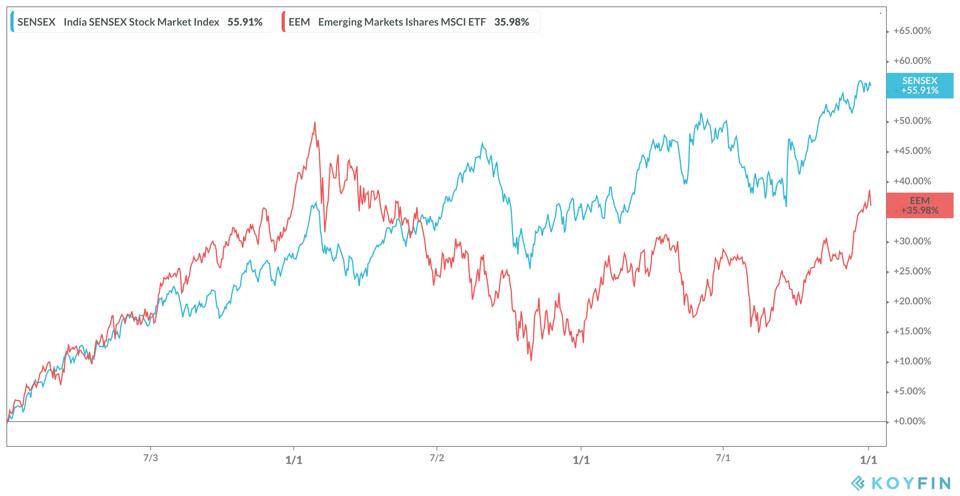 But that won’t last long if the economy continues to falter. Listed firms are part of the economy, and their shares will eventually follow its pace.

That’s according to a recent working paper from the Center for International Development at Harvard University, titled “India’s Great Slowdown: What Happened? What’s the Way Out?”

It’s well-known what happens to an economy when a bubble bursts. “Consequently, consumption too has now sputtered, causing growth to collapse” add Subramanian and Felman. “As a result, India is now facing a Four Balance Sheet challenge—the original two sectors, plus NBFCs and real estate companies—and is trapped in an adverse interest-growth dynamic, in which risk aversion is leading to high-interest rates, depressing growth, and generating more risk aversion.”

What’s the Modi government been doing to avert the situation? Several things according to Udayan Roy, Professor of Economics at LIU Post. Like a large cut in the corporate tax, and the resumption of the Privatization of Public Sector Units.

Meanwhile, the Reserve Bank of India (RBI) has eased monetary policy by cutting its main interest rate by 135 basis points.

That’s one of the largest cuts in India’s history.

But these measures haven’t been working, due to a “credit crunch,” according to Roy.

“The monetary transmission mechanism has broken down,” he says. “Even though the RBI is trying to pump money into the economy, lending is not growing (because a business doesn’t want to borrow; there is no demand for loans because the prospects look uncertain). Investment is stagnant.”

And that makes the current situation strangely very similar to the US after the global financial crisis, according to his theory.

“After the global financial crisis of 2008-09 ended, Indian banks began giving loans liberally to infrastructure-building firms,” Roy explains. “These projects ended up unsuccessful and the infrastructure companies began to fail. They could not repay their loans. So, the banks cut back on lending. This began to hurt investment and exports.”

What’s the solution? “The government will have to find a way to make the banks and the NBFCs less afraid to lend,” he says. “That’s the only way out.”

This means that Prime Minister Modi has a hard job ahead in his second term.

Pier 1 Sinking Half Its Stores; Is Bankruptcy Next?