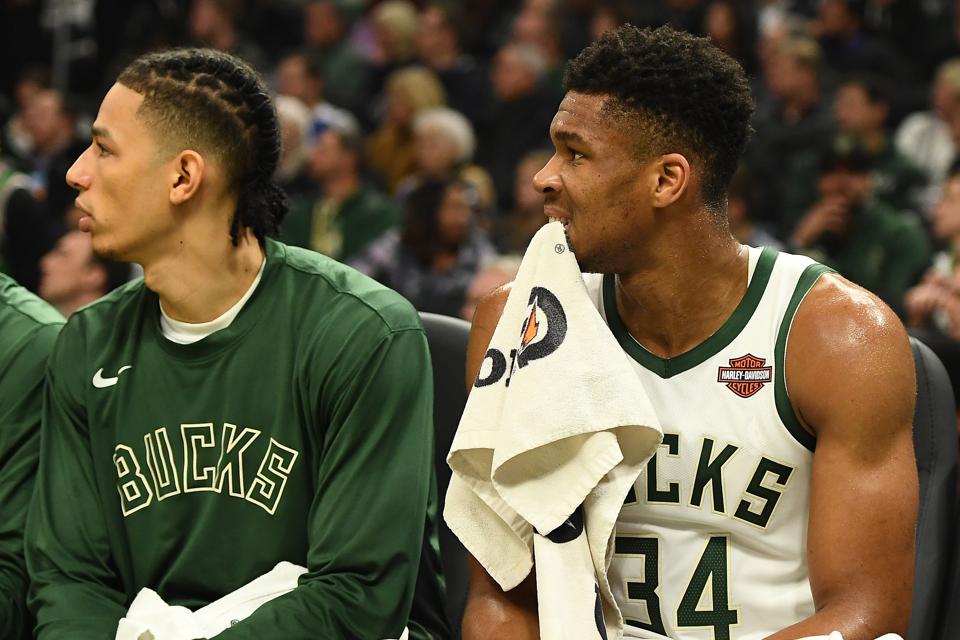 MILWAUKEE, WISCONSIN – OCTOBER 28: D.J. Wilson #5 and Giannis Antetokounmpo #34 of the Milwaukee … [+] Bucks wait on the bench during a game against the Cleveland Cavaliers at Fiserv Forum on October 28, 2019 in Milwaukee, Wisconsin. NOTE TO USER: User expressly acknowledges and agrees that, by downloading and or using this photograph, User is consenting to the terms and conditions of the Getty Images License Agreement. (Photo by Stacy Revere/Getty Images)

As the Milwaukee Bucks enjoy their All-Star break with the NBA’s best record and a super-comfy lead in the Eastern Conference, let’s grade their individual performances up to this point. Playing-time percentages in parenthesis include missed games and are based on the amount of non-garbage time possessions according to Cleaning the Glass.

If it wasn’t for the decrease in minutes (partially because of the Bucks’ humungo leads and partially because of his erratic play), Eric Bledsoe would’ve had a much stronger case to make the All-Star game. He tweaked his shot which has helped him improve his three-point and free throw percentages from a year ago. Hopefully, it continues into the playoffs. He continues to attack the rim with reckless abandon (for better or worse), and is one of only three Bucks who can create their own shot on a consistent basis; that’s a huge plus.

His defense has dipped a bit from last season when he was an All-Defensive First Team member, but he’s still very good. He makes life difficult for any point guard the Bucks will see thanks to his blend of quickness, strength and wingspan. Grade: B

When Bledsoe is in a funk, George Hill is there to save the day. He’s one of the best backup point guards in the NBA and is as steady as they come. He’s shooting a white-hot 51.1 percent from downtown (looking like his postseason self), and can even attack the defense and throw one down in traffic when given a runway:

He missed the last seven games before the break with a hamstring issue, but Mike Budenholzer’s “general expectation” is that he’ll return on Thursday vs the Detroit Pistons. Hill’s positional versatility is a bonus, as he can even slide over to the two when playing alongside Bledsoe. When you add that to his already stellar defense, it’s a win-win. Grade: A

After his rookie campaign was derailed with injuries, Donte DiVincenzo has responded in full in his second season. He’s firmly entrenched in the rotation and even started 20 games when Khris Middleton and Bledsoe were hurt. He makes enough threes (34.4 percent) to be a mild threat and makes up for the rest with constant activity on offense. His outside stroke needs continued improvement if he wants to take on a larger role for the Bucks; as does his ball-handling given his struggles against any type of ball-pressure.

Playing the role of meance off the ball, he’s always jumping passing lanes. His anticipation level is off the charts, as he’s consistently one step ahead of the offense. His on-ball defense is adequate as well. Grade: B+

Stepping into the starting unit for the departed Malcolm Brogdon, Wesley Matthews has made many sacrifices for this team; he’s taken the fewest shot attempts per game and has the lowest usage percentage of his career. His three-point percentage is one point below his career average, but he makes enough to keep the defense somewhat honest.

His on-ball defense is his biggest contribution to this team, as he typically guards the opposing team’s best wing player and does a very nice job. He uses his physicality and basketball I.Q to make life difficult. This also allows Middleton to focus more on offense where he’s having a career year. Call it a domino effect. Grade: B

Similar to last season, Pat Connaughton has been in and out of Budenholzer’s rotation thanks to his inconsistent three-point shot once that has him only knocking down 31.8 percent of his threes—the second-lowest mark of his career. He works his tail off on offense, but it’s difficult to keep him on the court when he doesn’t space the floor for his teammates.

He also works hard defensively as well and nobody will ever say he doesn’t give enough effort; his defensive rebounding is definitely a plus. Still, he’s limited at this end of the court and can’t make up for his offensive deficiencies. Grade: C-

Kyle Korver was brought to Milwaukee for one reason and one reason only—to shoot the basketball, and that’s exactly what he’s done by making 40.7 percent of his threes. Still, that’s two points lower than his career average. His passing has also been a pleasant surprise. Although he doesn’t rack up huge assists, he understands his gravity and uses it to open up teammates when he has the ball.

He’s horrible defensively, but it’s not due to a lack of effort. He works hard, but he’s constantly out of place. He’s also overzealous, often reaching for steals or going for unnecessary double teams. Although it works for a few individual stats here and there it doesn’t help the team as a whole. Grade: C

It’s the same song and dance for Sterling Brown as his first two years in the league. He’s in and out of the rotation and can’t seem to find any consistency with his game. At times, he’s a steady defensive player who can defend multiple positions. This has helped him play some small-ball 4 when needed. Other times, he’s a ball-stopper and forcing shots into the heart of defenses. Grade: C-

Somehow, Khris Middleton continues to be one of the most underrated players in the game. Right when the attention begins to meet his skill level he keeps getting better. That’s the case this year where he’s enjoying a career-season when it comes to effective field goal percentage, three-point percentage, rebound percentage and assist percentage despite having a higher usage rate than ever before.

As previously mentioned, his defensive responsibilities are lower than maybe ever before thanks to Matthews. That doesn’t mean he can’t still lock someone down when he needs to, but he’s able to cruise on that end of the floor more often. Grade: A

Outside of one start on Greek Night, Thanasis Antetokounmpo hasn’t seen a lot of meaningful playing time, and, most nights he’s not even dressed. That hasn’t affected his energy both on and off the court where he constantly brings contagious passion. That was the biggest question surrounding Antetokounmpo coming into the season, as nobody expected him to be a contributor on the floor. Grade: C

Coming off his first MVP season, Giannis Antetokounmpo has somehow gotten even better. His efficiency has dipped a bit, but he’s diversified his shot portfolio; taking a career-high 4.9 threes per game, mixing in more fadeaways and step-backs and showing off a fade and hook shot from the post. This will be key, as defenses continue to load up on stopping him.

His attention and effort level hasn’t waned on defense either where he’s enjoying another Defensive Player of the Year type season. He continues to thrive in free safety mode for the defense, but can clamp up in on-ball situations as well. If all goes as planned, he could become just the third player to win MVP and DPOY in the same season. Grade: A+

Brook Lopez is one of the most difficult Bucks to grade this season. On one hand, he’s struggling mightily on offense, as his three-point percentage is the lowest its been since he started shooting with regularity from downtown three years ago. He’s a good post-up player, but does so fewer than two times per game since Milwaukee’s offense doesn’t predicate itself on throwing the ball down to the block.

On the other hand, he’s a stud defensive player for the second year in a row. The Bucks funnel everything into him and he sucks it all up at the rim—posting a career-high 8.4 percent block rate. He’s well-deserving of being in the conversation alongside Rudy Gobert for the All-Defensive First-Team and Defensive Player of the Year. Grade: B

Serving as the primary backup power forward, Ersan Ilyasova has quietly had a solid season. He’s been able to stretch the floor by knocking down 37.3 percent of his threes—his highest mark since the 2012-13 season. Outside of a catch-and-shoot opportunity or a putback off a missed shot, that’s about the only way he contributes on offense.

It’s also clear age has caught up to him, as he’s a step slower on defense. He’s seen a decrease in charges drawn this year and struggled with his individual defense heading into the break. Hopefully, he can rejuvenate himself following some time off. Grade: C+

Robin Lopez has been a solid, if unspectacular, addition to the team. He understands his role on offense and doesn’t try to do too much. He’s shooting below 30 percent from downtown, but that’s about what you’d expect from someone who has already nearly doubled the number of three-point attempts in his career. He’s also shown the ability to go down low and whirl around like the tasmanian devil in the paint before throwing up a righty hook.

The primary reason Milwaukee signed him in free agency was to ensure they have a seven-foot rim-protector on the court whenever they need one. Lopez has played his role to perfection and even helped make life difficult against Joel Embiid in their Christmas Day rematch. Grade: C

Stuck on the bench for almost a whole year now, D.J. Wilson has to be reaching his boiling point. He played well when filling in for injuries last season, but hasn’t earned those same opportunities this time around. His shot looks flat from all over the court and he lacks touch around the basket. He’s still extremely versatile defensively where he can adequately guard 4s and 5s, and switch onto guards as needed. Unfortunately, he appears buried deep on Budenholzer’s bench and there’s no saying when or if he’ll get another chance. Grade: D+

How To Maximize The Forgotten Tax Deduction: Medical Expenses