Breaking
Best Incentive To Get Vaccinated: Money, Messaging, Or...
Page Level Query Analysis at Scale with Google...
How A CIO Can Align IT With Business...
Blogger of the Month: Jo, Girl Eats World
6 Things Women In Business Know That Men...
How to Use First-Party Data for Ad Personalization
Pressing Reset—Putting A Fallen Unicorn Back On Its...
How We Went Viral: Promoting Content with Influencers,...
Blame Olympic Record Price Tag For Return To...
Apple iOS 14.5 Release: Should You Upgrade?
Why Gaming Gear Company Razer Launched A $50...
Technical SEO Implementations to Increase the Impact of...
30 Brilliant Ways to Market Your Eco-Friendly Shopify...
15 Tech Industry Leaders Share Overused (And Misused)...
How to Use Amazon Posts to Promote Your...
U.S. House Passes Bill To Create First Crypto...
Home Business Injuries Cost Dellin Betances A Long Career With The Yankees & The Mets Are Banking On His Past Dominance
Business 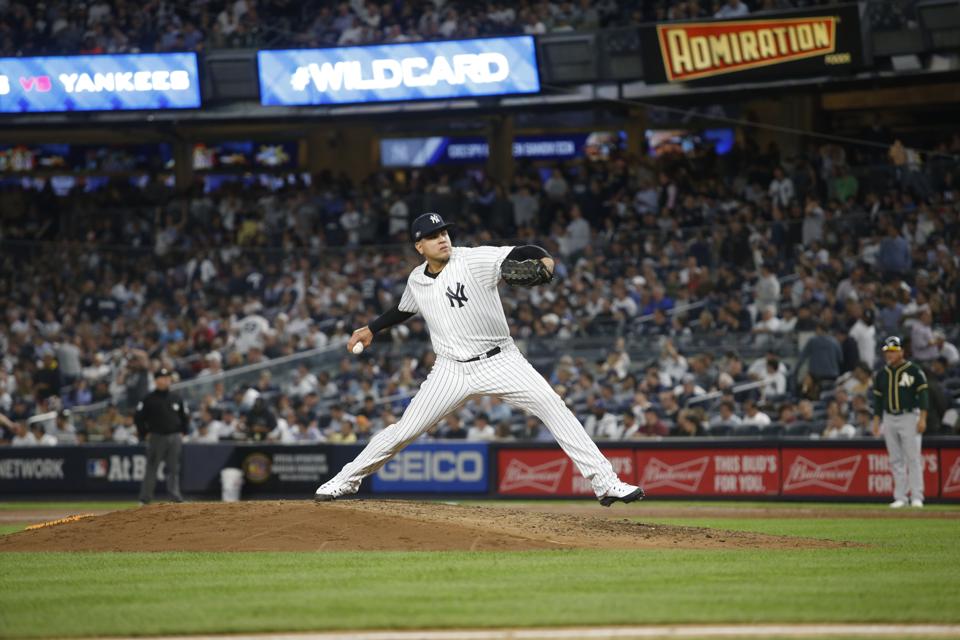 The expectations were high right after his first pro season when Dellin Betances was named by Baseball America as the third-best Yankees prospect following the 2006 season. This was just a few months after the Yankees drafted him as an eighth-round pick out of Brooklyn’s Grand Street Campus and gave him a $1 million signing bonus for him to forgo a commitment to Vanderbilt where he would have been a college teammate of David Price, Mike Minor and Pedro Alvarez.

Scroll further in Baseball America’s mention of the 2006 top Yankees prospects, Betances was projected by the publication to be the Yankees’ third starter in the 2010 season.

Between the time of his first pro season and by the time he became a dominant late-inning reliever in 2014, Betances was regarded as the seventh-best prospect entering 2008, back to No. 3 entering 2009 and not on any prospect list going into 2010 due to injuries. After the 2010 season, he was back to No. 3 following a impressive recovery and going into 2012 – following a brief cameo in 2011 in the Bronx – he was No. 3.

Things often don’t work out as projections or forecasts. Just ask some of the other prospects who have come and gone over the years for the Yankees such as the other members of the “Killer B’s – Manny Banuelos and Andrew Brackman but for Betances, with the exception of an injury-plagued 2019, they worked out well except as a standout reliever starting in the 2014 season and it what the Mets are banking on when they signed him to a one-year, $10.5 million on Tuesday.

Coming off some of those seasons, it was natural to think Betances would command the kind of contracts the Yankees gave to Adam Ottavino (three years, $27 million) or Zack Britton (three years, $39) or the contract David Robertson commanded (four years, $40 million) with the Chicago White Sox following the 2014 season when he successfully succeeded in the closer’s role after Mariano Rivera retired.

The Yankees are already well fortified in the bullpen and once the injuries hit it seemed unlikely Betances would be re-signed. It also seemed unlikely Betances would get similar money as Ottavino or Britton and that turned out accurate when terms of his contract were released, giving off the impression the Mets are proceeding with caution in assessing Betances’ value.

Before the injuries, Betances was a dominant reliever for five seasons and made the All-Star team in four straight seasons. He pitched to a miniscule 2.22 ERA with a dominant 14.6 strikeouts per nine innings even with the occasional struggles and the struggles in the 2017 postseason.

He was poised to get one of those bigger deals coming off the 2018 season when he fanned 115 in 66 2/3 innings with a 2.70 ERA. In those five seasons, he struck out 100 batters each time, appeared in no less than 66 games, never had an ERA under 3.08, never recorded a WHIP over 1.22 and never allowed more than seven homers despite pitching home games at Yankee Stadium.

All of those gaudy numbers came as he pitched 373 1/3 innings – the most amongst any reliever from 2014-2018. Those accolades and numbers to a crashing halt when his velocity was noticeably down during spring training and he was diagnosed with right shoulder impingement — the same injury that has sidelined Nets star Kyrie Irving since Nov. 14.

Then came more injuries as Betances also sustained a lat injury and positive news about his progress was slow to develop. He was activated from the injured list Sept. 15 when manager Aaron Boone said:

“Hopefully these couple final weeks of the season, he’ll get some significant outings and continue to get built up and be a big part of what we do moving forward in the month of October,”

And those comments never worked out as planned as Betances tore his Achilles’ by doing of all things celebrating getting his first two strikeouts of the season.

By the time the playoffs rolled around, Betances was in crutches cheering on his teammates against the Twins and Astros.

And two months later, the five years Betances produced as an All-Star reliever are the basis for a contract in New York – just with the Mets, who cited that in their press release.

“Dellin is one of the elite relievers in the game with an incredible track record of pitching on the biggest stage and in playoff games,” Mets Executive Vice President and General Manager Brodie Van Wagenen said in the press release. “This is a tremendously exciting gift for Mets fans this holiday season in our championship pursuit.”

It wasn’t long ago to think the Yankees might make similar statements upon re-signing Betances, at least those not named Randy Levine, who famously sparred with him in a contentious arbitration hearing in Feb. 2017 that ultimately paid the right-hander $3 million and not the requested $5 million. This came after Betances produced a third straight All-Star season while being paid $507,500 in 2016.

Ultimately the injuries cost Betances a chance to carve out a long and storied career as a Yankee. The reputation and experience gained from five dominant seasons helped him get a chance at bouncing back from a serious injury and one New York team was willing to keep the former New York City Public High School League star at home.