Breaking
Meet Onesimus, The Enslaved Man Who Saved Boston...
How to Build a Sales Forecast Model
The Unexpected Ways COVID-19 Has Forever Changed What...
Google Posts: Conversion Factor — Not Ranking Factor
How To Bring Your Branding To Life
Coinbase Cofounders And Investors Poised To Rake In...
How To Stay Top-of-Mind For Your Audience With...
Employers: Eight Red Flags You May Not Notice...
The benefits of videoing in the automotive industry
Ted Lasso, Other Apple TV+ Shows Arriving Soon...
How To Incorporate Click And Collect Into Your...
What Are Working Capital Loans and When Should...
The 10 Biggest Trends in Entrepreneurship to Look...
Clubhouse Has Grown 10X In Two Months. Here’s...
Here’s Why Tyson Foods Stock Looks Undervalued At...
How To Maintain Client Relationships During Long Projects
Home Business Inside ‘Little America’ On Apple TV+
Business

Inside ‘Little America’ On Apple TV+ 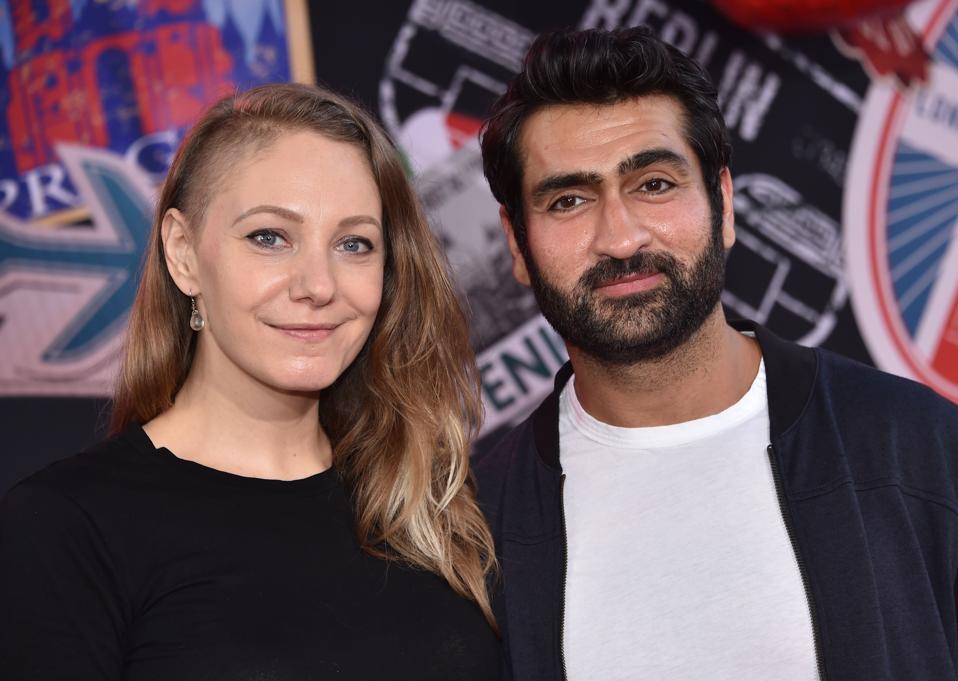 Kumail Nanjiani and Emily V. Gordon arrive for the ‘Spider-Man: Far From Home’ world premiere at the … [+] TCL Chinese theatre in Hollywood on June 26, 2019.

“We pitched to a bunch of different places, and the truth is some of these more traditional outlets that have been around for decades, were a little hesitant about the show,” explained Kumail Nanjiani.

Little America is an anthology series on Apple TV+ that’s he’s executive produced with his wife, Emily V. Gordon, as well as Lee Eisenberg, Alan Yang, and Joshuah Bearman, among others.

Nanjiani continued: “They were all stuck in their old ways. They were like, ‘Wait, you want to do a show that doesn’t have any stars, that has majority non-white leads on our very mainstream network?’ They were a little scared of a show that was an anthology show about immigrants coming to America. That’s how we pitched it to some traditional platforms, but they didn’t want to do it.”

“We went with Apple because they seemed extremely passionate about it and they said they would trust us, let us make the show we wanted to make, and they would support it. We wanted the show to be something that was going to be accessible to a lot of people.”

The eight-episode run, already renewed for a second series, is inspired by a number of true immigrant stories.

Apple TV+ is one of the most recent additions to the streaming market, but that was something co-executive producer Alan Yang had experience of.

“When we pitched another show I was involved in, Master of None, to Netflix, they were the new kid on the block. They had two shows. They had Orange Is the New Black and House of Cards, so when we decided to make the show for them, that was a leap of faith,” he recalled. “This was a similar thing where when we met with Apple, they hadn’t started making shows yet. What made it seem like a good fit for us was, firstly, their enthusiasm for the idea. When we pitched Little America to them in the room, they almost immediately started selling themselves to us and trying to convince us why they should have it. The tone and spirit of the show were very much in line with what they wanted on their service.”

Eisenberg added: “They immediately got what we’re going for. They didn’t say, ‘Well, where’s the kidnapping of the President’s daughter? We need a life or death situation like someone who needs a heart transplant!’ They understood that the stories were small, but the stories had heart and characters that you were rooting for at the center.”

“Apple is such a worldwide and multi-faceted brand. We’re doing a podcast to delve more into the stories and the music on the show. There’ll also be a playlist for every episode. We’re putting out a book too. Apple has an infrastructure that just felt like it would be able to touch all of the different pieces that we wanted.”

But where does Apple get a return on investment?

“You would have to ask Tim Cook,” laughed Eisenberg. “I think that with a streamer like Apple, I imagine that they’re trying to build a library and that if they keep putting out content that people are excited about, they’ll pay the money for the service, and they’ll continue to buy Apple products.” 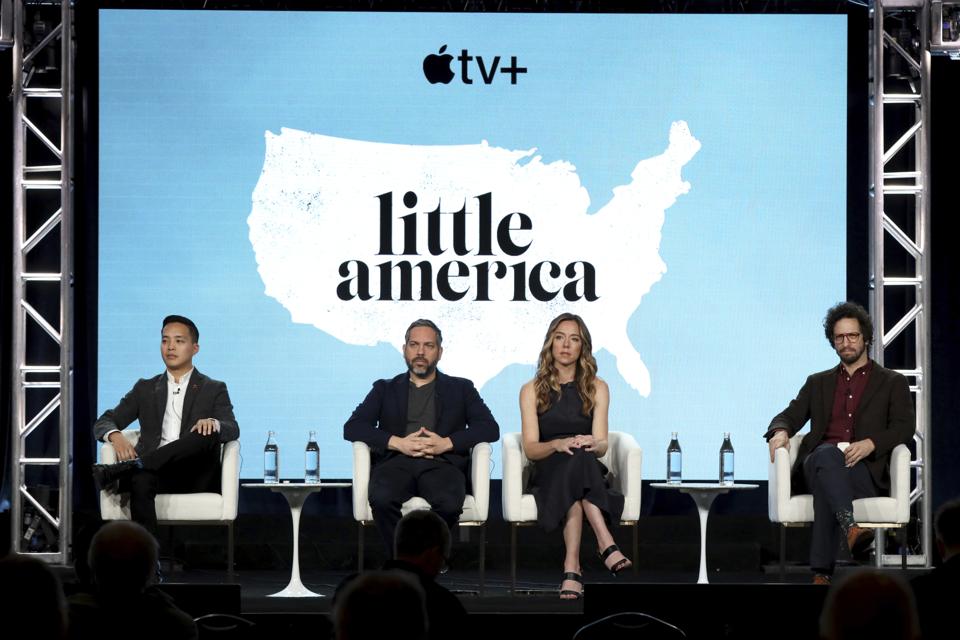 Immigrant stories and a return on investment are two things Nanjiani and Gordon are no strangers too. Their 2017 movie, The Big Sick, garnered not only well-deserved acclaim but also several awards, including an Oscar. Made for $5 million, it grossed $56 million worldwide and was one of the highest-grossing independent films of the year.

The Big Sick was loosely based on the real-life romance between Gordon and Nanjiani, an immigrant.

“This came our way about a year and a half, maybe two years ago, right after The Big Sick,” he explained. “There were a lot of TV shows that were pitched to us. Little America was the only one that we set out of all of them. It was because nothing quite like this had been done before.”

Gordon added: “We realized that we had a moment, which was wonderful, and wondered what we could do with it to add more cool stuff into the world and to do it right.”

“Josh Bearman and Arthur Spector at Epic magazine interviewed most, if not all, of the real people featured in Little America and had relationships with each of the subjects. With a few of them, we went back to them and asked for more details to add. All the subjects knew that we had the right to do whatever we wanted to do with the stories, but we wanted to make sure that we could get as many accurate details in there as we could.”

“That was the expertise we had, over anything else,” Nanjiani interjected. “We had done a story based on our life and had to get that balance right. There are some things that you don’t want to change, and then there are certain things that it feels okay to change if it sharpens the real stuff.”

The stories are told through a range of styles, involve a diverse cross-section of people, and use a diverse group of emerging talent. It’s something Bearman, part of the team at Epic who originally sourced the stories, also wanted to reflect accurately.

“A decade ago I was starting out in TV, but I can’t imagine this show being made then. It would be very challenging for a variety of reasons, including the format because an anthology show isn’t the easiest thing to do. Now, because there are so many platforms and new audiences, you can try different things,” he enthused. “Little America is a show where there are no known actors, and they are people from all over the world. We haven’t even mentioned the fact that a lot of the episodes are in other languages and subtitled.”

However, the road to authenticity wasn’t an easy one to travel. The show’s budget forced the team to get creative. For instance, in one episode, scenes set in Uganda were shot in New Jersey, and scenes in Syria were filmed in Montreal, Canada.

“There was a Syrian actor who we were flying in to be in the show, but because of the new immigration laws, we couldn’t film that episode in America. We had to move production to Canada for an episode,” Gordon explained.

Nanjiani added: “For an episode about someone coming to America, who came here with refugee status, we could not shoot it in the US, which was crazy. We couldn’t get a visa for him. We really liked him and really wanted him for the part, so, luckily, Apple was kind enough to allow us, at great expense, to move production to Canada for one episode.”

All of Little America’s executive producers agreed that the right time for the show is right now as it is riding a wave of storytelling that audiences are hungry for. Whether that’s on the big screen where it can make box office bank or subscription services tailored to the small screen, they’re glad that Hollywood has woken up and realized that all kinds of audiences want to hear all sorts of stories and that can make them money.

“We’ve needed it for a while,” affirmed Gordon. “I think Get Out was the last time I saw people going, ‘What a surprise that this movie is doing so well!’ People started realizing that movies or TV shows that are told from different perspectives and by diverse filmmakers can do well, and people want to see them.”

Get Out grossed $255.4 million at the worldwide box office against a $4.5 million budget.

“Most people seem interested to see stories from different perspectives even if they might think they only want to see ones about people just like them. They often end up realizing they’ve got more in common than they thought, and that’s awesome.”