Breaking
Seven Ways To Thrive As A Remote-First Team
Five Ways To Network In 2020
Deckers Outdoor Stock Still Attractive At $258?
Save $50 Off A Fitbit Sense With This...
Meet Jordan Wise & Hamish Stephenson: The Founders...
Google Plex: The Mobile Banking App Every Bank...
Future Of Intimacy: Sex Bots, Virtual Reality, And...
How to Create the Best Facebook Cover Photos...
How To Continue Working Remotely Even If Your...
Apple Dominates Microsoft In MacBook Pro Vs Surface...
Do You Know If You’re Prepared For Retirement?
Law Professor Argues Opportunity Zone Program Is Harmful
The Amazfit GTS 2 Mini May Be One...
Hotelier/ Billionaire Philanthropist Jonathan Tisch: What A Hospitality...
More Entrepreneurship, Less Recidivism Among The Formerly Incarcerated
Do S&P 500 Investors Really Want To Buy...
Home Technology Inside Ritual’s Katerina Schneider’s Plan To Build A Better Multivitamin
Technology 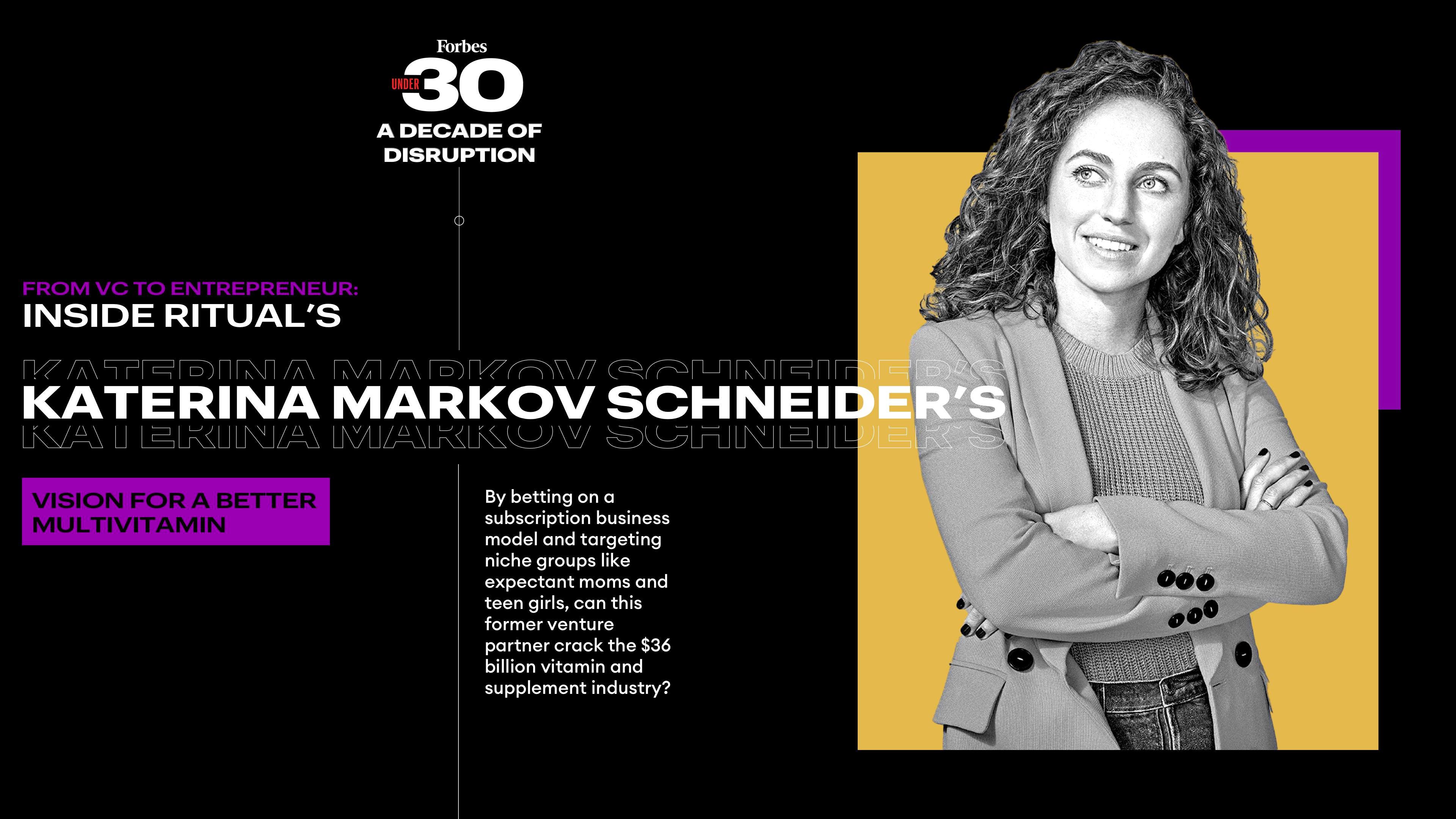 Katerina Markov Schneider is the sixth in our series highlighting 10 game-changers who have appeared in 10 years of Forbes 30 Under 30.

For as long as she can remember, Katerina Markov Schneider has surrounded herself with entrepreneurs. She was four when her family fled the former Soviet Union and moved into a Brooklyn welfare hotel, where her dad started over with his own financial software business. By 10, she was helping out and giving web site design advice “I always felt like maybe I would start something, I just didn’t know what it was,” she says.

In 2015, Schneider found her inspiration with online subscription vitamin supplements company, Ritual. It wasn’t an obvious time to launch a startup. As a venture partner at music mogul Troy Carter’s talent management and investment company Atom Factory, Schneider’s deal-making had just earned her a spot on the Forbes 30 Under 30 Venture Capital list. Her serial entrepreneur husband, Michael, had just launched his latest start-up, the now- defunct travel refund business Service. But pregnant with their first child, Schneider couldn’t find prenatal vitamins she trusted, between unclear ingredients and manufacturing processes. She knew she wasn’t the only one.

Even with her VC connections and others she’d forged in stints at Universal Music Group and Lehman, stepping across the table to the founder side was harder than Schneider anticipated. “As an investor, you kind of have the upper hand in most conversations,” she says. “As a founder, you’re always vulnerable, putting yourself out there every day, every moment.”

One source of strength for Los Angeles-based Ritual: science. From the startup’s early days, Schneider embraced data, hiring a team of staff scientists and conducting a 12-week, double-blind clinical study in partnership with Alabama’s Auburn University that saw “significant improvements” in blood levels of the vitamin’s primary ingredients versus a placebo, per Michael Roberts, Auburn’s lead researcher on the project.

Following the data – and making the sourcing of each ingredient available for customers to track – Schneider didn’t launch prenatal vitamins first after all. Starting with a multivitamin for adult women, she then expanded to men (subscriptions for both start at $30 per month). Business has boomed during Covid-19, with Ritual shipping one million bottles over the first half of 2020, up 75% from last year. A new bottle is shipped every 16 seconds today, Schneider says.

Spending on vitamins and supplements during the Covid-19 pandemic is up 16.7%

As for the prenatal vitamin: Doubters long gave “bad advice” that the market for such a product was too niche. When the product finally became available in August, it almost immediately sold out, racking up a waitlist of 20,000 expectant mothers.

Not that Schneider is resting on her laurels. In September, Ritual expanded to offer multivitamins for teens. And most recently, having just had her third child, Schneider launched another product for herself: a postnatal vitamin for new mothers. Thousands have already subscribed, while more than 700 people registered for an October virtual event featuring top researchers, doctors, founders–and, of course, Schneider herself.

Having raised $40 million from investors to date, Schneider say she does occasionally miss the chance to meet with the wide range of entrepreneurs that being an investor provided. But while she plans to mentor more founders moving forward, she’s glad she took the plunge. “The highs are a lot higher and the lows are a lot lower,” she says. “But I wouldn’t trade it for the world.”

Women In Finance Share Ways To Reinvent Your Business