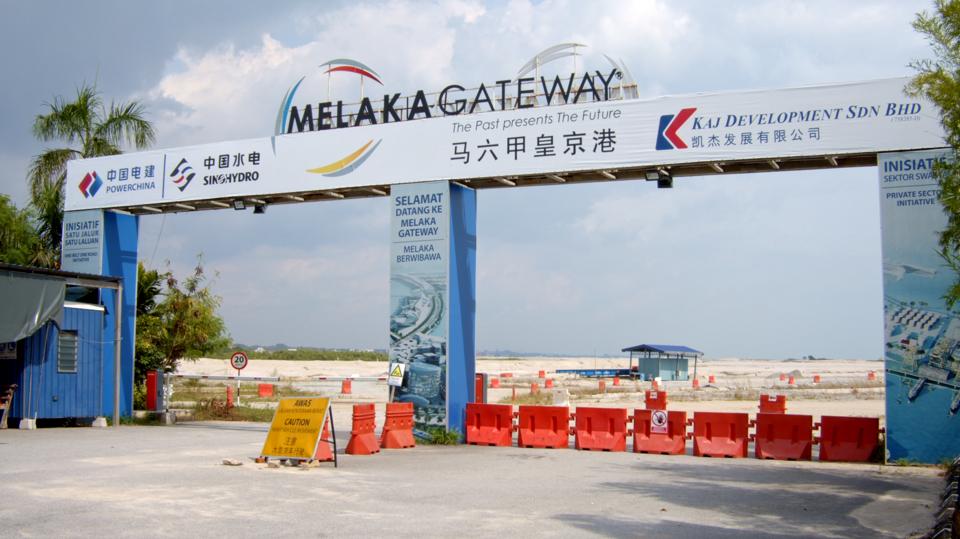 The gate to Melaka Gateway, which, after six years of development, is still a reclamation area.

“White elephants,” chuckled Martin Thesaria, a 62-year-old ethnic Portuguese fisherman and community leader, while pointing out to sea at the half-finished reclamation area that sat a few hundred meters before us. “Melaka is famous for its white elephants.”

What we were looking at was the stillborn carcass of another project of China’s Belt and Road Initiative (BRI) that has yet to live up to its billing. Melaka Gateway was supposed to have been the catalyst that would completely alter the face of Melaka and the southwest coast of peninsular Malaysia, transforming the region from a low-key epicenter of traditional cultures and traditions—a legitimate UNESCO World Heritage site—to a modern, booming, economic powerhouse. But the winds of economic fundamentals combined with political upheavals have left the project little more than a stagnant slab of reclaimed land.

Melaka Gateway was born on February 7, 2014 via a direct decree from then-Malaysian Prime Minister Najib Razak on the heels of a visit to China.

“With Melaka as the forefront flagship in support of the One Belt, One Road program initiated by the People’s Republic of China, we will soon taste the fruits of success, especially with the plans for infrastructure,” said China’s then-Minister of Transport, H.E. Yang Chuantang. “China is confident in Melaka Gateway’s project.” 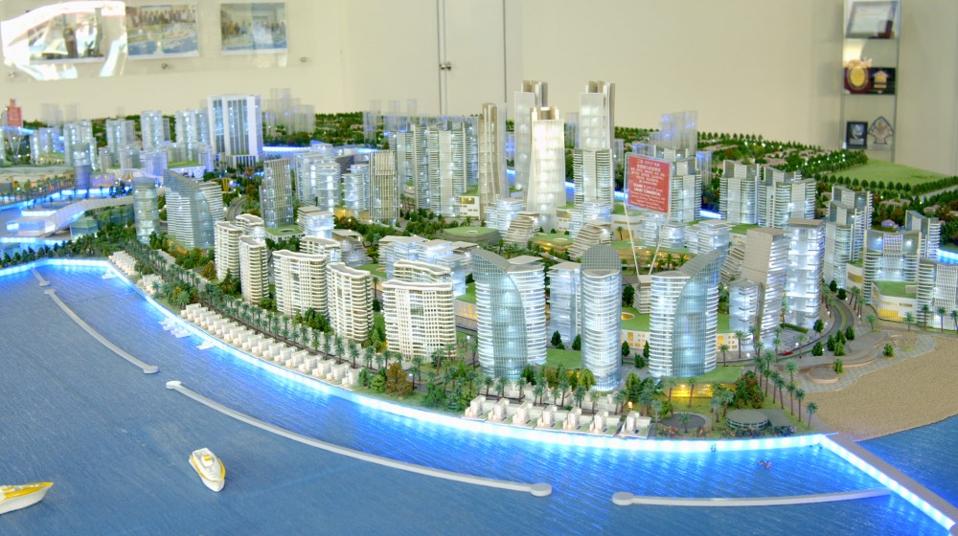 A scale render of what Melaka Gateway is supposed to become.

Melaka Gateway was to be one of the Belt and Road’s premier prizes: a 546-hectare, seaport-driven new urban area spanning four artificial islands strategically positioned in the Strait of Malacca. It was to be a place of glistening shopping malls, tourist resorts, luxury condos and theme parks. It was to have a glittering business district, a robust marina, a giant “Malaysia Eye” ferris wheel, the largest cruise ship terminal in Southeast Asia and a seven-star hotel. All of this would be built around a massive industrial port. Chinese Premier Li Keqiang even visited the project in 2015, giving it his stamp of approval.

By 2016, the Melaka Gateway dream was picking up momentum, as the Malaysian developer KAJ Development partnered with a trio of Chinese companies, including state-owned Chinese energy firm PowerChina, which pledged to back the project with a bankroll of $10.5 billion. This was during a time when Belt and Road deals in Malaysia were booming. Chinese investment had grown 119% year-on-year in 2016, and Melaka Gateway was to be joined by other massive BRI projects throughout the country, including the $13 billion East Coast Rail Link and the $100 billion Forest City project in Johor Bahru.

China’s interest in Melaka was straightforward: the bulk of the country’s trade—including 80% of its oil and gas—passes through the Strait of Malacca. Transportation there is traditionally dominated by Singapore, and the city-state generally aligns with U.S. foreign policy. In the event of a geopolitical upheaval, it wouldn’t be very difficult for China’s primary maritime lifeline to be severed. This has been a known issue for China since at least 2003, when then-President Hu Jintao dubbed it the “Malacca Dilemma” and made it one of China’s primary foreign policy concerns. By controlling access to multiple ports on Malaysia’s east and west coasts in tandem with the East Coast Rail Link, which was slated to connect them, would allow China to bypass Singapore and the Strait of Malacca completely, if need be.

For Malaysia, the prospect of attracting massive amounts of FDI, loans and the potential to bring in a larger share of the 100,000-plus vessels per year that ride right by its shores to Singapore on the busiest shipping lane in the world was too enticing to pass up. 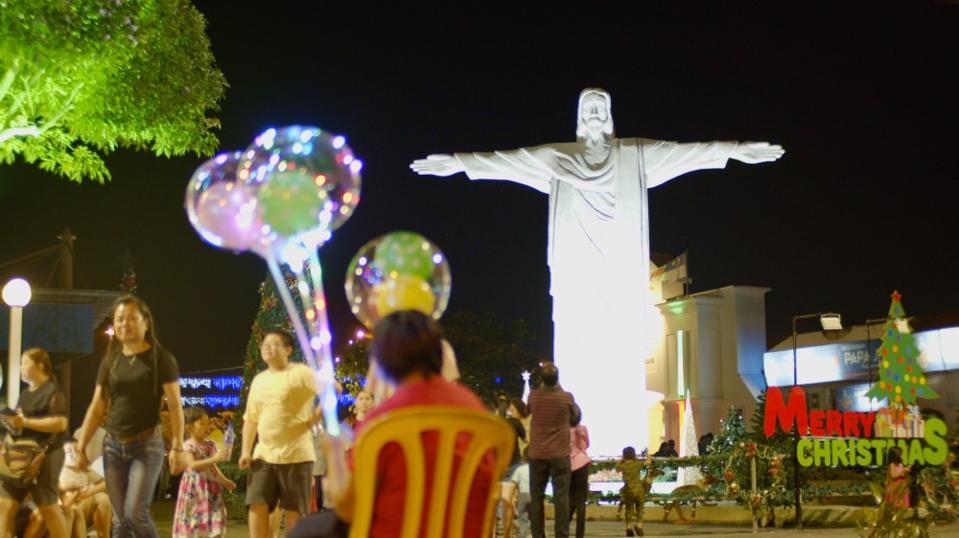 Portuguese Settlement during the Christmas holiday.

Just over the narrow strip of water separating Melaka Gateway from the coast sits a place called Portuguese Settlement. There is no equivalent for this place anywhere else in Malaysia—or the world. The people who live there are the direct descendants of the original Portuguese colonists that arrived in the 16th century. For hundreds of years they’ve subsisted as fishermen, craftsmen and cooks. They speak their own language—Papiah Kristang, a Portuguese creole that is mutually intelligible with modern Portuguese—they are Catholic, and they stand in stark contrast with the Chinese and Malay communities which have surrounded them for five centuries. 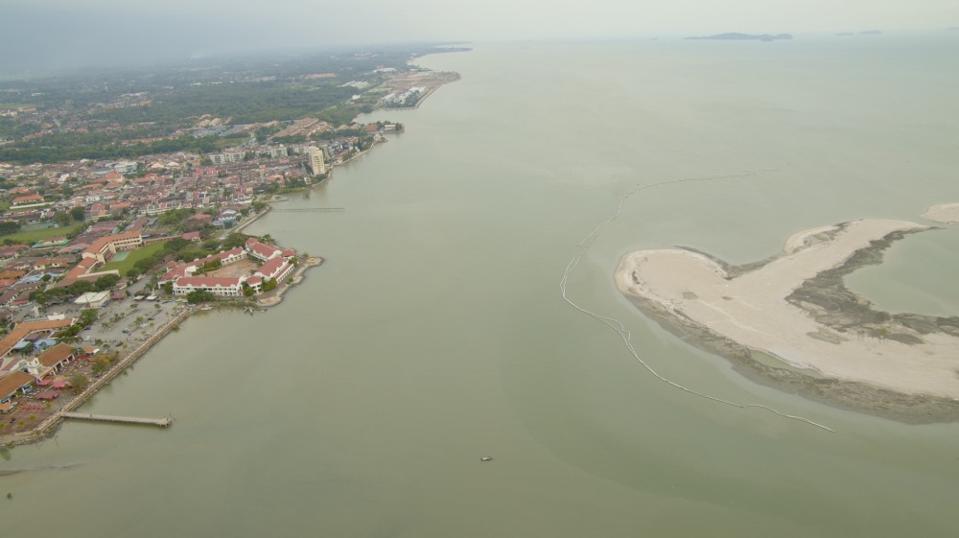 The close proximity of Melaka Gateway to Portuguese Settlement.

Despite the proximity, the people of Portuguese Settlement claim they were not consulted—or even notified—about the coming Melaka Gateway project.

“To be very truthful, we were in the dark about the Melaka Gateway project,” Thesaria recalled. “We only knew of the project when fishermen came back from fishing. They saw groups of people in tugboats planting flags in front of our shore. We didn’t understand what was going on. Then the next day, a few fishermen went out and saw these poles that were planted into the seabed having flags that said ‘Melaka Gateway.’ For us, it’s kind of like a shock. Suddenly, they are covering the sea.” 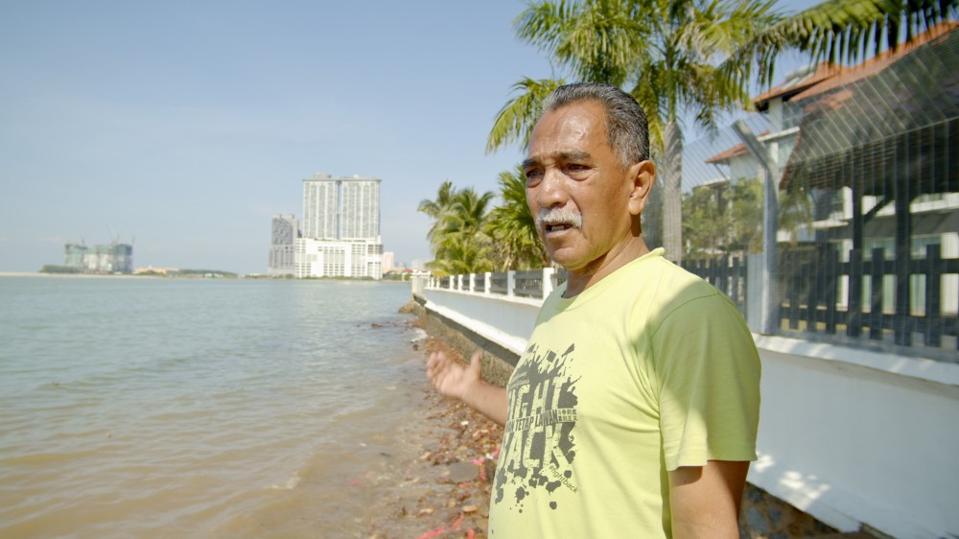 Land reclamation is nothing new in Malaysia. Like many other Asian countries, they have been adding on new land in bonanza-like proportions for new luxury developments and transportation projects since the 1970s, often with drastic environmental consequences.

“Once you reclaim, you lose the ecosystem,” said Jennie Lee, a marine biologist at Universiti Malaysia Terengganu. “The coral reef, the mangrove are the shoreline’s protector. So once you reclaim, you destroy the natural protection to the coastline and, over time, you will see the water current change and physical changes to the coastline itself: some beaches will have more sand piling up and some beaches will be eroded away.”

She explained that when you dump sand in the sea you invariably produce a lot of runoff and siltation, which increases the turbidity of the water, which limits the amount of light which can get through, which kills the phytoplankton and then has a chain reaction through the entire ecosystem, all the way up the food chain to human fishermen.

According to the local Portuguese, the deposition of foreign sediment has already ravaged the local fishing industry. Most of the fish that the fishermen used to catch near the shore have been extinguished, forcing the fishermen to go deep-sea fishing, which constitutes additional expenses and dangers.

“[Land reclamation] destroys the environment and the livelihood of the local people,” Lee continued. “When they lose access to the sea, they lose some of their normal routine. They can’t go fishing anymore.” 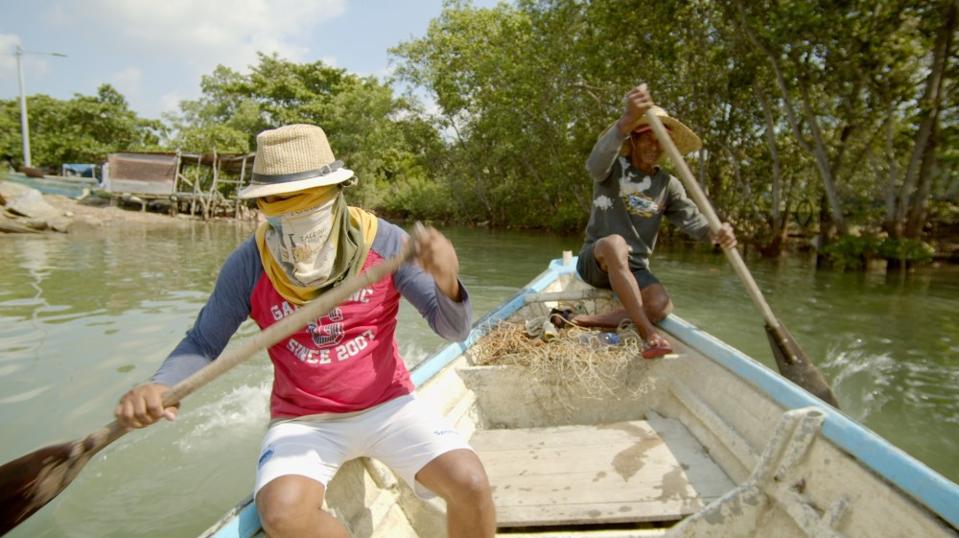 Fishermen in Portuguese Settlement who claim that fishing has gotten worse since the beginning of … [+] the Melaka Gateway project.

A local fisherman took me out in one of his boats to show me what the conditions were like around the project area. I watched as he caught more plastic bags than fish.

“A lot of rubbish all of the time,” he spoke with distain as he pulled a candy wrapper out of his net. “The reclamation spoils everything. This place once had a lot of fish. Now don’t have. Everything gone.”

He shook his head as he wrested another plastic bag from his net.

The Portuguese community has been protesting the Melaka Gateway project ever since they found out about it. In May 2018, 200 villagers participated in a demonstration outside of the KAJ Development’s office that featured the symbolic funerals of half a dozen fishermen laid out in caskets. KAJ Development did not respond to requests for comment for this article. 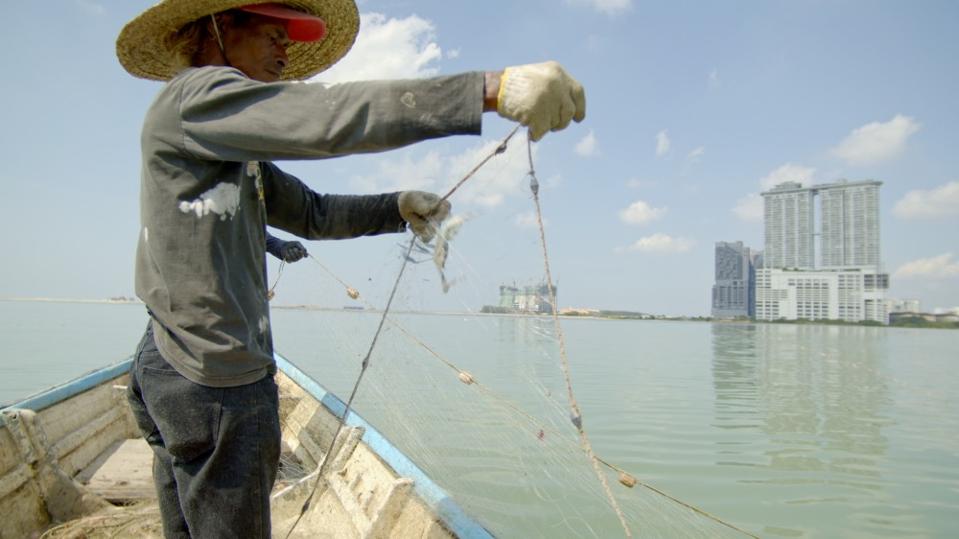 Portuguese fisherman with new development areas and Melaka Gateway in the background.

The economic viability of Melaka Gateway has been dubious from the beginning. Renown Malaysian economist Hoo Ke Ping didn’t mince words when he said that even if Melaka Gateway was built, it would be difficult for it to attract business, pointing out that Malaysia already has the still expanding Port Klang and Carey Island port project, which are bigger and more dynamic than what was planned for Melaka. On top of that, Malaysia’s top three ports are currently only running at 70% of their capacity, and the bottom line is that even if all of Malaysia’s current and prospective ports were combined, they couldn’t come close to rivaling Singapore’s Tuas Port, which is located a mere 200 kilometers away. The World Bank concurred. In a 2015 study, they found that a new port on Malaysia’s west coast simply wasn’t needed.

The strongest opponent of Melaka Gateway ended up being no other than Mahathir Mohamad, the 90-something-year-old former Malaysian prime minister, who called the shots in Malaysia from 1981 to 2003. Running on a coalition platform that criticized the incumbent administration of corruption—such as the conspicuous disappearance of billions of dollars from the 1Malaysia Development Berhad investment fund (1MDB)—and for their excessive Belt and Road dealings with China. It worked.

Upon coming to power in 2018, Mahathir immediately called to a halt of Malaysia’s Belt and Road projects so that they could be reevaluated and more favorable deals could be reached. In January 2019, Melaka Gateway was again green-lighted. The conditions of the re-instatement was that the project would need to be “local” and developed by local Malaysian companies. KAJ Development, the original Malaysian partner, fit the bill and the rest of the project’s partner portfolio was conspicuously unchanged—a fact that was not lost on the recently disposed prime minister.

“Najib said it is strange that the project, which is labelled as a ‘foreign sell-out’ when it was initiated during his premiership, is now hailed as ‘bringing back the golden age of the Melaka Sultanate’ without making any changes to the original project scope or shareholding,” reported Malaysian state-run news agency Bernama. 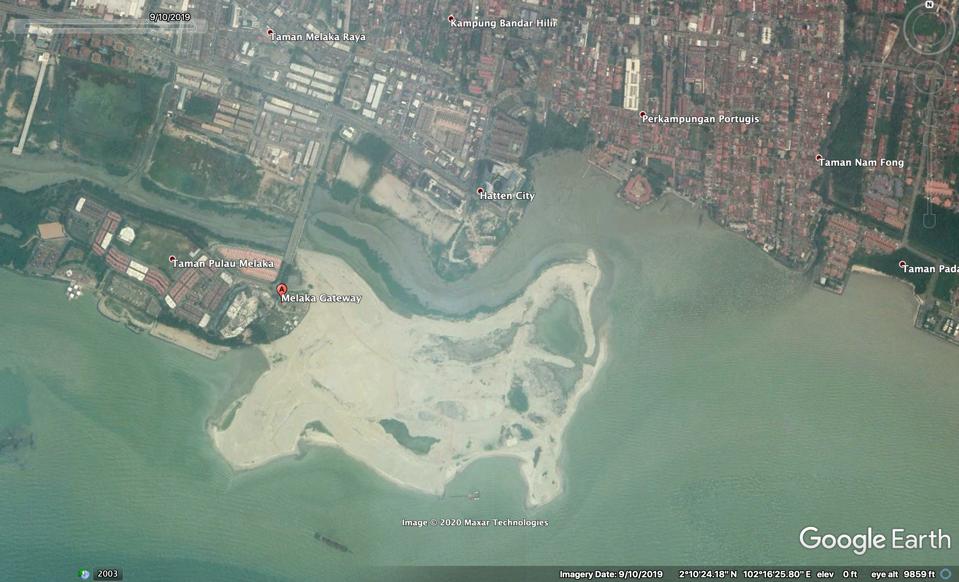 Melaka Gateway was initially slated to be opened by 2018 and finished by 2025, but by the beginning of 2020, though green-lighted, there is no sign of any activity. The project sits as an idle slab of reclaim land, doing little more than polluting the local ecosystem and obstructing the livelihoods of local villagers. The word around Portuguese Settlement is that the Chinese investors have pulled out of the project.

“All of these projects that have been initiated by the previous government have turned out to be unprofitable, unsustainable, not viable,” Thesaria exclaimed. “When you build something that there is no need for and the local population doesn’t make use of, it becomes a white elephant.”

A Mammoth Discovery In A Kentucky Cave- Shark Fossils!