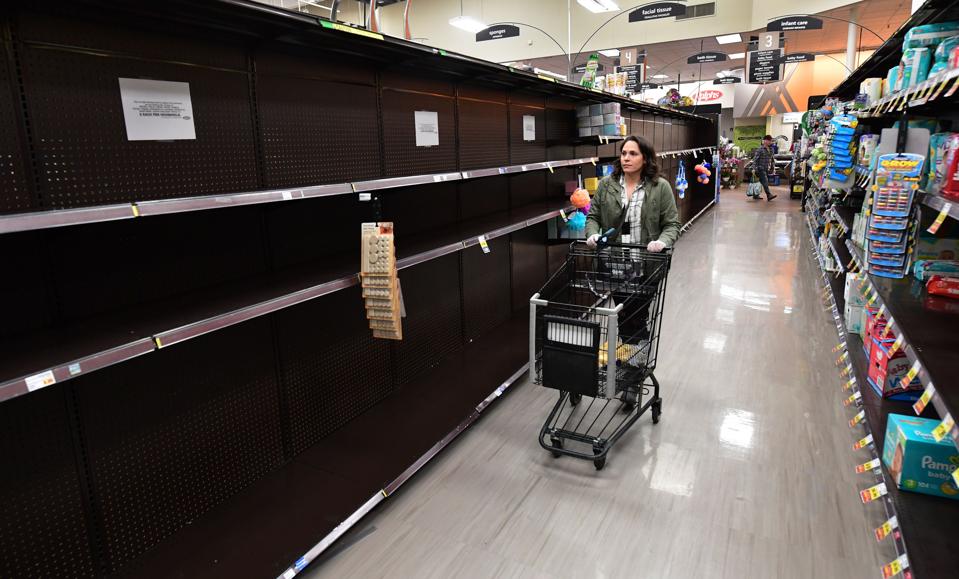 Instacart employee Monica Ortega walks past empty racks where items like toilet paper and napkins … [+] once filled while picking up groceries from a supermarket for delivery on March 19, 2020 in North Hollywood, California. (Photo by Frederic J. BROWN / AFP) (Photo by FREDERIC J. BROWN/AFP via Getty Images)

Topline: The contracted shoppers of Instacart, an online grocery delivery service (Costco, Aldi, CVS and many others) enjoying a huge demand amid the coronavirus, plan to walk off on Monday, March 30, to strike for specific demands during the Covid-19 coronavirus pandemic, including hazard pay and extended paid sick leave, according to a statement on Medium.

Crucial Quote: From the statement: “Instacart has turned this pandemic into a PR campaign, portraying itself the hero of families that are sheltered-in-place, isolated or quarantined…They are profiting astronomically off of us literally risking our lives, all while refusing to provide us with effective protection, meaningful pay and meaningful benefits.”

Key Background: The $2 trillion stimulus bill passed in both the Senate and House extends unemployment benefits to gig workers, who are particularly exposed to the virus. An Uber driver in Queens, NY, died Tuesday of the coronavirus two weeks after he stopped driving to avoid sickness, according to the New York Post. Uber has pushed back strongly to the assertion that it should treat its drivers as full employees. Yesterday, the U.S. surged ahead of China and Italy to lead the world in confirmed cases of the coronavirus with 92,932.

With A New PBS Documentary And A Third Michelin Star, The Inn At Little Washington Looks Toward The Future In These Troubled Times

This Is Why Some Galaxies Have A Green...

Why Everything Is Closing For Coronavirus: It’s Called...