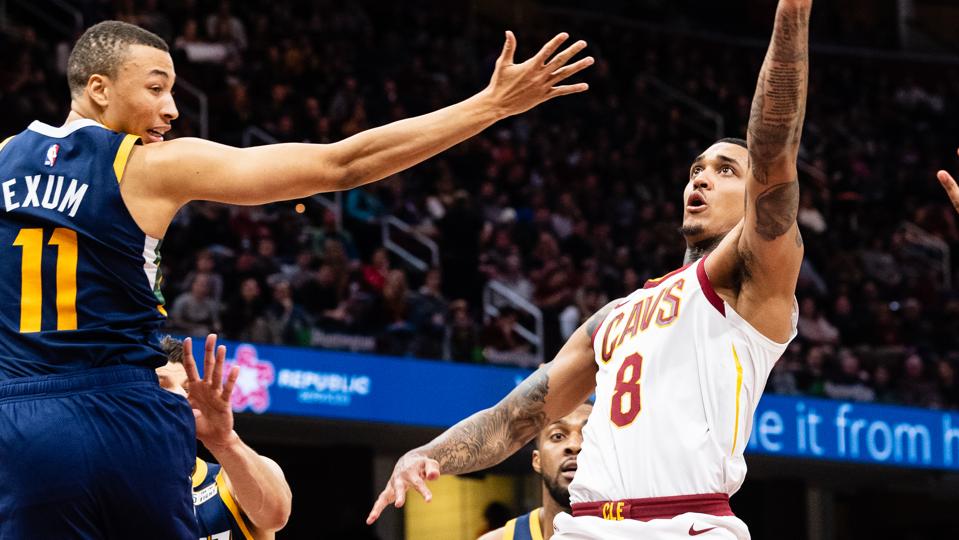 CLEVELAND, OH – JANUARY 4: Jordan Clarkson #8 of the Cleveland Cavaliers shoots over Dante Exum #11 … [+] of the Utah Jazz during the first half at Quicken Loans Arena on January 4, 2019 in Cleveland, Ohio. NOTE TO USER: User expressly acknowledges and agrees that, by downloading and/or using this photograph, user is consenting to the terms and conditions of the Getty Images License Agreement. (Photo by Jason Miller/Getty Images)

NBA trade season is officially upon us and the Cleveland Cavaliers struck first as they dealt sixth man Jordan Clarkson to the Utah Jazz for Dante Exum and two second-round selections in 2022, via San Antonio, and in 2023, via Golden State, per league sources. With this move, the Cavaliers also created a $3.83 million trade exception and are now $5.1 million below the luxury tax threshold. This trade with Utah will mark the third season in a row Cleveland has done business with the Jazz. Before trading Clarkson, the Cavaliers sent Kyle Korver in 2018 and Jae Crowder and Derrick Rose in 2017 to the Jazz.

For Utah, they add arguably one of the best scoring guards in the league to an offense that currently ranks nineteenth in offensive efficiency. The Jazz are also the second-worst scoring bench in the NBA this season, only producing 27.1 points per game but are one of the best three-point shooting teams. Clarkson, who was averaging 14.6 points per game off the bench for Cleveland, can remedy both issues for his new team. He is also connecting on 37.1% of his three-point attempts, which will only add further firepower to Utah’s offense.

For the Cavaliers, meanwhile, swapping Clarkson for Exum doesn’t make much sense upon initial review. Exum is a tall, lengthy player that is quick off of the dribble and has shown potential to be an elite defender. The problem is, he lacks a proper NBA handle and has little confidence with the ball. That, and Exum cannot shoot the ball at an NBA-level and struggles to stay healthy. If Exum is able to play for Cleveland, he operate in their backcourt to counterbalance the team’s lack of defense. That doesn’t seem like the greatest consolation prize for an elite scoring guard like Clarkson.

But, what makes this trade palatable for the Cavaliers are what also comes with Exum. The first part of that being the two second-round selections in 2022 and 2023. Granted, San Antonio and Golden State are both normally elite organizations so they’ll be late second-round selections but there is still value with the picks. By the time those are on the clock for Cleveland, high school players will be draft eligible again and there could be some young talent that could slip through. That, or the Cavaliers can package their haul of second-round selections much like they did when the team acquired Kevin Porter Jr. in the 2019 NBA Draft this summer.

The other consolation for Cleveland is the fact they now have more financial wiggle room to play with leading up to the annual trade deadline. It’s become fairly evident that the Cavaliers are in the midst of a rebuild, or a renaissance as head coach John Beilein once so eloquently put it. They will be looking for opportunities to offload veterans like Tristan Thompson, Brandon Knight and even All-Star forward Kevin Love to assist in this process. Whether it is young players or future draft selections, Cleveland is a full-on seller leading up to the deadline.

With this move, there are also some benefactors on Cleveland’s roster with Clarkson being shipped off to Utah. Darius Garland, who the Cavaliers selected fifth-overall this summer as the franchise’s point guard of the future, can now facilitate the offense without having to share the load with a ball-dominant Clarkson. Collin Sexton, who is better suited long term as a sixth man, could now adjust to this role now that there is a vacancy with Clarkson gone. It also benefits rookies like Porter and Dylan Windler, who will try to match the loss in production as well.

All in all, this was a trade that was certainly surprising but not terrible for all parties involved. The Jazz are able to add an elite scoring guard to their anemic bench unit as they look to make a run at a top seed in the Western Conference. The Cavaliers, meanwhile, are starting the next phase in their rebuild by acquiring more draft assets and taking a chance on an oft-injured player in Exum. This won’t be the last move made by Cleveland this trade season, but it certainly is the beginning.

The New Year Is Going To Be Excruciating For Europe

Nine Ways Retailers Can Adapt To Times Of...