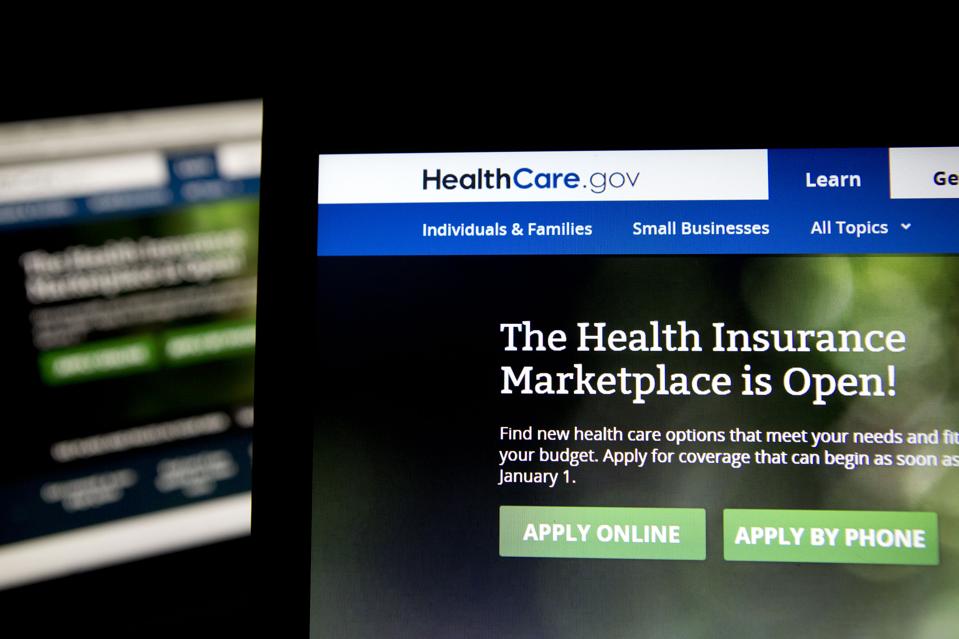 The Healthcare.gov website is displayed on laptop computers arranged for a photograph in Washington, … [+] D.C., U.S., on Thursday, Oct. 24, 2013. Photographer: Andrew Harrer/Bloomberg

Health insurers are preparing for an influx of Americans to enroll in subsidized individual Obamacare coverage and private Medicaid plans as Americans lose their jobs and employer health benefits.

Employers are cutting health benefits as companies close their doors and lay off workers amid the spread of the Coronavirus strain COVID-19. This means a big uptick in government business is in store for private health plans like Anthem, Centene, Cigna, Molina Healthcare, UnitedHealth Group and the Aetna unit of CVS Health.

“While COVID-19’s impact on the U.S. healthcare system and the overall economy may develop in unanticipated ways, we believe that, under all scenarios, government-sponsored health care will continue to play a critical role in addressing the crisis,” Molina president and CEO Joe Zubretsky said last week.

Health insurers like Centene, Cigna, Anthem and Molina that sell individual coverage under the Affordable Care Act known as Obamacare are expecting an increase in enrollment during the second and third quarters. Those who lose coverage through their employer may qualify for Obamacare, according to the government’s healthcare.gov web site.

Many of these large health insurers also offer Medicaid benefits for poor Americans as do Aetna, UnitedHealth Group and myriad Blue Cross and Blue Shield plans that are also expecting enrollment increases. Most state Medicaid programs contract with private health insurers to administer health benefits of their low income and poor residents who qualify.

Centene last week said it expects the rise in unemployment amid the spread of COVID-19 to boost Medicaid and Obamacare enrollment, leading to a revenue increase of $4 billion for the company in 2020.

“We expect economic impact and resulting unemployment to drive increases in members,” Centene chairman and CEO Michael Neidorff analysts last week on the company’s first quarter earnings call. “These increases will be partially reversed as and when the economy reaches the recovery stage.”

It’s unclear just how many Americans will lose their health insurance coverage but Cigna said last week that 50% of its commercial customers that are “seeing an employment disruption are maintaining healthcare benefits” based on executives say they have seen in April.

The numbers losing coverage could run into the tens of millions, according to the Robert Wood Johnson Foundation and the Urban Institute. “About 60% of the 23.8 million workers in the most vulnerable industries and their family members not enrolled in public insurance coverage or employer coverage through a less vulnerable industry prior to the COVID-19 crisis would be eligible for health insurance financial assistance if they lose their jobs,” a report from the groups last month said.

After Six Decades Of Constant Change, JCPenney Needs To Define Itself