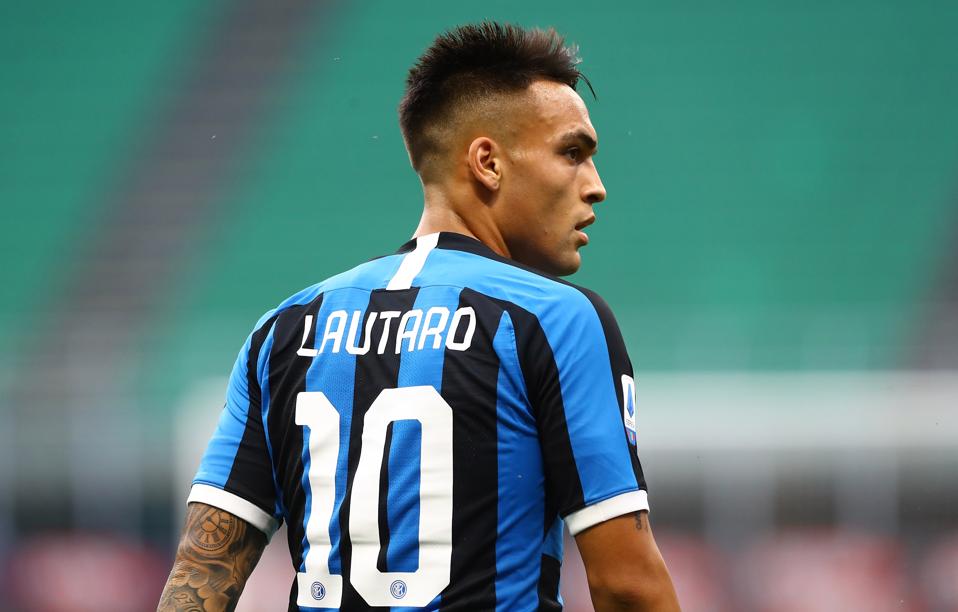 MILAN, ITALY – JULY 01: Lautaro Martinez of FC Internazionale looks on during the Serie A match … [+] between FC Internazionale and Brescia Calcio at Stadio Giuseppe Meazza on July 1, 2020 in Milan, Italy. (Photo by Marco Luzzani/Getty Images)

Inter Milan have lowered their asking price for FC Barcelona target Lautaro Martinez, according to a report.

The striker previously available through the activation is €111mn ($125mn) release clause, it has been claimed by the Italians that this expired on July 7.

This means that any approach for the Argentine will entail alternative figures, but in good news for the Blaugrana, his asking price has been lowered to €90mn ($101mn) according to local newspaper Corriere della Sera on Saturday morning.

In a post-COVID landscape, however, where revenues have been severely impacted by the three-month pause imposed on European soccer, such a sum is still a push for the La Liga giants.

They have recently sold Arthur to Inter’s Serie A rivals Juventus for a cool €72mn ($81mn), but Miralem Pjanic is heading the other way leaving the Catalans with a profit of just €10mn ($11.3mn).

More members of the first team squad will have to be offloaded, then, with ESPN’s Barça correspondents Samuel Marsden and Moises Llorens obtaining information from their sources yesterday on how Martinez has agreed terms yet the sale of Philippe Coutinho may prove key to his successful capture.

Under the employ of the Nerazzurri from 2008-2013, Coutinho made just 28 appearances there due to loan spells at his boyhood Rio de Janeiro outfit Vasco da Gama and FC Barcelona’s cross-city rivals Espanyol.

Rather than heading back to the San Siro for a second stint, however, it is more likely that the Brazil international receives a proposal from a Premier League PINC club in the mold of Chelsea or Manchester United.

Simultaneously, player exchanges have not been ruled out with Inter coach Antonio Conte particularly fond of former charge Arturo Vidal after their success in the early 2010s at Juventus.

Right back Nelson Semedo’s name has also been linked to a switch to Italy, while other available expendables include Junior Firpo, Jean-Clair Todibo and La Masia academy product Carles Alena.

Rumored to have “paralyzed” contract talks while heading for the exit door in 2021, the signing of Argentina teammate Martinez is believed to be vital to captain Lionel Messi’s continuation at the Camp Nou.

Is TikTok Seriously Dangerous—Do You Need To Delete It?