Many of us forecasters have been expecting interest rates to rise, but we’ll have to wait another year for that to happen. The key issue is economic growth strong enough to push inflation up, or at least to make the Federal Reserve worry about inflation rising. The latest economic data have dashed hopes for strong economic growth in 2020. 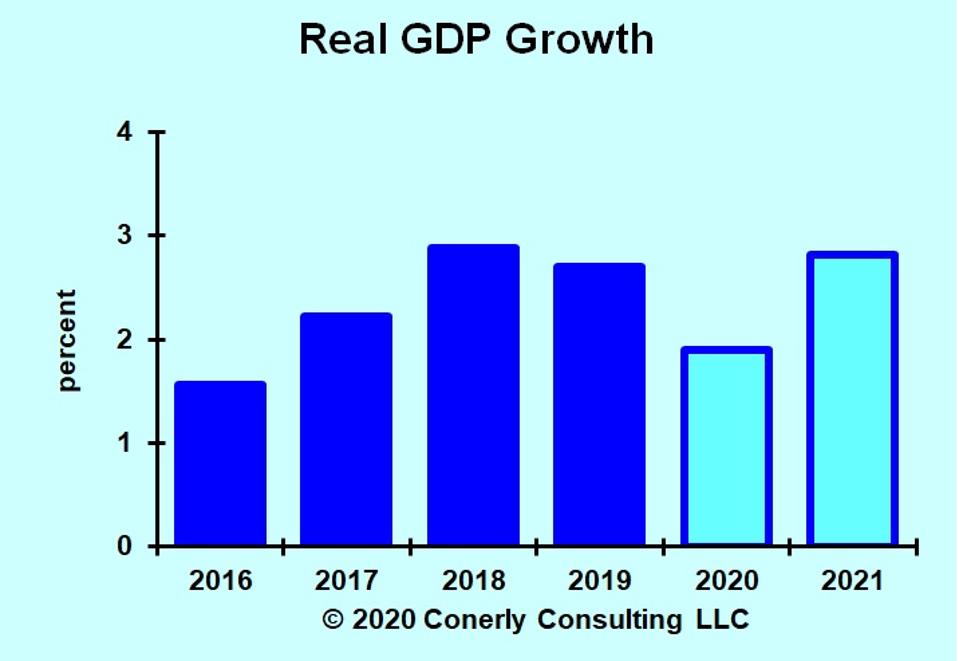 The GDP report of January 30 was not weak in the aggregate—up 2.1% in the fourth quarter. The details remove optimism, though. The outlook isn’t particularly bad, but neither is it very good. In this environment, interest rates will remain about where they are now.

Business worry about international trade resulted in a decline of spending on equipment and software the last two quarters, following two flat quarters. Business spending could surge if the United States settled all outstanding trade disputes—but that projection is a tweet away from failure. We currently have tariffs on steel and aluminum, with exceptions, plus tariffs on many Chinese goods at 25%, and another set of goods at 15% (but dropping to 7.5% soon). Other countries have 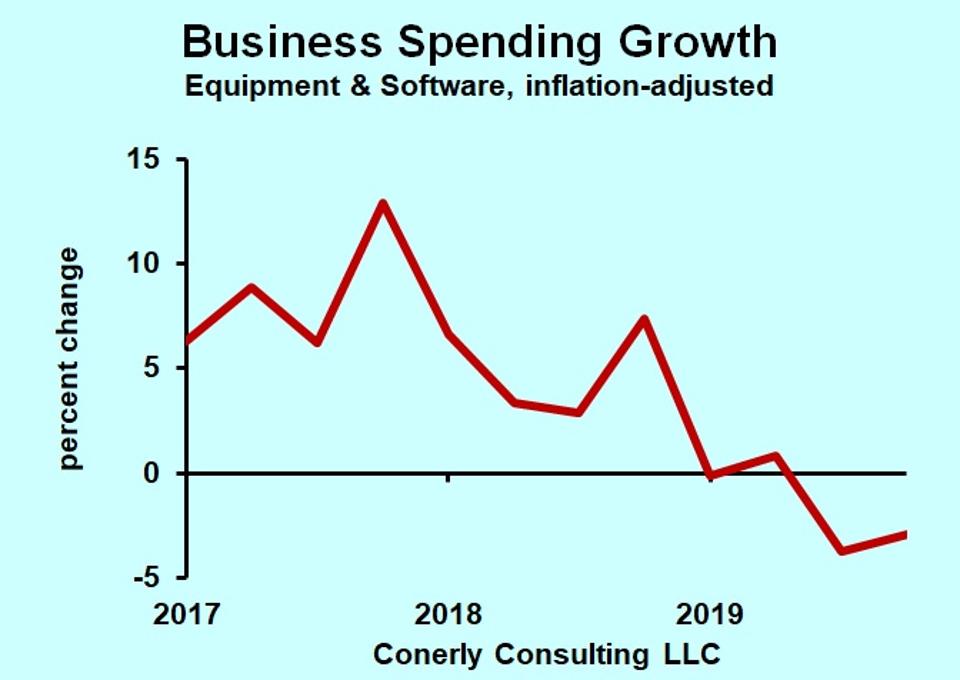 retaliated with tariffs on certain U.S. products entering their countries. It’s a very complicated mess, and political leaders don’t seem to understand the complexity of global supply chains. Capital expenditures are usually predicated on a supply chain: what is best purchased from others, and what is best made in-house. With the supply chain up in the air, capital spending decisions are on hold.

Nonresidential construction has also been falling, though at a fairly low rate of decline. Two long-term trends contributed to the slowdown: electronic commerce reduces the need for retail space, and the shift to open office workplaces reduces the need for office buildings. On top of that, global trade uncertainty delays factory and warehouse construction.

Inventory levels in the United States also dampen the economic outlook. The ratio of inventories to sales has a long history of decline, thanks to better inventory management technology and practice. Since mid-2018, though, inventories have increased faster than sales. Companies won’t likely tolerate sloppiness in their warehouses and supply centers; instead they will trim inventories. In the coming year, a dollar of sales will not trigger a dollar of production. Businesses will produce or purchase a bit less than they sell in order to work down inventories, lowering overall growth of gross domestic product.

As if American problems aren’t enough, the coronavirus presents challenges to the global economic outlook. Definitive economic impacts are impossible to assess right now, but the potential is significant. Factory shutdowns in Wuhan appear trivial relative to the worldwide total manufacturing output, but complex global supply chains mean that one factory shutdown can trigger production stops at factories that use components manufactured in Wuhan. We say that happen after Japan’s earthquake and tsunami and during Thailand’s 2001 floods. Fellow Forbes contributor Willy Shih adds another layer to the problem: “The right question is who has a factory in their supply chain for which there are employees who went home to Wuhan or any of the other cities with significant numbers of infected people for the Lunar New Year?  And what will happen when they start to come back, whenever that turns out to be?” He also notes that many Chinese factories have employees working closely together and living in tightly-packed dormitories. The coronavirus threat is greater in these conditions.

Uncertainty about President Trump’s possible removal from office and the about the upcoming election worries some people, but that’s pretty low on my list of concerns. Most often a change of power—or no change in power—has trivially small impact on business conditions. It probably ranks with the Super Bowl stock market prediction theory. (Root for the 49ers, unless you have shorted the market, in which case you root for the Chiefs.)

Plenty of negatives for the economic outlook have been noted in this article, so let’s turn to the optimistic side of the ledger: consumer spending will grow at a solid pace. Jobs continue to increase, wage rates are rising, especially for the lowest-skilled workers. And consumers have been increasing their spending a little slower than their incomes have grown. Such conservatism bodes well for the economic outlook. Reporters can always find an overextended family, but the aggregate statistics paint a picture of a solid consumer sector. And recall that consumer spending accounts for 68% of GDP.

The weak business spending and moderate consumer spending add up to 2020 economic growth slightly below trend. That will be soft enough that the Fed does not worry about inflation, but strong enough that the Fed doesn’t worry about recession, either. They’ll probably take an extended vacation in the Caribbean and reconvene after Thanksgiving to see what, if anything, they should do. (This is a speculative prediction, not consistent with the Fed’s official schedule.) 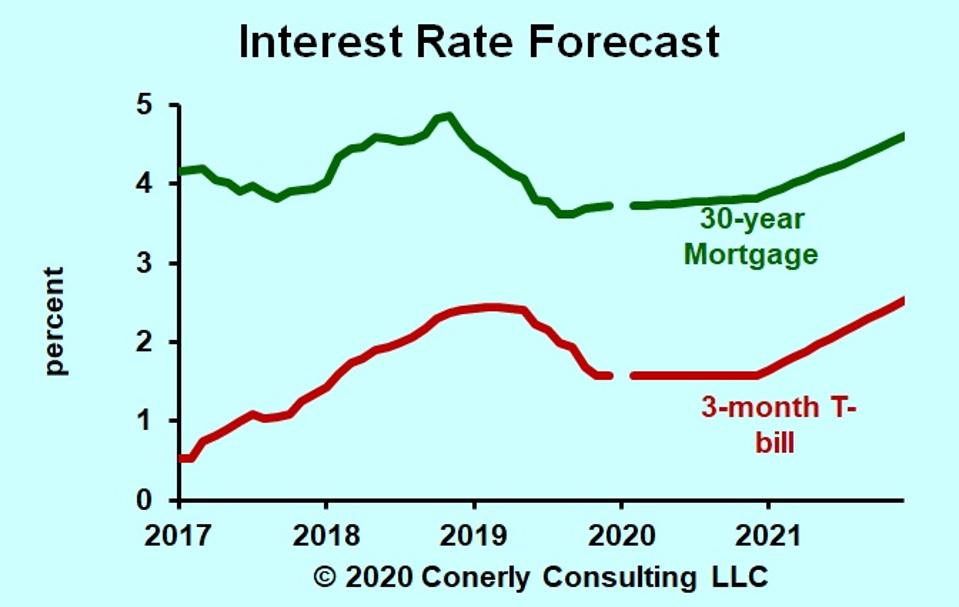 Look for interest rates to be fairly steady over the course of 2020, with strong possibility of moderate increases in 2021, assuming international trade uncertainty has been resolved.

The Opposite: The Market Takes A Cue From...