International Women’s Day: On VC Non-Consensus, Outsized Returns, And Why I Won’t Wear A Patagonia Vest 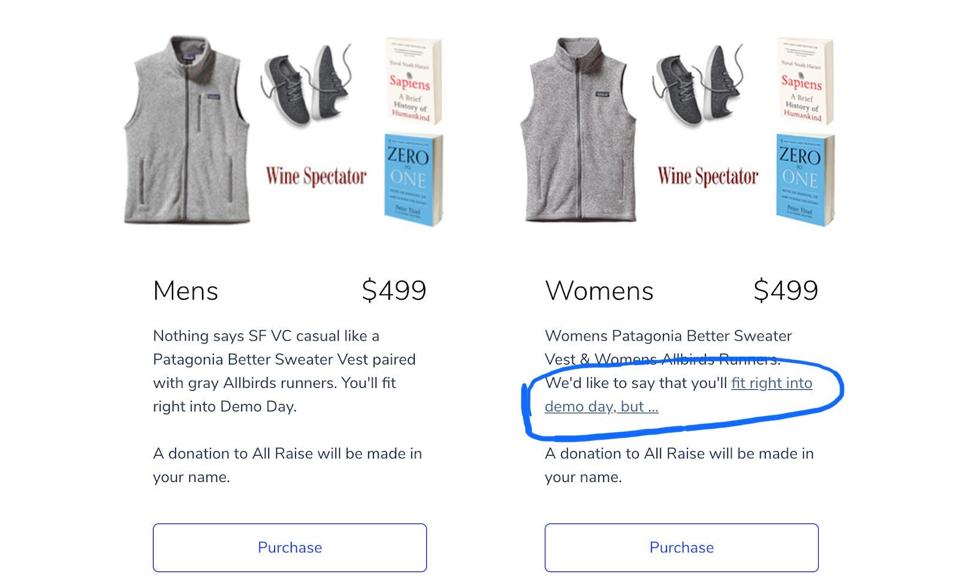 As famously stated by Benchmark co-founder Andy Rachleff,  ‘The only way to make outsized returns in Venture Capital is to be right and non-consensus.’ Inspired by this formula, VCs love asking fellow VCs what they’re excited by that others aren’t. Generalizing slightly, there is an inverse correlation between the responder wearing a cliché Patagonia vest and the likelihood they’ll bring up an opportunity I haven’t thought about before.

Diversity, it seems, is not unrelated to the VC success formula. Intellectual horsepower (+hustle!)  is of course a prerequisite, but coming at problems from a slightly different viewpoint may boost the non-consensus part of the equation.

Despite this, us Venture Capitalists are a comically homogenous group. The stereotypical depiction of VCs as Allbirds- and Patagonia wearing, Zero-to-One-reading, Ivy graduates with pompous theses on everything and anything is ‘funny cause it’s true.’ If you want a laugh on our behalf, head to twitter account @TypicalVC, instagram meme account @prayingforexits or www.VCstarterkit.com.

What’s not so funny is the stats behind the stereotype: only 8% of partners at top venture capital firms are women. This is not only a disappointing reality, but fosters groupthink. If everyone looks and thinks the same we risk over-funding companies that speak to the common denominators among our needs and desires, and underfund those we struggle to relate with. Considering women drive a majority of all consumer purchases this seems particularly unfortunate for the industry and our LPs.

Femtech was for the longest time an underfunded area. Unsurprisingly it was a female VC who first answered “menopause tech” in response to the question on what she was excited about that other VCs were not. Menopause is an example of a pain point almost 50% of the population will experience, yet very little VC dollars have gone into the category until recently. By 2025, the overall women’s health market is slated to become a $50 billion market and there will be over 1 billion women experiencing menopause—equaling 12% of the entire world population—yet it took an influx of female founders and funders to shine light on the market opportunity.

Another market  that could do with an influx of extra x-chromosomes is gaming. The majority of mobile gamers today are women, yet there are almost no women at the helm of mobile game companies—sad if you ask some, a billion dollar opportunity if you ask me. My latest investment Robin Games* is taking on the traditionally male games industry by creating aspirational, sophisticated games on topics one would find in a high-end women’s magazine. By pioneering the first mobile games studio lead by mainly female executives—that can hang with, and ultimately surpass the big boys — Robin Games hope to make a substantial difference to the future of the industry: both the type of content put out and opportunities for women within it.

Diversity is obviously not only about what you can tell on the outside but about diversity of mind. As an investor focusing on consumer I wish more founders set out to build products and services catering not only to matcha-drinking, vegan, $9-juice-loving Millennials (although all three happen to resonate…) but to a target market more representative of what the world looks like.

On this theme, there’s an old a16z podcast episode with Jeff Jordan and Cal Turner Jr, CEO of Dollar General, that does a good job highlighting opportunities in serving the bottom of the nation’s economic pyramid. Dollar General is today the largest US retail chain by store count with a $33bn market cap, yet I see more pitches trying to disrupt small-ish luxury brands than take on this giant.

Much more often spoken about, and potentially over-funded, is Superhuman; every VC’s favorite luxury email application charging $30/month to speed up your email game, recently valued at $260 million by Andreessen Horowitz. Nothing wrong with Superhuman, but when surrounded by VC email ninjas it’s good to remember that not everyone will be willing to spend money on email shortcuts.

So, what’s all this jibberish about, and why on International Women’s Day? This is nothing more than a little reminder that your superpowers are to be found not in the traits you have in common with those around you but those that set you apart. Man, woman, founder, investor—our jobs are to identify what we know to be true about some small part of the world, and build or help release something unique to capitalize on that observation.

If survival of the fittest in VC is about non-consensus, and non-consensus is related to diversity, I can imagine a day where the @TypicalVC account stereotyping our industry makes fun of VCs being a bunch of strange misfits with seemingly no common denominator in gender, style, or background—other than curiosity, hustle, and a bias to believe in the unlikely. And until we get there? Outsized returns for female founders and funders.

*Disclosure: Robin Games is a firstminute portfolio company and Clara serves on their board.