Breaking
Everything You Need to Know About Corporate Social...
Is Adaptive Leadership the Key to Motivating Employees?
Why business events are set to return with...
Business events set to return with a bang!
Expanding Internationally: 5 Things to Consider for eCommerce...
How the Machine Shop Is Going Digital in...
Sustainable Food Packaging Is Helping the Hospitality Sector...
Top 5 Investment Practices To Make More Money...
Managing IT Requirements for SMEs: 5 Aspects that...
How To Build a Successful Luxury Brand In...
Finding The Best Google AdWords Consultant for Your...
8 Top Tips To Help Your Agricultural Business...
Three Reasons Why Office Décor and Design Are...
Looking To Improve Efficiency In Your Business? Here’s...
AI and machine learning for business
How Social Media Changed the World
Home Business Intro To Barcelona Math: How To Make Revenue Of €836m = €990m
Business 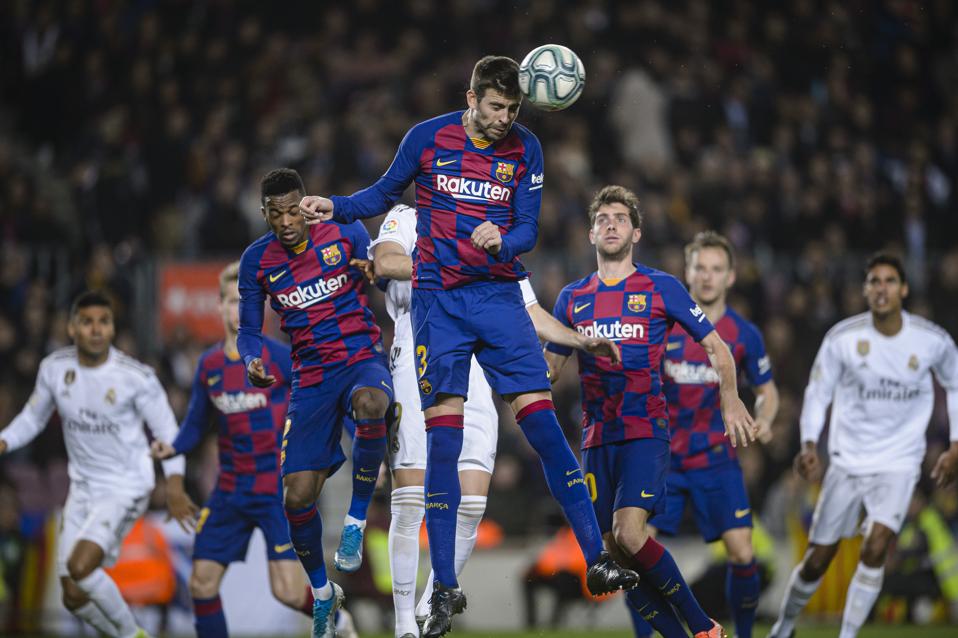 In part one, we looked at Barcelona’s finances, and in particular, how the team managed to usurp Real Madrid to become the Deloitte Football Money League’s top-earner for the first time in 23 attempts.

In order to delve deeper into Barcelona’s finances, there is no better place to start than the club’s Annual Report for 2018/19.

The report is a glitzy 288 pages and is part PR, and part financial and management reports. Within the report is a treasure trove of information and statistics – it is a very impressive document.

Contained in the report is an explanation of why Barcelona management insists that its operating revenue for 2018/19 was €990m when the financial statements say $836m.

The earnings figure of €841m used by Deloitte in its ranking is much closer to the Barcelona financial statement than the inflated €990m.

“The figures Deloitte uses to produce its ranking are taken from the annual accounts published by the different clubs, but it is important to note that it does not include amounts relating to transfer fees or extraordinary payments. That explains the disparity between the Deloitte figure of 840.8 million and the amount of 990 million that Barça included in its own financial statement.”

Here is a reconciliation of the revenue shown in the financial statements and Barcelona’s revenue announcement made in October. 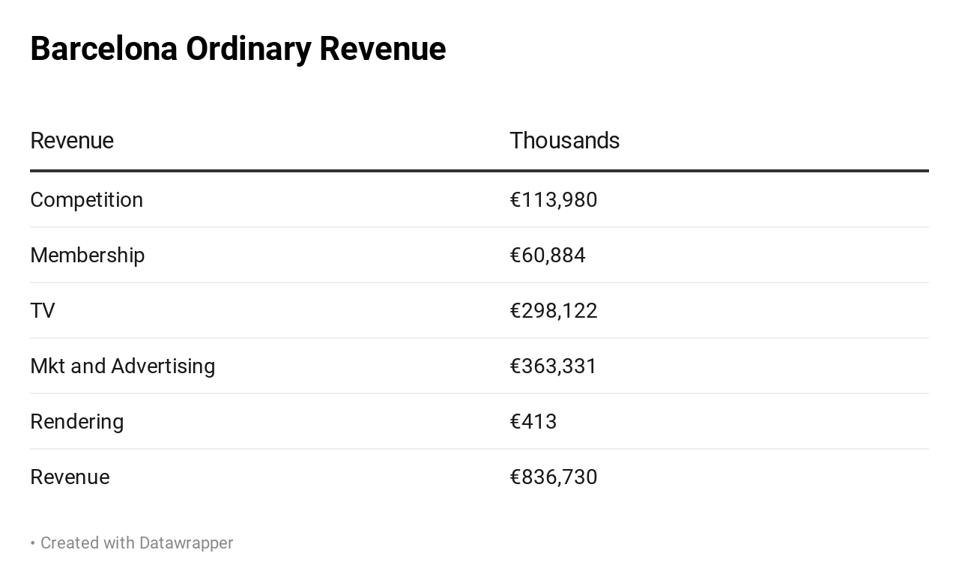 By picking carefully through the rest of the information you can cobble together the operating income (€836m) and extraordinary income (€154m), that gets to Barcelona’s announced €990m. 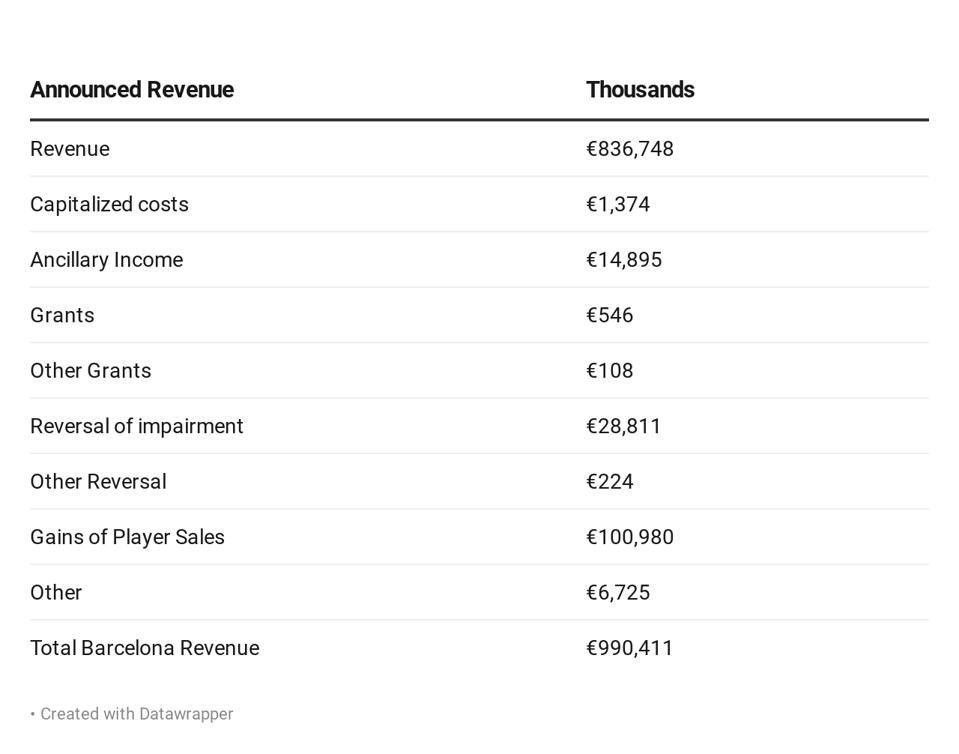 The reason Gain on Player Sales (€101m) is not regarded as ordinary income is on account of its volatility and the distortion that results.

However, the other big number, “Reversal of impairment” of €28.8m, spooked my interest enough to ask the club for an explanation.

Here is the response.

“The reversal of impairment losses on intangible sporting assets refers to the accounting of the value of loaned players. According to the accounting rules, when we have a player who belongs to FC Barcelona but is loaned and plays in another Club, we have to register the expense amount of the annual amortization and also the impairment loss for the same amount (because it is an asset that the Club does not use, and therefore has less value). This would be a double expense (amortization and impairment), and therefore the reversal of the impairment is the mechanism that offsets this double charge of expenses. We do this in accordance with current accounting and auditing criteria.”

The explanation makes perfect sense until you realise that rather than cancelling the original impairment expense, Barcelona treats the reversal as income.

When you cut to the chase the purpose for Barcelona’s calculation of income seems to be driven by image rather than convention. Barcelona wants to be the first team to break the 1 billion Euro revenue barrier even if it means corralling numbers that are out of step with the accepted “norm”.

Barcelona’s structure and the number of operating areas points to the issue of comparisons to other teams. Barcelona operates as a sporting club although the main business is the soccer team. Nonetheless, some of the other entities – as shown in the table below (from page 274) – contribute revenue to the cause although only one turns a profit it seems. 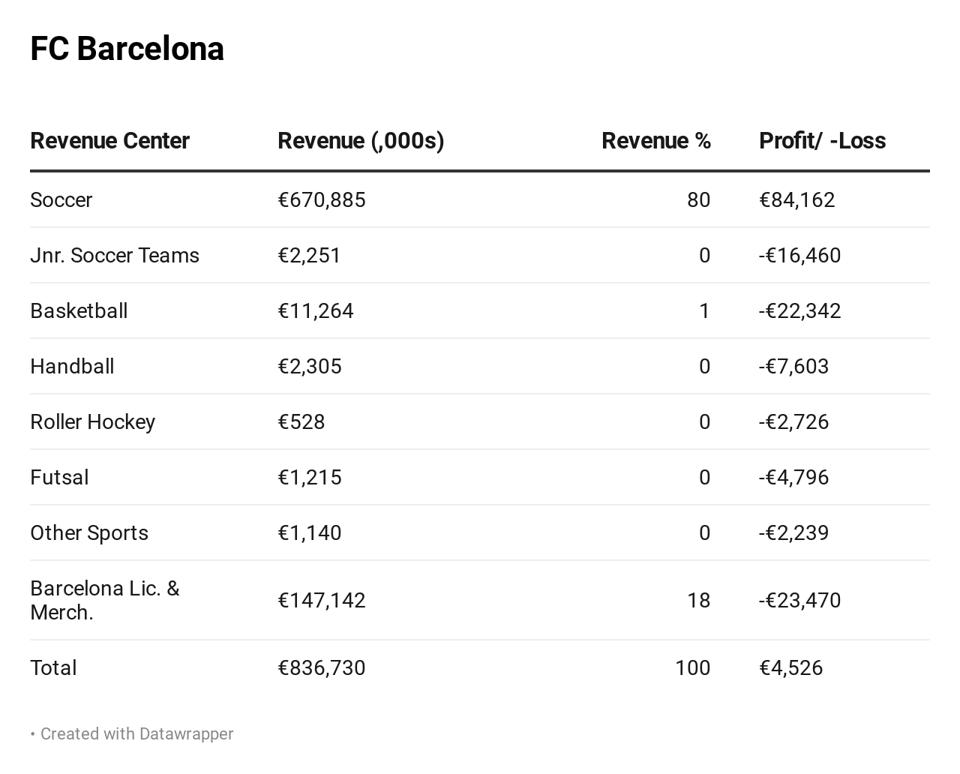 There are many clubs whose sole business is soccer and they rely on relatively simple structures. Another structure is the City Football Group and its ownership of Manchester City and an interest/ownership of seven other teams around the globe. Some costs are centralized and reallocated to each team – a model that is perhaps more an art than a science. Arsenal has nearly 20 associated companies – are they all contributing to the football club’s revenue or are some “less associated” than others?

The issue of matching “apples-to-apples” is becoming increasingly difficult and it will not get any easier.

Dan Jones, Lead Partner of the Sports Business Group at Deloitte, and the driving force behind the Football Money League has seen the financial reporting from clubs grow more complex since the first edition in the last 90s.

“The accounts and financial group structures are more complex now than 20 years ago and that is likely to continue to be the direction of travel as the clubs become bigger, more global and more multi faceted.”

Will Kevin Durant Play For Brooklyn This Season? Nets Reiterate: “No”