Breaking
The Biggest Scandal On Social Media Right Now...
Don’t Hold Your Breath For Biden’s Big Stimulus...
The Rise Of Substack—And What’s Behind It
Be Smart When Shopping For Additional Medicare Advantage...
Finally! The SBA Releases One-Page PPP Loan Forgiveness...
3 Tips To Get Your Website To Work...
Netflix Releases 4th Quarter 2020 Earnings: How Much...
How To Make Entrepreneurial Education 16x More Productive
11 Strategies For Praising Employee Work (Without Causing...
Starbucks Steps Up Its Racial Justice Outreach With...
Startup Surge: Pandemic Causes New Businesses To Double
Consumer Psychology Lessons From Carnival
Is Success Making You Lazy?
AT&T Stock Will Not Go Back To Its...
2021 CES Consumer Storage
Senator Marco Rubio Called Out Twitter For Its...
Home Finance Investors Bearish As The Stock Market Soars
Finance 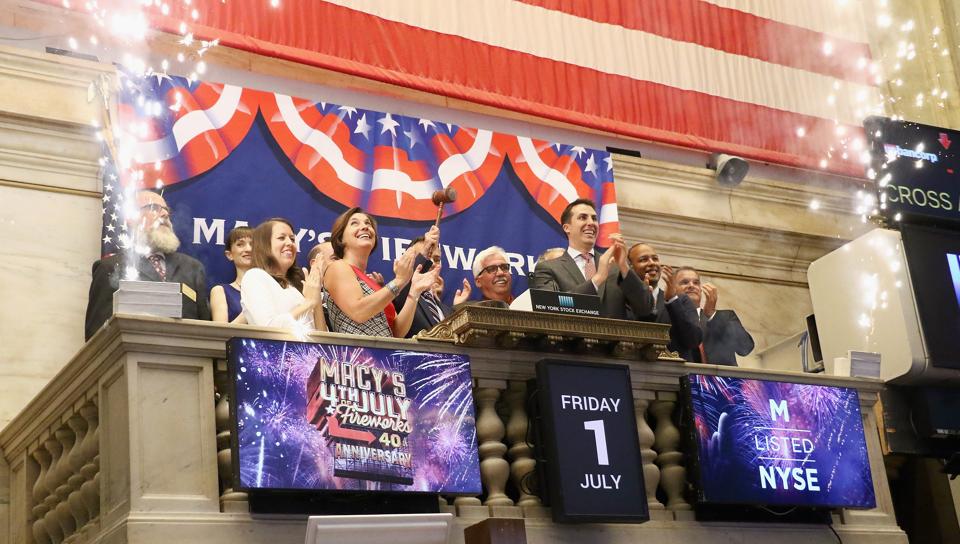 It was another week of better-than-expected economic data, which ended with a record-breaking increase of 4.78 million jobs in June. The S&P 500 rose every day before the jobs report, as last Monday’s early weakness was met with buying.

It was a solid week of gains, led by 5% rallies in both the Nasdaq 100 NDAQ and Dow Jones Utility Average. The iShares Russell 2000 was not far behind, gaining 4.2%, with the S&P 500 up 4%. For the week, 2411 issues were advancing and just 637 were declining on the NYSE offsetting the negative numbers from the prior week.

Many other analysts are also looking at the historical patterns. A study from SunTrust STI found that, with such a strong quarterly performance, the S&P 500 should be higher next quarter and also in the 2nd Quarter of 2021. These historical patterns are quite interesting but it should be noted that the seasonal patterns for the 3rd quarter are generally not favorable.

Since the 1950’s, the S&P 500 has gained 0.5% on average in the 3rd Quarter, compared to increases of 1.9% to 3.8% in the other quarters. In most of the years, the most serious market weakness occurs in August and September, as prices are often slightly higher in July. 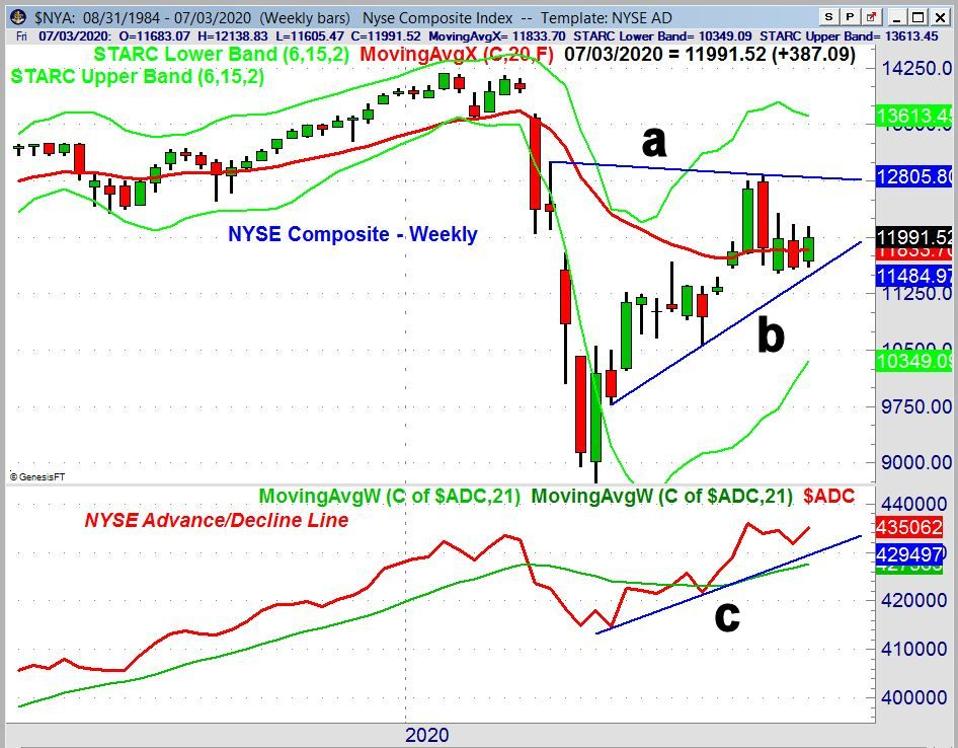 The technical outlook improved with last week’s action, as the ranges in the NYSE Composite have narrowed over the past three weeks. Better support is now developing in the 11,500 area with the uptrend at 11,484 (line b). The close last week was above the 20-week exponential moving average (EMA), with the chart showing next significant resistance at 12,805 (line a).

The close last week favors higher prices after the holiday, as the weekly NYSE Advance/Decline Line turned up last week, nearing the June high. The A/D line is well above its rising weighted moving average (WMA), as well as the uptrend (line c). 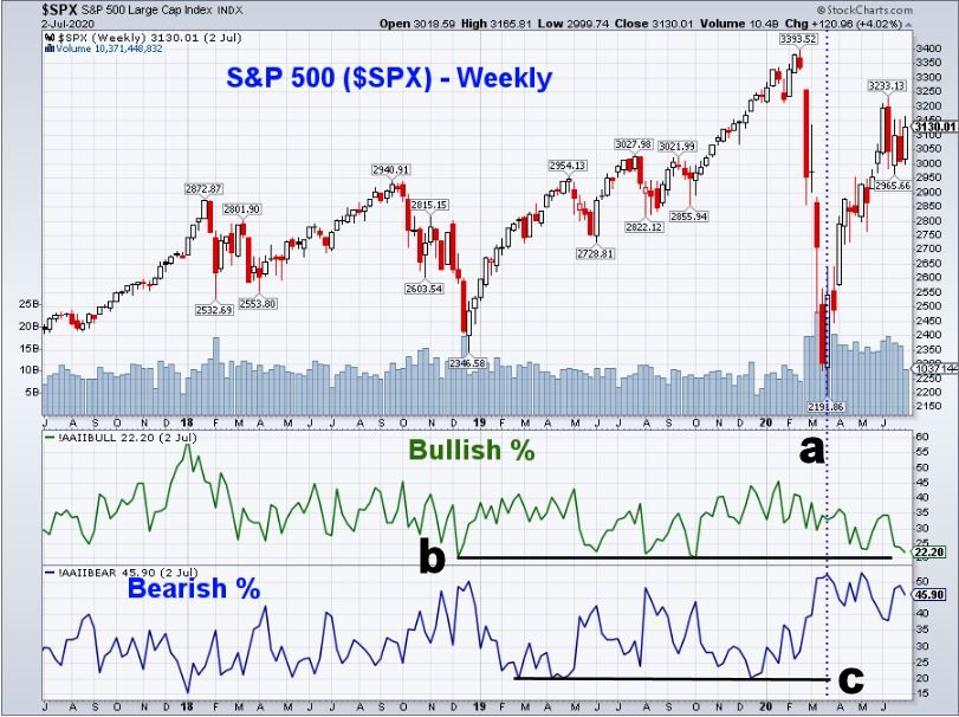 The data from the latest American Association of Individual Investors (AAII) survey may support a further rally. Historically, these numbers are used as a contrary indicator so that the Bullish % is typically near 20% or lower when the market bottoms. There were no signs of the typical low bullishness at the March low (line a), as 34.2% were still bullish. The Bearish % was quite high in March, however, at 52.1%. This level was consistent with a market low.

In the latest reading, the Bullish % has dropped to 22.2%, and is close to the levels seen during the corrections lows in 2019 (line b). The Bearish % is still quite high at 45.9%. As the market was making its high in December, the Bearish % was in the 20% area (line c). Bearish % numbers are often near these low levels when the market peaks. The bearishness is currently high enough that it could take several weeks before it reaches low bearish levels, which is typically consistent with a market peak.

Despite the encouraging weekly technical readings and the recent AAII survey, other factors can’t be ignored. With around 50,000 new COVID-19 cases coming in each day in the United States, many of us are concerned that the news will get worse, not better, in the coming weeks.

With the S&P 500 only 8% below the all-time highs, less than 150 of the S&P 500 stocks are higher Year-to-Date. This is not a healthy sign, especially as earnings season starts in just over a week. As I pointed out last week, the technical outlook for banks and the Financial Select Sector (XLF) does not look positive.

A number of the large banks will be the first to report earnings. Since a majority of companies have stopped giving guidance, it is hard to know what to expect. According to FactSet “the estimated earnings decline for the S&P 500 is -43.9%”. It is not clear now whether the market is ready to accept very weak numbers.

On another interesting note, some of the more defensive sectors, like the Real Estate Sector (XLRE), Utilities Sector (XLU), and Health Care Sector (XLV) made the list for last week’s best performers. The tone early next week will likely be determined by Sunday’s trading in the futures, which play a key role in my Monday morning pre-opening comments.

In my Viper ETF Report and the Viper Hot Stocks Report, I update subscribers with market analysis twice per week, along with specific buy and sell advice. Each report is just $34.95 per month. New subscribers also receive six free trading lessons, a $49 value.

Watching Hamilton Will Give You What You So Desperately Need This Pandemic: Hope