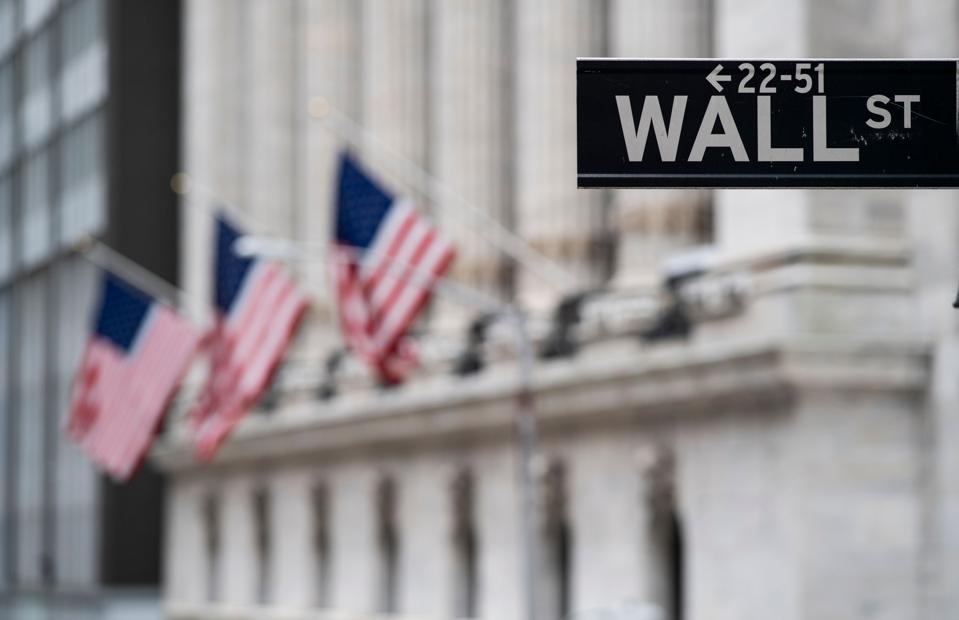 It was another record-breaking week for the stock market, as economic data late in the week helped support investor enthusiasm. Last Thursday’s Philadelphia Fed Business Outlook Survey came in much higher than expected, and the Housing Starts soared on Friday.

In last week’s market comments, I pointed out that the small cap stocks had been correcting for the past three weeks and were reaching important support. Therefore the 2.77% rally in the iShares Core S&P Small-Cap ETF (IJR) last week came just in time. 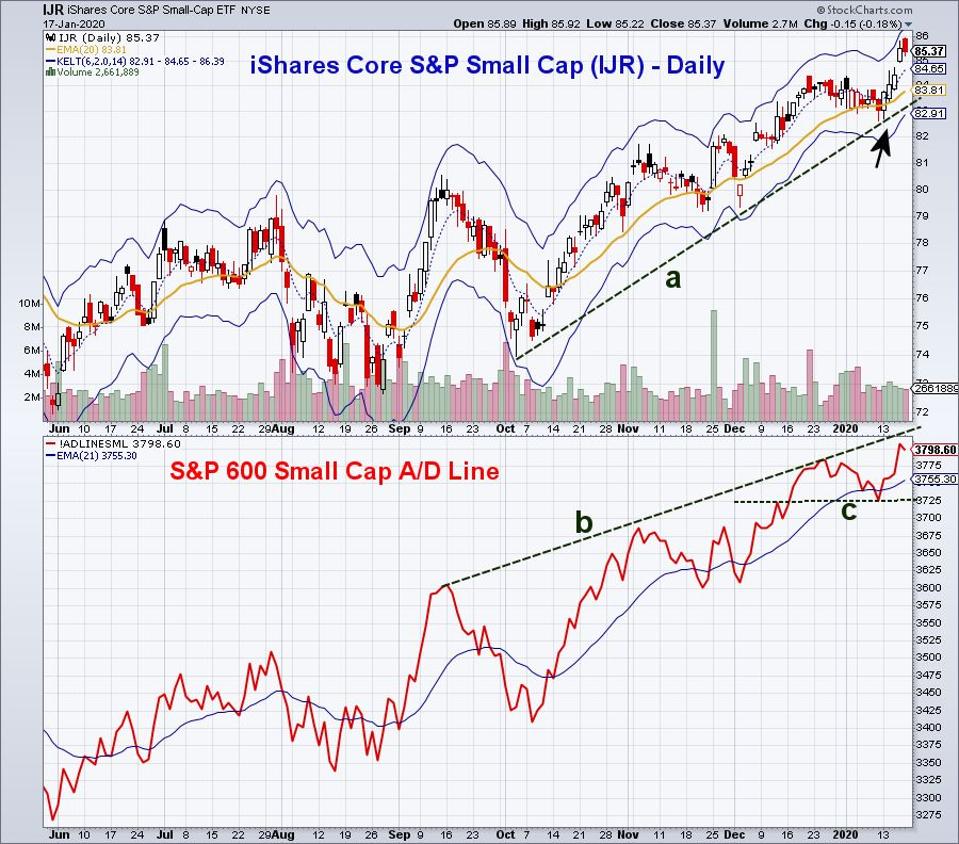 The market gains were impressive, with the Dow Jones Utility Average unexpectedly leading the way, up 3.91%. The Nasdaq 100 Index ($NDX) remained strong, marking another week where it surged well above its weekly starc+ band. This is a continued warning that the $NDX is in a high-risk buy area. The S&P 500 also exceeded its weekly starc+ band this past week. 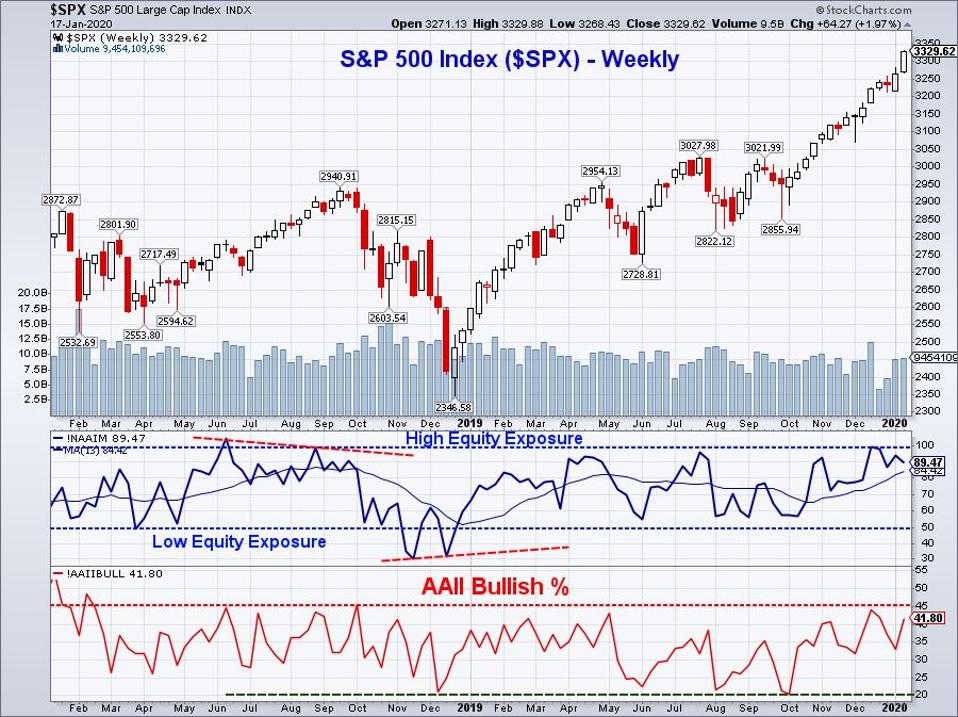 In the latest survey from the American Association of Individual Investors, the percentage of bullish investors (Bullish %) rose 8.76 points to 41.83% which is just below the December readings of 41.89% and 44.09%. As a reminder, high Bullish % readings can often mean there are fewer investors to buy, as they’re already invested.

Plotted above the AAII Bullish % is the NAAIM Exposure Index, put out by the National Association of Active Investment Managers, which tracks the actual changes investment managers have made to their accounts to handle market risk. Although their site cautions investors that the NAAIM is “not predictive in nature”, I have found that there is an interesting correlation between peaks and valleys in the Exposure Index and the stock market. The NAAIM was 94.16 on January 8, and declined to 89.47 last week.

The chart shows that readings in the 90-area have often correlated with market peaks, and as I noted in my June 2019 analysis, the upturn in the NAAIM was consistent with the end of the correction, which turned out to be accurate. Based on my many years of experience, I see these sentiment and starc band readings, along with the attitudes of investors, traders, portfolio managers, and pundits, as a sign of worrisome high levels of complacency. In fact, one investor told me last week that he did “not need to understand the stock market, because it only goes higher”.

A look at last week’s sector performance helps to explain this investor’s sentiment. As we highlighted earlier, the Dow Jones Utility Average was curiously leading the way, and by proxy, the Utilities Sector Select (XLU) was up 3.66%, outpacing the 2.94% gain in the Technology Sector (XLK). There were five other ETFs that were up over 2%, and only the Energy Sector (XLE) was lower for the week.

It is also somewhat unusual for the Consumer Staples (XLP) to perform better than the Consumer Discretionary (XLY) in a strong market. The Health Care Select (XLV) was up 1.64% last week and last week’s technical review of this sector revealed that a number of health care ETFs still look positive.

Given the current environment, both investors and traders should pay special attention to the risk of new positions. This means that popular market-tracking ETFs like the QQQ, SPY or IWM have a much higher risk than ETFs which have been correcting from the late December highs, like the SPDR S&P 500 Bank ETF (KBE). 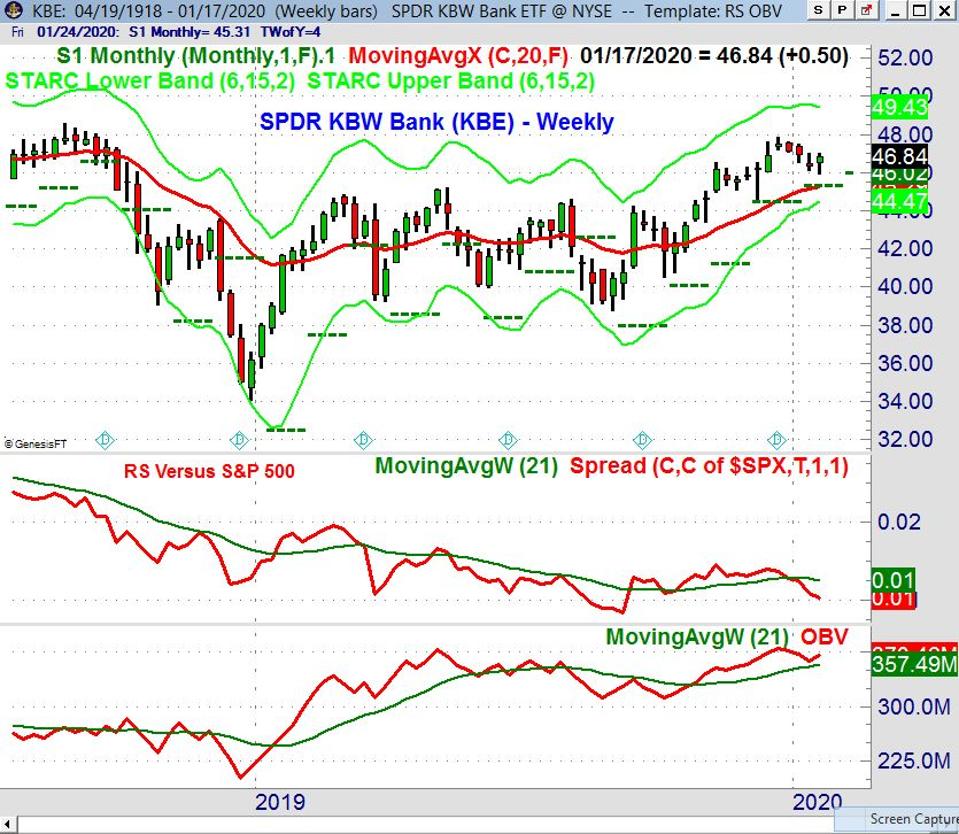 The weekly chart of KBE shows that it peaked at $47.83 and had a low last week of $45.94 before it closed at $46.84. In full disclosure, I recommended KBE to my clients last Monday, with an initial stop under the monthly pivot support at $45.31.

The weekly relative performance (RS) (showing an ETF’s strength against the S&P 500) has dropped further below its Weighted Moving Average (WMA) and is still negative. The on balance volume (OBV) has turned up from its WMA and shows a much more positive trend. Even though most market analysts seemed unimpressed by the first full week of bank earnings, KBE did close higher. That makes the price action this week, more important.

There are still some stocks that have not moved higher with the market, but overall my view is that now is a time to be patient. There will be a much better entry point for market-tracking ETFs in the weeks ahead.

Oil Markets Plunge On Coronavirus Fears, But Will...