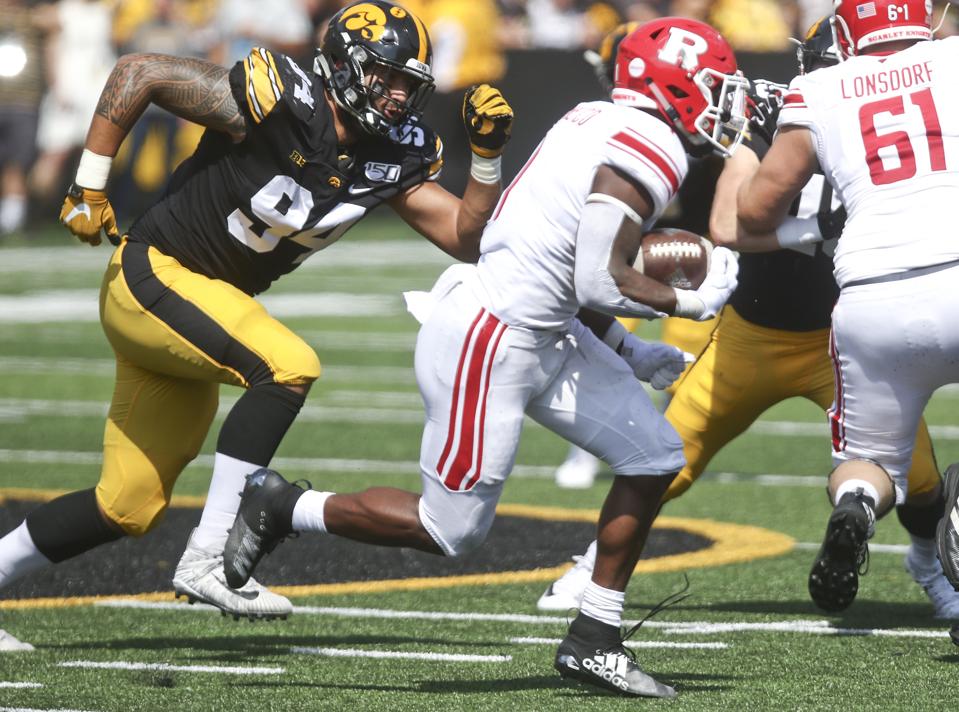 Iowa’s A.J. Epenesa is one of the top defensive ends in this draft.

Note: The NFL Draft begins April 23 and the Green Bay Packers have the 30th pick in the first round. Between now and then, I’ll examine 30 players the Packers could select with that pick.

The following players have also been spotlighted.

Epenesa was the Hawkeyes’ No. 3 defensive end his first two years, but still had a tremendous impact. In fact as a sophomore, Epenesa led the Big Ten with 10.5 sacks, had 16.5 tackles for loss and earned second-team all-conference honors.

After a slow start in 2019, Epenesa finished with a bang and posted 11.5 sacks, 14.5 tackles for loss and four forced fumbles. After a mediocre performance at the NFL Combine, Epenesa slipped down draft boards and is widely considered a late first- or early second-round draft choice.

Epenesa has exceptional length and tremendous power to excel as a 3-4 or 4-3 end. His arms are extremely long and he has heavy hands. Epenesa also played at 280 pounds at Iowa the last three seasons, so he has the ability to add good weight.

Epenesa has been highly productive getting to quarterbacks and sets the edge extremely well in the running game. Epenesa’s first step is outstanding and he already has a bevy of pass rushing moves — many taught to him by his father.

Epenesa has inside-outside pass rushing versatility, plays through blockers and has the rare ability to convert speed to power.

Epenesa’s lower body bend is below average and his effort has been questioned. Epenesa also struggled early in 2019 when teams doubled him with running backs and tight ends. Some teams also question his ability to stand up on the edge in a 3-4.

If Epenesa drops to the end of the first round, though, he could be a steal.

The Packers could certainly use another stout defensive end after they ranked 23rd in rushing defense (120.1) last season and 24th in yards allowed per carry (4.7).

Things got even worse in the playoffs, when Green Bay allowed 197.5 rushing yards per game and 6.0 yards per carry. In the NFC Championship Game, the 49ers ran for a remarkable 285 yards on 42 carries (6.8 average).

Of San Francisco’s 50 offensive snaps, 42 were running plays (84.0%). Time after time, Green Bay knew what was coming, but couldn’t stop it.

“They had a great game plan and ultimately they went out and executed their plan a lot better than we did,” Packers coach Matt LaFleur said. “I think there’s a lot of facets we can improve upon moving forward.”

Epenesa, on his greatest strengths: “I’m confident that my best abilities are in the power rush, just using length and using speed and kind of combining it together to move people backwards and make the quarterback uncomfortable by getting in his face.”

ESPN’s Mel Kiper on Epenesa: ““Epenesa, he’s dropped a bit, obviously. When you talk about 40 time (5.04 seconds), that usually conveys to a pass rusher in the NFL. The great thing about Epenesa is you can kick him inside on third down. He has an inside presence, he has versatility. He had great production against pretty good offensive tackles late in the year.”

Iowa head coach Kirk Ferentz on Epenesa: ““He’s got phenomenal ability and he’s got a great attitude and done a lot of good things on the field. But he still has a lot of room for improvement. When he really figures out how to use all those skills he has, it’s going to be a lot of fun for him.”

Epenesa, on what teams would be getting if they pick him: “I think teams should take me because I bring a lot of passion and a lot of energy to the game. I feel like I can be a momentum changer no matter what time of the game it is. Whether it’s trying to get a strip sack and get the ball back to the offense or helping the defense score itself. I feel like I bring a certain kind of energy that brings confidence that the offense or defense is going to pull through.”

Banks Are Sitting On The Digital Economy’s Most...

What Advice Are Venture Capitalists Giving To Startups...

The Power Of Body Language In The Workplace

It’s Time To Challenge Our Preconceptions About AI’s...