Breaking
Time For IMF Climate Coin (1/3)
Why Getting On TV Is Your Best Marketing...
Ask Larry: Can I Take My Social Security’s...
Students Can Get Hulu For Just $1.99 Per...
Documentary Calls Out Stereotypes, Issues Urgent Call-To-Action For...
The Best Preferred Stocks For 2021
China’s Rare Earths ‘Slump’ A Sign Of Domestic...
5 Ways To Promote Team Wellness This Winter
How To Refresh Your Business Ideas In The...
Yelp Is Now Accepting Covid-19 Safety Reviews …And...
What You Should Consider Before Entering An Intrafamily...
The Hidden Drag From The S&P 500 That...
The Flawed Inflation Narrative; And “V” vs. “U”
How, When And Where You Can See A...
Why You Should Stop Using Your Facebook Messenger...
IRS Collections Appears To Be Broken
Home Technology iPhone Contractors Face A Sluggish First Quarter Due To Coronavirus Outbreak
Technology 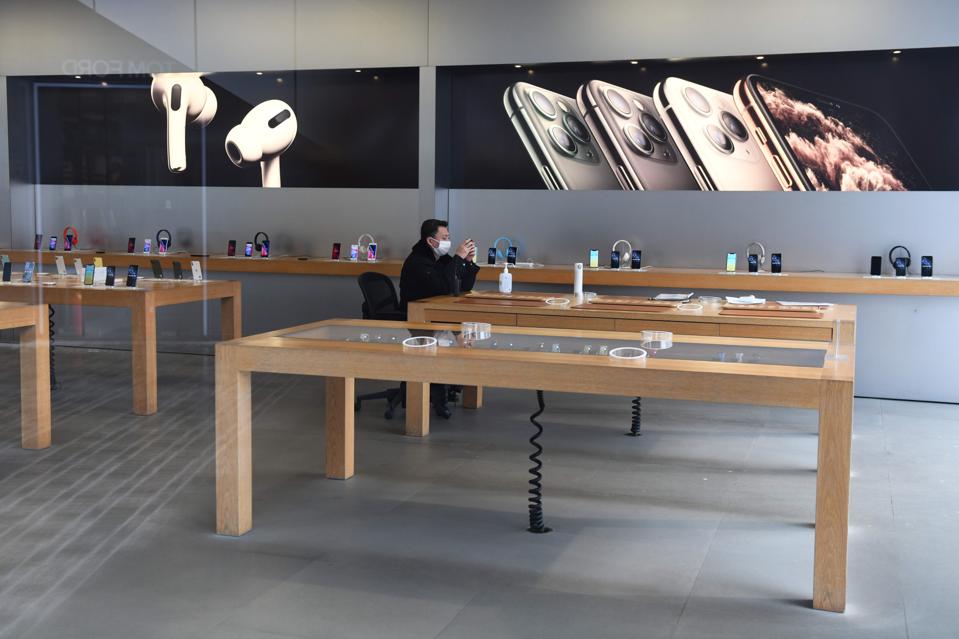 A security guard wearing a face mask looks at his mobile phone in a closed Apple store in Beijing on … [+] February 5, 2020.

Apple is cutting first-quarter revenue forecasts because it’s slower than ever to make iPhones in at core production sites in China. The novel coronavirus outbreak that has infected more than 78,000 people in China has squelched much of the Chinese economy, which is holding back workers and shipments. Those barriers will extend to the list of Taiwan-based tech companies with factories in China that supply or assemble phones for Apple.

Those companies are used to bounces in demand for Apple’s devices. But they will face extra costly losses during the virus outbreak through at least next month as workers are required to stay home—a disease control measure—rather than report for work or deliver supplies, analysts say. The big Taiwan names include camera lens developer Largan Precision, touch module maker TDK, packager ASE Technology and assemblers Pegatron and Foxconn. Analysts estimate 17 Taiwanese companies have a hand in producing iPhones—and they operate factories in China to save money on labor.

“Taiwanese manufacturers play a significant part in the Apple supply chain,” says Pan Chien-kuang, senior industry analyst at Taipei-based Market Intelligence & Consulting Institute. “They often obtain upstream components from Chinese local industry clusters and sometimes they need to import from other provinces, even overseas. Therefore, if the city lock-down in China continues or logistics operations are blocked, Taiwanese manufacturers’ shipments and production will be significantly affected.”

Plants operated in China by Foxconn and Pegatron are already slowing as workers are not allowed to leave home until further notice from Chinese authorities. Smartphone shipments from China across brands will decline 30% this quarter compared to the first three months of 2019, market research firm IDC forecasts.

“Work is starting to resume around the country, but we are experiencing a slower return to normal conditions than we had anticipated,” Apple said in a February 17 statement. The company anticipates missing first-quarter revenue targets announced last month because of lower consumer demand in China and a slow return to work this month due to virus spread controls. “These iPhone supply shortages will temporarily affect revenues worldwide,” the statement says. Taipei-based market research firm TrendForce lowered its first-quarter shipment forecast from 45.5 million iPhones to 41 million.

Largan Precision anticipates a month-on-month decline in shipments to clients for February because of China’s slow return to work, says a company spokesperson. Largan operates one China factory, but not in a virus outbreak area. Its revenues rose 22% year-on-year in 2019 to 60.7 billion New Taiwan dollars.

Foxconn and Pegatron are recruiting new workers and offering bonuses to keep their China plants operating, according to media reports. Neither assembler would comment on would-be business losses, but Foxconn indicated it was adapting to the disease prevention measures in China. “Our teams in each of our facilities in China are working closely with the respective local government agencies and we are continuing to do that as we implement our post-holiday production schedules,” says Foxconn. The company did, however, tell the local stock exchange it expected the outbreak to reduce full-year 2020 revenue.

Factories in question operate outside the coronavirus outbreak epicenter in Hubei province but depend on internal migration of workers who can’t leave the province’s blocked-off cities.

Most Taiwanese firms have enough supplies to make phones this month, but some may “start to suffer from the shortage” in March, says Eddie Han, senior industry analyst at Market Intelligence & Consulting Institute.