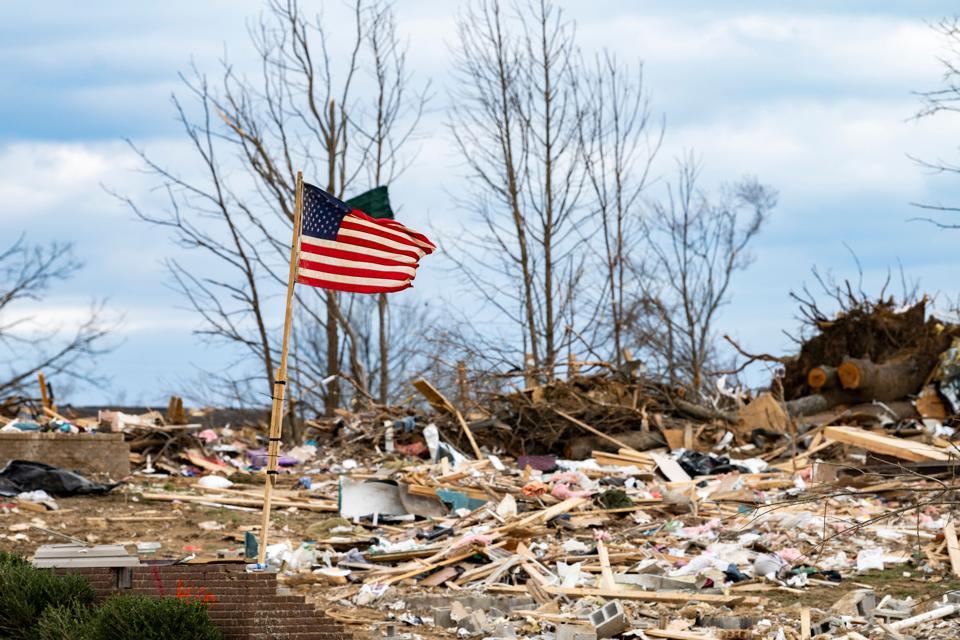 At least 24 are dead in the wake of March 3, 2020, terrible Tennessee tornadoes. They carved a long … [+] scar across Middle Tennessee in the dead of night, racking up a large death toll in the process. (Photo by JIM WATSON/AFP via Getty Images)

At least 24 people have been reported dead, dozens were injured, and tens of thousands were left without power following a series of storms in early March. The National Weather Service reported that at least six tornadoes hit middle Tennessee, including one with winds up to 175 mph (280 kph), reaching EF-4 strength.

In response, the Internal Revenue Service (IRS) has announced that victims of the Tennessee storms will have until July 15, 2020, to file various individual and business tax returns and make tax payments.

The relief applies to any area designated by the Federal Emergency Management Agency (FEMA) as qualifying for individual assistance. Currently, this includes Davidson, Putnam, and Wilson counties. Any taxpayers in areas added later to the disaster area will automatically receive the same filing and payment relief. The current list of eligible localities is always available on the disaster relief page on the IRS website. I’ll also update the list of affected counties here as information is made available.

Here’s what the relief entails: Most tax filing and payment deadlines which began starting on March 3, 2020, will be extended. That means that affected individuals and businesses will have until July 15, 2020, to file returns and pay any taxes that were originally due during this period. This includes 2019 individual and business returns typically due on April 15, 2020, as well as various 2019 business returns due on March 15, 2020. This also means that affected taxpayers will have until July 15, 2020, to make 2019 IRA contributions.

Returns and payments that were originally due during this period, including the April 15 and June 15 deadlines for making quarterly estimated tax payments, will now be due on July 15, 2020. The July 15 deadline also applies to quarterly payroll and excise tax returns normally due on April 30. It also applies to tax-exempt organizations operating on a calendar-year basis that have a 2019 return due on May 15, 2020.

Relief also includes a waiver of late-deposit penalties for federal payroll and excise tax deposits typically due on or after March 3, 2020, so long as the deposits are made by March 18, 2020.

The IRS automatically provides filing and penalty relief to any taxpayer with an IRS address of record located in the disaster area. That means that taxpayers do not need to contact the IRS to get this relief. However, if you receive a late filing or late payment penalty notice from the IRS and are entitled to relief, you should call the number on the notice to have the penalty abated.

Individuals and businesses who suffered uninsured or unreimbursed disaster-related losses can choose to claim them on the return for the year the damage occurred – in this instance, the 2020 return filed next year – or the return for the prior year (2019). This means that taxpayers can if they choose, claim these losses on the 2019 return they are filling out this tax season. Be sure to write the FEMA declaration number – 4476 − on any return claiming a loss.

However, remember that the deduction for personal casualty and theft losses has been repealed for the tax years 2018 through 2025 except for those losses attributable to a federal disaster as declared by the President. For more on casualty losses after a disaster, click here.

For more details on available tax relief, you can also check out the disaster relief page on IRS.gov. For information on government-wide efforts related to disaster recovery, visit disasterassistance.gov.

VAR And Messi Decide It: FC Barcelona Versus Real Sociedad Result And What We Learned

Ask Larry: When Should My Husband And I...