Breaking
U.S. House Passes Bill To Create First Crypto...
Top 3 Lessons For Financial Independence
The Ultimate Guide to Saving Money
Lights, Camera, Action—Is There A Post-Covid Future For...
7 Ways to Reduce Human Errors in Your...
How ‘Couples Therapy’ Used Technology To Cope With...
Can You Settle Your Student Loans Or Negotiate...
7 Best Practice PR Tips For Your Next...
How to Use Amazon Attribution For Ad Campaigns
What are the Makings of a High-Quality Link?
How To Quickly Start And Scale Your Business
Terra Virtua: What NFTs Can Teach Us About...
5 Easy Steps To Prepare Content For E-A-T...
Physical Inactivity Linked To More Severe Covid-19 Infection...
The 2021 Estimated Tax Dilemma: What Tax-Return Pros...
Want To Digitally Transform Your Business? Start With...
Home General IRS Tax Returns Are Due April 15, But Extensions May Reduce Audit Risk
General

IRS Tax Returns Are Due April 15, But Extensions May Reduce Audit Risk 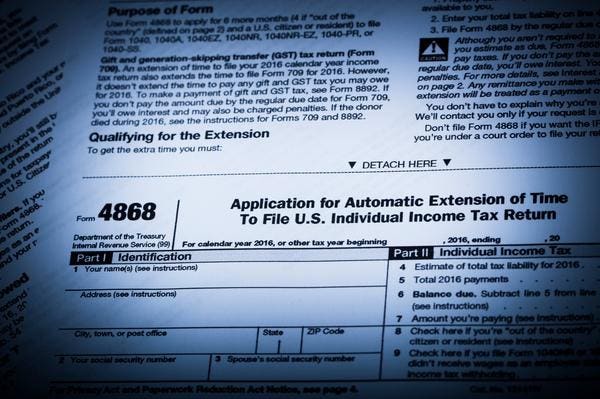 Remember last year? The normal April 15 deadline last year was extended to July 15. This year, there was widespread speculation that the IRS would extend it again this year, but the IRS Commissioner said no. But should you rush to file your taxes on time, or should you go on extension to October 15? Like last year, stimulus payments may be worth considering too as part of your timing decision. If you extend, it is automatic on request, and incredibly easy to do. But should you take advantage of the extra time? If you extend, do you increase your odds of audit? Conversely, maybe you actually decrease your audit odds, or are they the same? There’s no shame in an extension. Millions of them are processed every year. Everyone can automatically get until October 15 by filing (electronically or by mail) a tiny form. It doesn’t even require a signature. It couldn’t be easier. Of course, the extension is to file your tax return, it is not an extension of time to pay. Thus, you need to pay—normally by April 15, but this year by July 15—what you expect to owe when you actually file your taxes later in the year, anytime up until October 15th. But are there good reasons to take the extension? You bet.

Perhaps the best reason to extend is that going on extension encourages reflection and due care. After all, all tax returns must be signed and filed under penalties of perjury.  Many returns filed right at the deadline are filed in haste, some carelessly. That will probably be true in July, maybe even more so than the usual April 15 date. And that can bring on an audit. Extensions can allow time to gather records, consider reporting alternatives, and get professional advice. It is best to file accurately so you don’t have to amend later. Amended returns often come about because people are in a rush. Amending isn’t necessarily bad, of course. There are times you may want or need to amend your return. But try to use amended returns sparingly. For one thing, amended returns are much more likely to be scrutinized. File once correctly so you do not need to do it again.

The IRS doesn’t even have to approve the extension. It is automatic, and there is no discretion involved. You automatically get the extra six months, period. Extensions used to be four months, with two additional months only if you had a good reason. But now, automatic extensions are for a full six months. You may not need all that time, and once you extend, you can file whenever you would like between April 15 and October 15. That time comes in useful in other ways too. For example, going on extension also allows for corrected Forms 1099 and K-1. You may be waiting for Forms K-1, gathering documents or seeking professional advice. Time is on your side with an extension.

If there are debatable points on your return, such as whether a litigation recovery is ordinary or capital, take the time to get some professional advice. Besides, even if you have all your forms ready, what if you receive a Form K-1 or 1099 after you file? It happens a lot, and the earlier you file your return, the greater the risk you will receive corrected forms that may make you need to amend. Going on extension makes it less likely that you will be surprised by a tardy corrected Form K-1 or 1099. You may as well file once and file correctly.

Of course, there are many stories about audit risk. Some people say that going on extension increases audit risk, while some people say the opposite. There appears to be no hard evidence to prove either theory. However, it is worth stressing that there is no evidence that there is an increased audit risk if you go on extension. In fact, on the contrary, given all the advantages of an extension, I believe that an extension can actually help reduce your audit risk. All taxpayers worry about IRS audit risk. Opinions vary, and there are many old wives tales about what triggers an audit. However, it is unlikely that going on extension increases IRS audit risk. The IRS releases data about audit rates based on income levels and types of tax returns.

The IRS does not release data about whether going on extension increases or decreases your chances. But I still say extensions encourage reflection and care, and that alone reduces audit risk. So, going on extension if you need the time can just make sense. To extend, you can submit a Form 4868, ask your tax return preparer, use commercial software, or do it yourself electronically. For more guidance, check out IRS tax topic 304, covering extensions of time to file your tax return.