On June 29, 2020, a report published by China expert Adrian Zenz added yet another layer to the atrocities allegedly perpetrated by the Chinese government against the Uighur Muslim minority communities in Xinjiang Autonomous Region.

According to the findings, “natural population growth in Xinjiang has declined dramatically; growth rates fell by 84% in the two largest Uyghur prefectures between 2015 and 2018, and declined further in 2019. For 2020, one Uyghur region set an unprecedented near-zero population growth target.”

The research suggests that “documents from 2019 reveal plans for a campaign of mass female sterilization in rural Uyghur regions, targeting 14 and 34% of all married women of childbearing age in two Uyghur counties that year. This project targeted all of southern Xinjiang, and continued in 2020 with increased funding.”

Furthermore, it identifies that “by 2019, Xinjiang planned to subject at least 80% of women of childbearing age in the rural southern four minority prefectures to intrusive birth prevention surgeries (IUDs or sterilizations), with actual shares likely being much higher. In 2018, 80% of all new IUD placements in China were performed in Xinjiang, despite the fact that the region only makes up 1.8% of the nation’s population.” 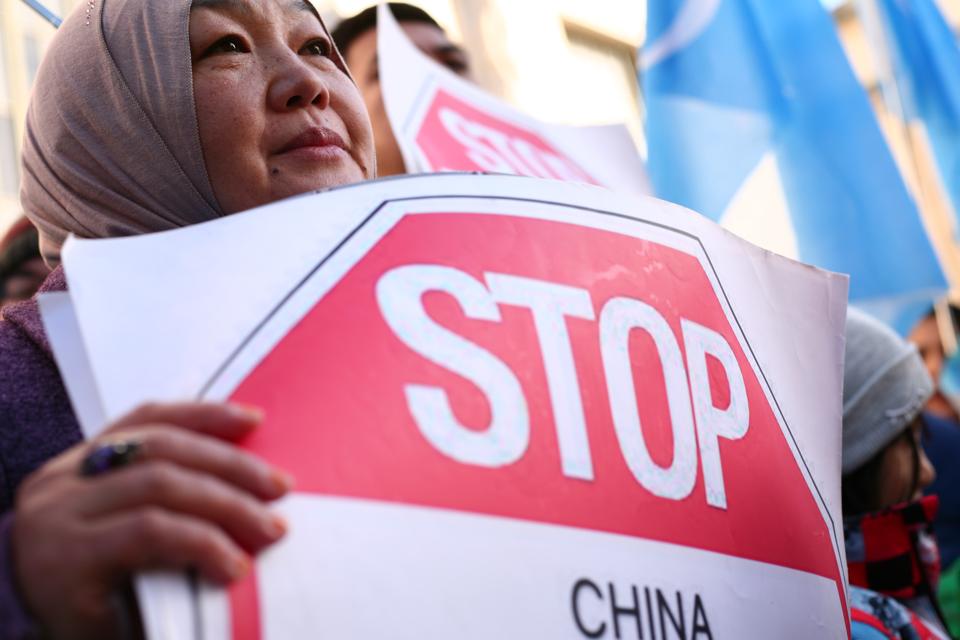 Uighur rights activists rally in solidarity with the pro-democracy movement in Hong Kong and in … [+] protest at China’s treatment of its Tibetan and Uighur peoples at a demonstration for all three causes outside the Chinese Embassy in London, England, on January 19, 2020. In its newly-released ‘World Report 2020’, New York-based research and advocacy NGO Human Rights Watch last week singled-out ‘deepening repression’ by Chinese authorities during 2019, including of religious freedoms in Tibet and in the Uighur homeland of Xinjiang, as the defining feature of what was the 70th anniversary year of the Chinese Communist Party. (Photo credit: David Cliff/NurPhoto via Getty Images)

These findings are worrying, and especially as the atrocities which have already been perpetrated against Uighur Muslim minorities in China have been showing signs of genocidal tendencies. The methods appear designed to bring about the destruction of the religious minority communities in whole or in part, in contravention of Article II of the UN Convention on the Prevention and Punishment of the Crime of Genocide (the Genocide Convention). As the U.K. Minister for Asia, Nigel Adams, emphasized:

“The broader human rights situation in Xinjiang is of ongoing and serious concern to the Government. This includes the extrajudicial detention of over a million Uyghur Muslims and other minorities in political re-education camps, systematic restrictions on Uyghur culture and the practice of Islam, and extensive and invasive surveillance targeting minorities. Further reports indicating that forced labor is being used and that children are being forcibly separated from their parents add to the growing body of evidence about the disturbing situation that Uyghurs and other minorities are facing in Xinjiang.”

The latest report only strengthens the case against China. Indeed, the evidence described by Adrian Zenz is suggestive of China “Imposing measures intended to prevent births within the group”, which is itself a genocidal method under the Genocide Convention, Article II (d).

In light of the new evidence, the Inter-Parliamentary Alliance on China (IPAC), a strong group of senior legislators from several countries, established a campaign calling upon the U.N. to act. Among others, IPAC calls for:

“a resolution to be tabled at the United Nations General Assembly establishing an investigation into the situation in the Xinjiang Region;

for governments to ensure that the appropriate legal determinations are made regarding the nature of alleged atrocities. Including the claims that the People’s Republic of China is pursuing and enforcing a coordinated policy to reduce the population of minority groups in the region;

and for rapid and decisive political action to be taken to prevent the further suffering of the Uyghur people and other minorities in China. The international community must show its determination to defend human rights globally.”

Indeed, the U.N. should act and establish a fact finding mission or a commission of inquiry to consider the evidence of the atrocities perpetrated against the Uighur Muslims (but also other atrocities perpetrated against religious minorities in China, including Falun Gong practitioners and others). This could take place at the U.N. Security Council, with a commission of experts such as those established for Bosnia and Rwanda (although it is likely to be blocked by vetoes from the permanent members), at the UN General Assembly in the same way as the mechanism established to collect evidence of the atrocities in Syria, or at the UN Human Rights Council as many such mechanisms whether for North Korea, Myanmar, Syria, etc.

Whatever option is chosen, it is clear that inaction cannot be justified. How much more evidence do we require to act? How many more reports are we willing to see before we act?

Could The Small Business Response To The Coronavirus Unlock Creativity?

How Will COVID-19 Affect Our Retirement System In...