Home Finance Is Inequality Part Of The American Dream, Or The End Of It?
Finance

Is Inequality Part Of The American Dream, Or The End Of It? 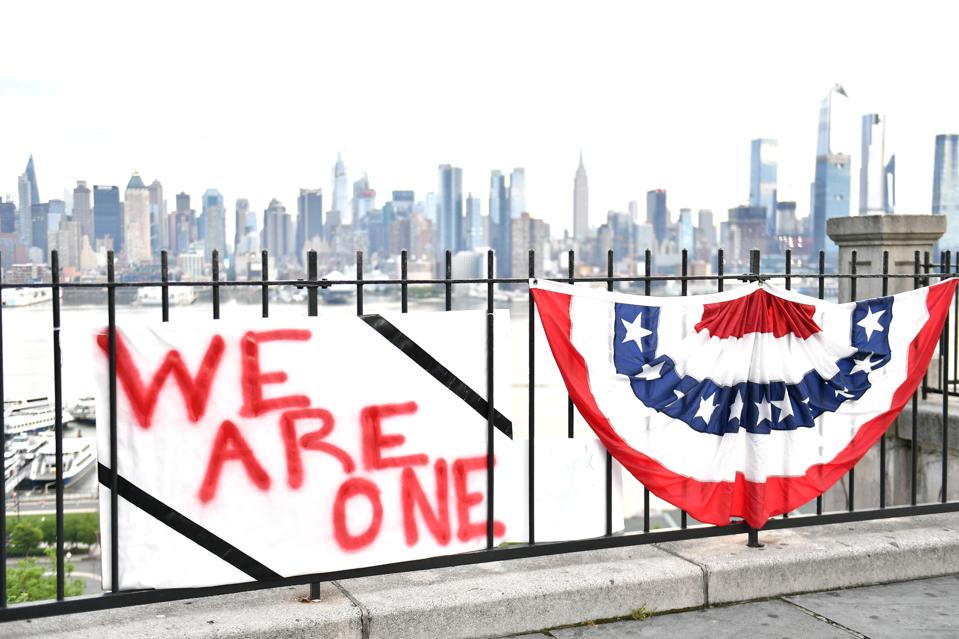 WEEHAWKEN, NEW JERSEY – JUNE 03: A message of peace and equality in honor of George Floyd hangs on a … [+] fence overlooking the Manhattan skyline on Blvd East on June 03, 2020 in Weehawken, New Jersey. Protests continue in cities across the country in response to the death of George Floyd who died in police custody in Minneapolis. (Photo by Michael Loccisano/Getty Images)

A quote that has been rattling around my head recently is ‘aside from the moral case against it, inequality above a moderate level creates a kind of society that even crusty conservatives hate to live in, unsafe and unpleasant’. It comes from a 2004 paper entitled ‘Is globalization reducing poverty and inequality?’ by LSE Professor Robert Hunter Wade.

It has come to mind for obvious reasons – namely the behavior of crusty conservatives in America in the face of stark inequalities across race and class, and the risks that extreme inequality poses to the US.

With on one hand 43 million Americans having now claimed unemployment benefit and on the other, the ratio of the size of the US stock market to GDP (one of Warren Buffet’s favourite indicators of ‘value’) is the most stretched ever, the topic of inequality should rise to the top of the US political agenda, with the death of George Floyd a very grim expression of this.

In the US, and in some emerging countries, inequality, in different forms is rife. Much has been written on income inequality (Branko Milanovic’s work is to be recommended) and there is also increasingly good data to show that wealth inequality is the most stretched in close to a century in the US, and the likes of Russia. What is less widely debated publicly are the other ways in which inequality expresses itself.

Health is one area. Angus Deaton and Anne Case’s work is now well known (he won the Nobel Prize) and shows the deterioration in health conditions, especially those relating to mental health, for middle-aged white men and women in the United States. The mortality rate for this cohort has increased sharply owing to drug, opioids and alcohol poisoning, suicides diseases such as cirrhosis of the liver. Groups with lower levels of education saw a sharper rise in mortality. The coronavirus crisis reinforced this trend.

Another more detailed example of health-care inequality is in dental care. Mary Otto’s book Teeth shows the startling differences in dental health across social classes and reports that they spring from differences in education, diet, and upbringing. In her book Otto tells of a boy who died when a tooth infection, undetected because his parents had no dental-care insurance, spread to his brain.

Technology is another factor that may help cement existing inequalities. For example, in her book Automating Inequality, Virginia Eubanks describes how automation of welfare services through the growing use of algorithms to sift welfare recipients, and in areas like medical insurance assessments, can lead to institutionalized inequalities (the algo- rithm throws out the more needy welfare applicants) and injustice. She describes a regime of data analytics that, through design or error, denies assistance to those in poverty, with low education levels or poor computer literacy, or with a history of mental health issues.

Another example of technology-driven inequality comes from Joy Buolamwini, the founder of the Algorithmic Justice League, whose research initially discovered that facial recognition software was much more accurate at recognizing white faces than black faces. Inaccuracies in algorithmic-based identification can translate into denial of access to social welfare, or misclassification of an innocent person in criminal records.

There is likely much more to describe inequalities that disadvantage according to race, class and sex for instance. The important issue is what is done about them. In the context of the US, the first task is to recognize that inequalities do not stem from globalization but rather how individual countries manage it. The coronavirus crisis illustrated this. A common problem was dealt with in very different ways with disparate results.

Small, advanced economies like Sweden, Ireland and the Netherlands are amongst the most globalized in the world and have relatively well contained levels of (post-tax) income inequality for example. In addition, they are sources of policy ideas on how to combat various forms of inequality.

To understate the matter, I do not expect the current administration to tackle inequality. Indeed the persistence of deep inequalities following the eight years of the Obama presidency shows how entrenched it can be, and I am not sure that the Biden team will make an immediate impact on inequality – to do so would require a radical change in corporate taxes (higher), federal spending (higher) and regulation (especially of tech).

To that end, the persistence of an overly accommodative central bank, a two tiered health system, a technology sector that hoovers up the gains from innovation and a ‘star’ takes all approach in the banking, sports, media and tech industries point unfortunately towards ongoing inequalities in race and class.

In turn, as the election of Donald Trump has shown, the persistence of inequality, will produce radical political choices. My guess is that America has not seen the end of political volatility, and that increasingly new blood, and new parties will enter the political scene.

Until then, America will remain divided. To return to Robert Wade’s quote, crusty conservatives don’t get it. On Friday Fox News displayed a graphic of the performance of the stock market in periods immediately after the king of a black man (From Martin Luther King to the recent death of George Floyd).

Mastering The Psychological Challenges Of A Big Market...

Black Santas Level Up At Malls As Retailers...