Breaking
Top Stocks To Short Today As Markets Fall...
Three New York-Based Sustainable Fine Jewelry Brands That...
This Week In Credit Card News: No-Interest Credit...
Thirteen Predictions For 2021 In Sustainability Private Equity...
How Too Much Optimism On Vaccines And The...
Nine Strategies To Make Your New Year’s Resolutions...
Paper-Free Isn’t Enough: The Keys To Sustainable Web...
The Era Of Multimedia Engagement
Is Twitter’s Stock Move Overdone?
Why Does The Chancellor Refuse To Help The...
‘WandaVision’ Episode 1 Recap And Review: A Crackerjack...
How To Move From An Office To A...
Managing Customer and Vendor Relationships: 4 Things to...
Prince Charles Wants Companies To Raise £7.3bn For...
$3 Million Martian ‘Drone With Claws’ Set For...
Biden Will Push Congress To Pass $1.9 Trillion...
Home Business Is It Too Early For Luis Enrique To Return To The Spain Job?
Business

Is It Too Early For Luis Enrique To Return To The Spain Job? 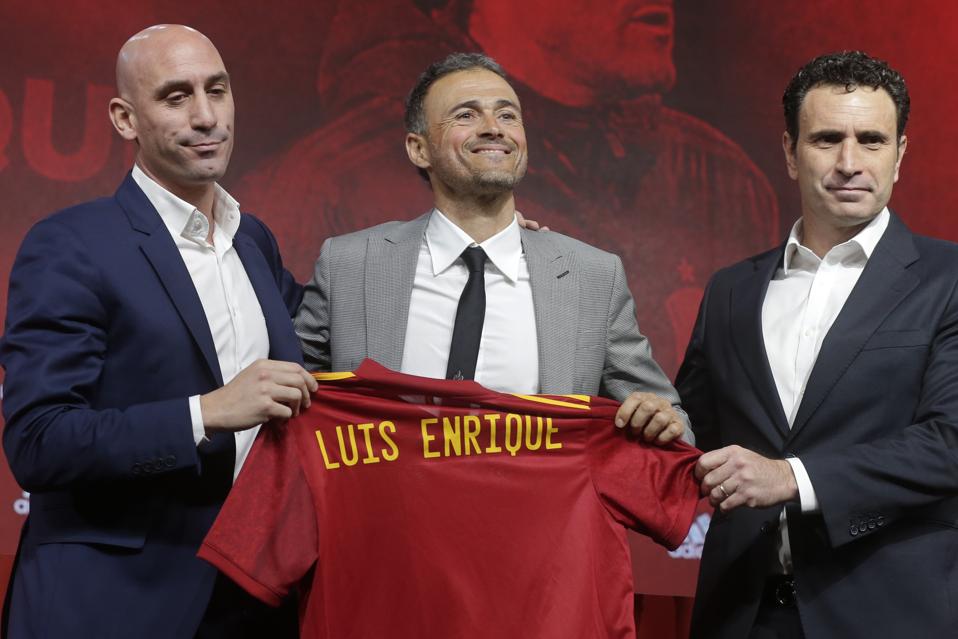 Luis Enrique is back in charge of the Spanish national team. (AP Photo/Paul White)

Whilst anyone connected with Spanish football will be delighted to see Luis Enrique back at the helm of the national team, there’ll be plenty who will be concerned at just how quickly he has returned.

In August, his daughter, Xana, succumbed to bone cancer and passed away. It was precisely the reason why the former Barcelona manager had stepped down beforehand, even though the public had been kept in the dark.

It’s accepted that once the grieving process has been dealt with, that things have to get back to as close to normal as they can be relatively quickly. Indeed, dwelling on the past serves no one, and the process of grief itself is different from person to person.

During the interim period, long-time friend and a man that had worked with Luis Enrique at various clubs, Robert Moreno took the reins.

It was expected that he would take the team through the 2020 European Championships before handing back control to Luis Enrique after the tournament, should the latter be ready to return.

In a blaze of publicity during November, Luis Enrique decreed that he would be taking over again at the earliest opportunity and branded Moreno “disloyal.” He doesn’t need the money so perhaps a thought that if ‘I don’t come back now I won’t get the chance again’ was in his mind.

“The only person responsible for Robert Moreno not being in my coaching staff is me,” Enrique said.

“He came to see me in my house and told me he wanted to lead the team at Euro 2020 and afterwards he would be happy to be my assistant coach again.

“I understand that he has worked very hard to be the coach and that he is ambitious – but for me that is disloyal. I would never do something like that and I don’t want someone with those characteristics in my staff.

“I understand his decision but cannot agree with it and told him I didn’t want him as my assistant and that I felt strong.

“Ambition is to be encouraged but excessive ambition is a defect, not a virtue.”

In response, Moreno didn’t hold back either.

“I don’t know why Luis Enrique doesn’t want me to be with him today,” he told a press conference once the news broke.

“I think he labelled me with words that are ugly and are not attributable to me.

“In a first meeting with Luis Enrique, he told me that I had done what I had to do and that he felt proud of me.

“Then I asked him for a meeting to give him a hug and convey my support. It seemed appropriate to tell him that, just as I had said before, I would step aside if he decided to return.

“He said that seemed perfect but he told me that he no longer wanted me. I was in a state of shock. I let the staff know and I wondered what I had done wrong.”

Luis Enrique is free to choose whom he works with of course, but his perception that Moreno has somehow tried to ease him out of the picture is wrong.

Unless there’s more to it than those not connected with the Spain camp know about, surely Moreno’s actions are that of a caring friend and certainly not an enemy?

Never a man to entertain the media circus in any event, Luis Enrique has also been more spiky than usual since being re-announced by Spanish Football Federation chief, Luis Rubiales.

The coach knows his own mind better than anyone, but the evidence already shows a man under stress, without a ball being kicked in earnest.

Would it have not been better for Luis Enrique to take a year’s sabbatical and come back refreshed after the Euros? Time will tell if he’s made the right call.

After The U.K. Election Can Europe Move On, Or Will There Be More Delay?