Breaking
Expanding Your Business Into Spain: What You Need...
Essentials For Your Office Coming Out Of COVID-19
What Can Marketers Learn From Digital Cults?
Why NASA’s James Webb Space Telescope Will Never...
Increasing HR Effectivity and Efficiency through Software Solutions
The Difference Between Building A Startup In Bull...
Fluor Corp Ranked Among Today’s Top Shorts
Common Pitfalls to Look Out for When Buying...
Will the Olympics go ahead this year?
Pack Up the Big Top: Insights from MozCon...
Best WordPress Themes for Blogs
Get Ready To Rip And Tear, As The...
As Economy Recovers, Loan Approval Rates Increase For...
Lessons Learned—Avoiding The Fundraising Errors That Can Sink...
Top Tips to Help You Effectively Manage Your...
Malaysia’s Carsome, Tycoon Patrick Grove’s Catcha Group To...
Home Business Is Russia Hinting OPEC+ Discipline Could Crack In 2020?
Business

Is Russia Hinting OPEC+ Discipline Could Crack In 2020?

There have always been question marks over how OPEC and non-OPEC oil producers would exit their strategy of joint production cuts that have been in place since December 2016, in some form or the other with the participation of 14 OPEC and 10 non-OPEC producers who are described as the OPEC+ group.

Instead of answering those questions, OPEC+ producers actually deepened their ongoing cuts of 1.2 million barrels per day (bpd) by another 500,000 bpd on December 6, following the conclusion of their meeting of ministers in Vienna, Austria.

That market surprise has brought about three weeks of price upticks for both Brent and WTI futures since, bringing the former benchmark close to nearly $70 per barrel. Bulk of the burden falls largely on Saudi Arabia’s shoulders, with the kingdom “voluntarily” cutting output by 400,000 bpd. 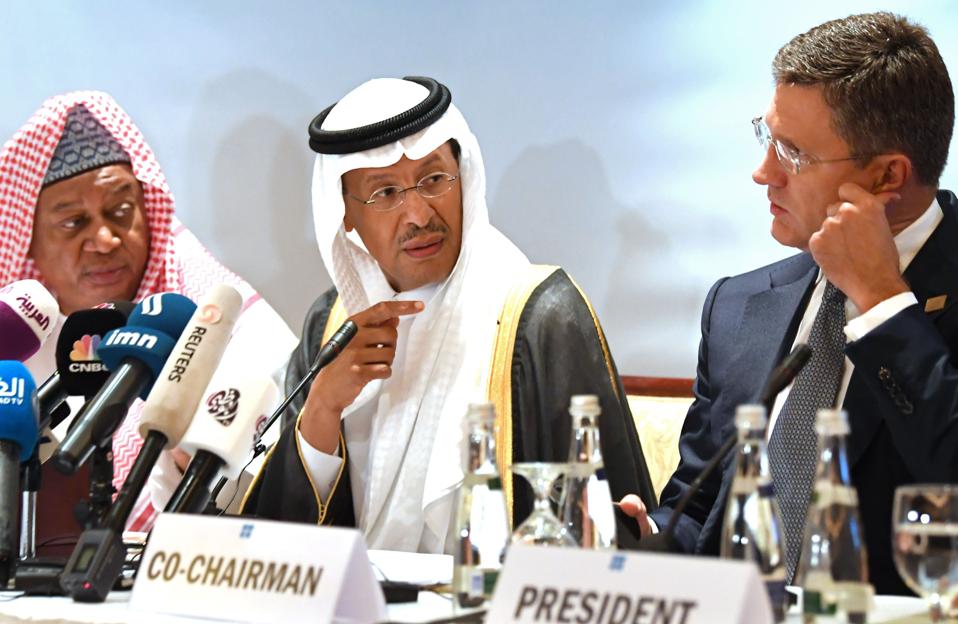 That’s an increase of 167,000 bpd and would keep Riyadh’s headline production at 9.744 million bpd, kicking the can of working out an exit strategy further down the road. Russia, the biggest of the 10 non-OPEC producers, said it would be cutting 70,000 bpd.

The country’s oil minister Alexander Novak said at the time that Moscow wants to avoid any “oil market turbulence in 2020.” But on Friday (December 27), the very same minister expressed the very concern on exit strategy, that analysts have been pondering over for years – Just how exactly will the cuts end given that they cannot go on forever?

“Oil production cuts can’t be eternal; we will gradually need to make a decision on exiting,” Novak said in an interview with Russian state television channel Rossiya24.

The issue is as vexing for Novak, as it is perhaps for every single one of his OPEC+ counterparts, i.e., where do their priorities lie – defending the price or their market share, given that price supportive actions continue to benefit non-OPEC+ producers, including U.S. shale producers, who gain advantage from it but continue pumping without restraint.

Novak’s verdict is that Moscow needs to protect its market share and let its oil and gas companies “develop new projects.”  However, the Russian minister stopped short of saying when his country would withdraw from the OPEC+, diplomatically insisting it is matter for discussion with his counterparts.

OPEC+ meets next in Vienna, Austria on March 4-6, 2020. A moot point in all of this remains – what is Russia actually contributing to the headline cut? The country has failed to meet its end of the bargain, if calculations by data aggregators are anything to go by.

According to Bloomberg, Russia produced 11.244 million bpd on average in November, despite promising to keep its quota at or below 11.191 million bpd. Number crunchers at Reuters, using a ton/barrel ratio of 7.33 to convert official Russian government production data, said the country actually pumped 11.25 million bpd, but should cap output at around 11.17-11.18 million bpd under its OPEC+ pact.

The production trend has continued in December, with Russia pumping 11.252 million bpd so far in December, ~62,000 bpd above target, according to Bloomberg. Only in May, June and July, was Russia’s output anywhere below its pre-December OPEC+ target, and that too was largely down to the Druzhba oil-contamination crisis.

But what Russia actually is doing is impart credibility to the cuts agreement by going along for the ride, at least on paper, if not in terms of physical barrels, and even agreeing to deepen its cuts as it did earlier this month, albeit with a loophole of excluding condensates.

Nonetheless, Novak’s quip that the production cuts cannot go on forever is valid one. When, and not if, Russia breaks ranks with OPEC+, the agreement’s credibility will be shattered and along with the discipline of a number of it participants. Were that to happen in March, the unquestionable impact on oil price sentiment would be net bearish regardless of where global demand is at the time, and whether or not there is a flood of OPEC+ barrels that are currently being kept off the market.

Should You Get A Loan To Pay Off Your Credit Card Debt?